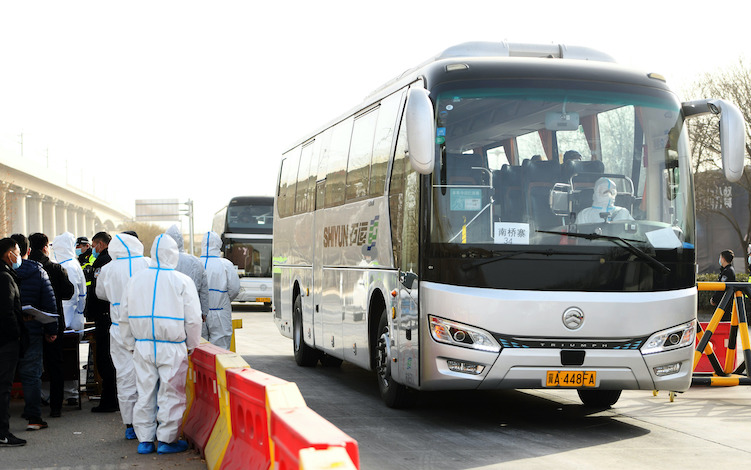 About 20,000 villagers in Zengcun were transported by bus to a quarantine location.

A few hundred new Covid-19 cases prompted three northern cities in China with a combined population of 23 million people to lock down.

Health authorities in Hebei province, which encircles China’s capital Beijing, said the provincial capital Shijiazhuang and the cities of Xingtai and Langfang have been locked down. Travel restrictions have been put in place for the remainder the province as neighboring regions have found infections coming from Hebei.

As of Tuesday, Hebei reported 326 confirmed cases plus 234 asymptomatic cases in the latest round of outbreak, local health authorities said. Most of the cases were found in a mass testing of 11 million people in Shijiazhuang. The city launched a second citywide round of testing.

Late Monday night, two persons who traveled from Hebei province tested positive in the city of Jinzhong in neighboring Shanxi province. One of the two traveled by personal auto from Shijiazhuang’s Gaocheng district, where the latest of outbreak erupted. The other person traveled by train. The village where the two lived was locked downed and is conducting mass testing of all residents.

Beijing also identified a confirmed case with links to the Hebei outbreak, raising fears of further spread in the Chinese capital. The patient commuted while potentially infectious between her home in Langfang and her workplace in Beijing, local health authorities said. Beijing has continued to find new cases in a flare-up in its northeastern district of Shunyi, signaling that the virus is still spreading.

The outbreak in Hebei occurred mainly in rural areas, and 70% of the cases involve farmers, mainly middle-aged and elderly people, Li Qi, director of the Hebei Center for Disease Control and Prevention, said Tuesday at a conference.

Most of the confirmed cases in Shijiazhuang are in the Gaocheng district, the epicenter of the resurgence, and the cases are strongly related, especially to the village of Zengcun, said Shi Jian, an epidemiologist and director of emergency office of the Hebei CDC.

The outbreak’s first patient was a 61-year-old woman from Gaocheng who visited relatives and attended a wedding before she was diagnosed. Health officials said the transmission chain can be traced back to Dec. 20, when many of the infected attended social gatherings like weddings.

The source of the infection is still not clear, but health authorities said evidence showed the cases share an identical strain of the coronavirus that previously had been found only in Russia. Hebei CDC’s Shi told state television that the possibility of the virus being imported through a local airport in Gaocheng is very high.

About 20,000 residents in the village of Zengcun were required Monday night to relocate to a quarantine location. The order raised questions and concerns that it might increase cross-infection risks during the transfer.

A person who has family members in Zengcun told Caixin that her three-year-old child and elderly parents tested negative three times but were still transported by bus to the quarantine location.

“What if someone gets infected during the moving?” she said. “Why they can’t have people tested negative quarantine at home?”