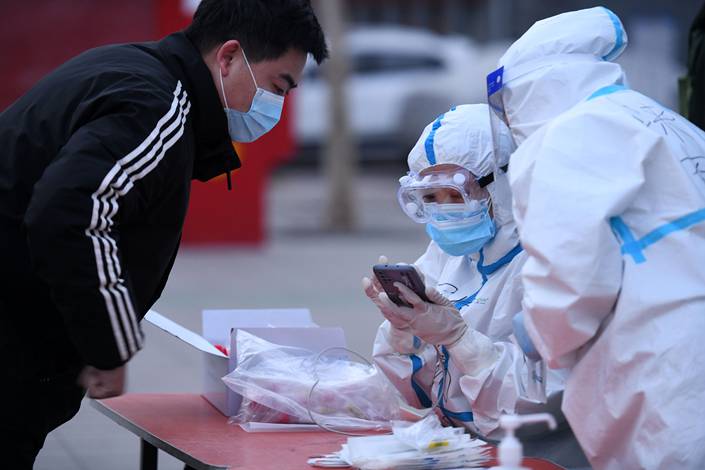 Shijiazhuang carries out its second round of mass testing on Jan. 12.

China recorded its highest number of new Covid-19 infections for more than 10 months on Thursday, propelled by a pair of outbreaks in two northern provinces.

The Chinese mainland logged 138 new infections, 23 more than the previous day, the National Health Commission said (link in Chinese). Of those, 124 cases were locally transmitted, 17 more than Wednesday’s total. The country also saw its first Covid-19 death since May.

Demand for travel tickets ahead of next month’s Lunar New Year, China’s biggest national holiday, seemed to slump after officials urged people to avoid nonessential travel in a bid to curb the spread of the coronavirus, which causes Covid-19.

Although China’s daily case figures are far lower than its initial epidemic, local governments are moving aggressively to quell the outbreaks given the upcoming festival, when many Chinese people traditionally return home and gather with family and friends.

Hebei confirmed 81 new cases on Thursday, 75 of which are in the provincial capital of Shijiazhuang, the province’s health commission said (link in Chinese). The new death also occurred in Hebei.

The industrial province has recorded more than 600 new confirmed infections since Jan. 1, with official disclosures (link in Chinese) from the provincial commission describing cases in children of 10, 6 and 2 years old as well as in infants aged 18 months and six months.

Earlier this week, Hebei health authorities imposed lockdowns on the cities of Shijiazhuang, Xingtai and Langfang, home to a combined 23 million people, and extended travel restrictions across the province.

Heilongjiang chalked up 43 new confirmed cases on Thursday, but concerns about community transmission mounted after 68 people were found to have contracted the virus without showing symptoms, the provincial health commission said (link in Chinese).

The coronavirus can proliferate in the body for several days before symptoms appear. China does not count asymptomatic infections in its official case count.

The most affected region in Heilongjiang is Wangkui county, which added 38 confirmed and 56 asymptomatic cases Thursday. Local state media reported earlier this week that the county had launched a mass testing initiative, urged people to stay home and restricted transport in virus-hit areas.

The simmering outbreaks appeared to dampen the annual rush for tickets along major travel routes ahead of the Lunar New Year holiday, which runs for a week from Feb. 11, as many people postponed or canceled plans to return home.

Unusually, train tickets for Feb. 10 along some of China’s busiest routes remained available on Thursday, more than a full day after formally going on sale. They included journeys between Guangzhou South and Zhanjiang, Guangzhou and Wuhan, Shenzhen and Changsha, Beijing and Chengdu and Xi’an and Chongqing, according to searches on online travel platform Qunar.

Even in cities with few or no Covid-19 cases, Chinese officials have urged residents to limit unnecessary cross-country travel. Some parts of the country also require inbound travelers to show a negative virus test or undergo quarantine upon entry.

In Sanlitun, a major business and shopping hub in downtown Beijing, a large, bright-red wall poster blared: “Don’t leave the capital or the country unless absolutely necessary.”