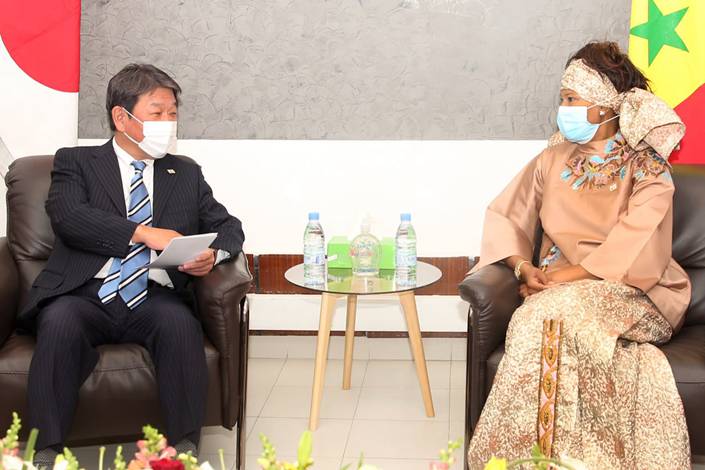 (Nikkei Asia) — Japan and China have intensified their diplomatic efforts in Africa, looking to maintain a political foothold on the continent in a post-coronavirus world with a new U.S. administration.

Japanese Foreign Minister Toshimitsu Motegi returned home Thursday after touring Senegal and Kenya, as well as five Latin American countries. This was his second trip to Africa in two months.

“We were able to build a foundation for Japan to exercise leadership in forming a post-coronavirus global order,” he told reporters the day prior in an online briefing.

Motegi insisted on visiting these countries in person despite concerns in the Foreign Ministry and his Liberal Democratic Party regarding coronavirus restrictions, partly as a response to recent diplomatic excursions by Chinese counterpart Wang Yi.

Wang has maintained an active diplomatic calendar even amid the pandemic, visiting five African countries including Nigeria and Congo from Jan. 4 to Saturday. He then embarked on a tour of Southeast Asia on Monday.

Chinese President Xi Jinping has made overtures to Africa as he aims to shore up international support ahead of the inauguration of U.S. President-elect Joe Biden, who is expected to intensify political pressure on Beijing. Xi has promised African countries priority access to Chinese-developed coronavirus vaccines.

“China has made inroads economically and in other fields in Africa and Central and South America,” Motegi said. The Japanese foreign minister is eager to bolster Tokyo’s economic ties to these regions to counter Beijing’s growing clout. During his latest tour, he pushed for more Japanese companies to set up shop there once the pandemic ends.

Motegi also discussed how Japan can help Mexico ratify the Trans-Pacific Partnership trade pact during his stop in the country. Japan chairs the framework this year and wants all 11 members to be on the same page, especially with China expressing an interest in joining the deal.

In Brazil, Motegi affirmed the importance of their trilateral framework with the U.S. to uphold the rule of law.