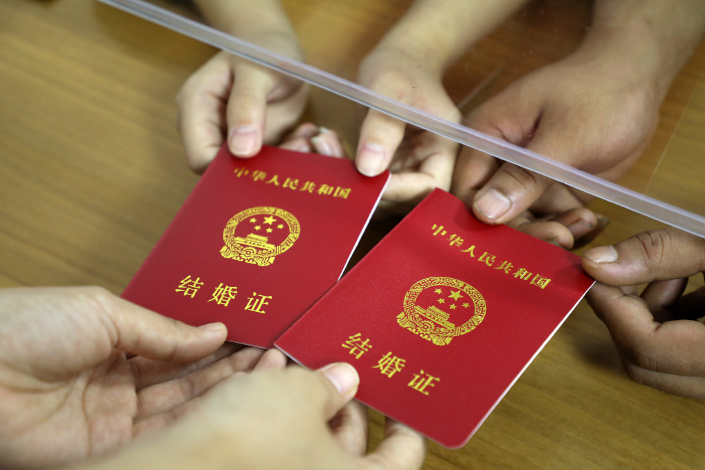 A member of Shanghai’s main political advisory body has proposed that the country set up a premarital investigation system so that couples can find out more information about each other’s personal histories prior to tying the knot.

Xu Shanshan, a member of the municipal People’s Political Consultative Conference and a partner at Zhong Lun Law Firm, said the checks would protect people’s right to know important details about their prospective spouses’ financial, criminal, medical and marital pasts before they legally register their union.

The proposal, which Xu said she planned to formally submit on a trial basis to the local “Two Sessions” political meetings later this year, represents another striking suggested change to China’s marriage laws following the controversial provision in the country’s new Civil Code requiring married couples to undergo a 30-day “cooling-off” period before finalizing divorce proceedings.

“There are currently no relevant legal measures on disclosing information about your (future) spouse. You can only make judgments based on ‘mutual understanding’ and ‘frank discussions’ during the course of your relationship,” Xu said. “This is mainly due to personal privacy restrictions that mean administrative bodies cannot and may not proactively disclose information to the spouse about the other party.”

In her proposal, Xu said that premarital checks would reduce the damage caused by marriages in which one partner did not disclose that they had a transmissible or otherwise harmful disease, such as acquired immune deficiency syndrome (AIDS).

The argument is a nod toward a legal case in Shanghai earlier this month, in which a court annulled a marriage after hearing that the husband, surnamed Jiang, had not informed his pregnant wife, surnamed Li, that he had AIDS prior to registering the union. Neither Li nor her unborn baby were found to have contracted the human immunodeficiency virus, which causes AIDS.

China’s Civil Code, which took effect Jan. 1, requires people with “serious diseases” to inform their partners of their condition before registering a marriage. Failure to do so opens a legal pathway to annulment.

However, AIDS prevention and control regulations forbid the disclosure of the names, addresses, work units, photographs, medical histories and other information about people with AIDS without their consent.

Xu contends that premarital checks would address such issues. She envisages piloting an investigation system in Shanghai that would insert a period of around 30 days into existing marriage registration procedures, during which both partners could exercise their right to conduct checks on information that could influence the decision to get married.

While the partners would define the scope of the investigations themselves, the checks could cover evidence of prior illness, previous marriages, criminal records, outstanding debts or police penalties for violent conduct.

Such probes would lower the probability that people would find themselves in harmful marriages and curb the physical and psychological distress that can persist even after nuptials are annulled, Xu said.

China’s new Civil Code includes a provision requiring couples seeking divorce to wait 30 days for official approval, during which either partner can withdraw their application. The rule is seen as a way to curb the country’s rising divorce rate, which grew from 2.8 to 3.4 per 1,000 people in the five years through 2019, according to government statistics.

While the government said the provision will prevent impulsive divorces, critics argue that it obstructs individual rights and may prolong the distress of people trapped in abusive marriages.