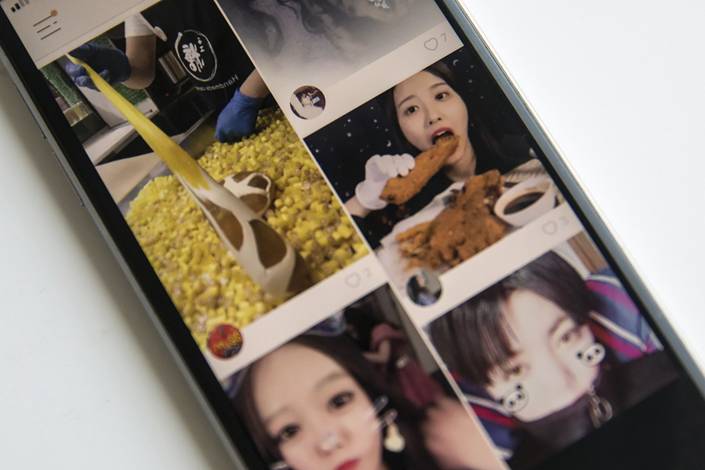 Kuaishou is arranged for a photograph on a smartphone in Hong Kong on Jan. 16, 2018. Photo: Bloomberg

(Bloomberg) — Kuaishou Technology, the main rival to ByteDance Ltd. in China, is seeking to raise as much as $5.4 billion in Hong Kong in what would be the world’s biggest internet initial public offering since Uber Technologies Inc.

The short video startup, backed by Tencent Holdings Ltd., is selling 365 million shares at HK$105 to HK$115 each, according to terms of the deal obtained by Bloomberg News. The company will start taking investor orders from Monday through Jan. 29 and is slated to list on Feb. 5.

Kuaishou is attempting the world’s biggest internet IPO since Uber’s $8.1 billion U.S. share sale in May 2019, according to data compiled by Bloomberg. The Chinese startup’s IPO will also give another boost to Hong Kong’s already-hot capital market and could become Asia’s largest since Budweiser Brewing Co. APAC Ltd.’s $5.8 billion float almost two years ago.

Kuaishou, which means “fast hand” in Chinese, is one of China’s biggest internet success stories of the past decade, part of a generation of startups that thrived with backing from Tencent. Along with TikTok parent ByteDance, the outfit co-created by Su Hua in 2013 pioneered the live streaming and bite-sized video format that’s since been adopted around the world by the likes of Facebook Inc. Kuaishou’s imminent debut could test investor appetite for its far larger rival, which was last valued at $180 billion.

The offering of Kuaishou has attracted 10 cornerstone investors, who agreed to subscribe for $2.45 billion of stock, based on the mid-point of the marketed range. The lineup includes The Capital Group, Temasek Holdings Pte, GIC Pte, BlackRock Inc. and Abu Dhabi Investment Authority, the terms show, confirming an earlier Bloomberg News report. The cornerstone investors have agreed to hold stock for six months in exchange for early, guaranteed allocation.

The valuation of Kuaishou could more than double after its Hong Kong IPO. A top-end pricing will value the Chinese firm at $60.9 billion, up from the $28.6 billion it achieved in a funding round last year, according to Pitchbook. Even at the low-end of range, Kuaishou will still be valued at $55.6 billion.

ByteDance has long been a rumored IPO candidate but was bogged down last year in fighting a U.S. ban on TikTok after the video service was labeled a national security threat. The social media giant was in discussions to raise $2 billion before listing some of its businesses in Hong Kong, Bloomberg News reported in November.

Kuaishou had about 262 million average daily active users as of September, according to its prospectus. That’s still less than half the 600 million on Douyin, the Chinese version of TikTok. That said, Kuaishou’s revenues climbed 49% to 40.7 billion yuan ($6.3 billion) in the first nine months of last year, after it ratcheted up monetization efforts through advertising and e-commerce. While it offers free access to its main platform, the startup takes a cut of the tips users give to their favorite live-streamers who perform viral challenges, lip-sync to the latest pop songs and play video games.

Tencent has about a 21.6% stake in Kuaishou, and other backers include venture capital firms DCM, DST Global and Sequoia Capital China, the prospectus shows. Shares in Tencent jumped as much as 6.4% to an all-time high in early Monday trading in Hong Kong.