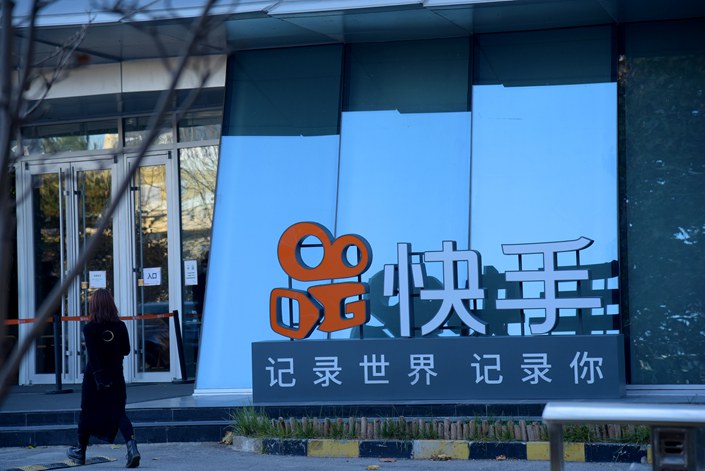 Veteran Chinese short video app Kuaishou is tracking to be first to a public bourse, beating its bigger rival Douyin — the domestic version of TikTok — after it filed for an IPO in Hong Kong last month.

But a Caixin analysis and interviews with insiders at Kuaishou Technology Co. Ltd. show that’s about the only metric the company is leading on.

According to a prospectus filed to Hong Kong regulators last month, the Beijing-based firm has become the world’s largest livestreaming platform, second largest e-commerce livestreaming site, and has the second-largest number of daily active users (DAU) of any short-video company, citing data from iResearch.

But the devil is in the detail. Kuaishou reported 320 million DAUs in the first half of the year, while ByteDance’s Douyin said it had almost double that — 600 million — in August. The firm is also under pressure in its promising e-commerce revenue stream as Douyin builds a more robust, walled-off ecosystem.

Caixin has learned Kuaishou hopes to raise $5 billion in its IPO, valuing the firm at between $40 billion and $50 billion. That would value it about the same as TikTok’s business in North America, Australia and New Zealand combined.

Nine-year-old Kuaishou kicked into high gear in mid-2019, doubling its staff to over 10,000, and restructuring its core businesses. Company sources told Caixin the reshuffles had left some in the firm unclear about who was calling the shots — product head Cheng Yixiao, or CEO Su Hua.

Cheng, who leads research and development on Kuaishou’s core products, holds a 10.02% share of the company and serves as chief product manager. Su Hua has a 12.65% share and controls more voting rights.

After working as a software engineer at tech giant Hewlett Packard and Chinese Facebook clone Renren Inc., Cheng launched the company in 2011 as “GIF Kuaishou,” an animation-maker that achieved runaway success. The company transformed into a short-video site in the vein of the American app Vine in 2012, and brought in $2 million in funding in 2013.

In 2016, Kuaishou’s efforts to capitalize on the emerging livestream sector started to pay off, mainly due to the 40% cut it was taking of digital gifts viewers buy to tip their favorite livestreamers. The company made a profit of 608 million yuan the following year on revenue of more than 8.3 billion — about 95% of which came from livestreaming.

When Kuaishou became the world’s biggest livestreaming platform at the end of 2017, it was not counting on the stellar rise of Douyin. Kuaishou had more than 40 million DAUs in the second quarter of 2017; Douyin had several million.

The way Kuaishou insiders tell it, the company failed to play defense, even though some had warned management not to overlook the smaller firm.

Douyin ramped up marketing efforts after taking in $2 billion in investment in 2017 which valued the firm at $30 billion. Daily active users spiked to 70 million by February 2018. Douyin was setting new fashion trends which translated into product sales. “When searching ‘Douyin’ on Taobao, you would see products from Douyin’s videos, but searching ‘Kuaishou’ would only get you livestreaming equipment,” lamented one Kuaishou insider.

By 2018, Douyin, which was founded just two years earlier, set its annual revenue goal at 20 billion yuan. Kuaishou was aiming for somewhere between 20 and 30 billion yuan that year.

“It wasn’t that (Kuaishou CEO) Su Hua didn’t see the threat from Douyin,” one ByteDance investor said. “But he did not expect it to happen so fast.”

Kuaishou was valued at nearly $20 billion in March 2018 when it received $1 billion from around 10 investment firms including tech giant Tencent. Half a year later, ByteDance closed a $3 billion funding round and saw its valuation more than double to $75 billion. Nearly half of that valuation was for Douyin, several investors said.

All eyes on e-commerce

Kuaishou made a turn into e-commerce in August 2018, and the next year its gross merchandise volume (GMV) — the total value of goods sold on the app — had exploded to 59.6 billion yuan, up from just 97 million yuan. Its revenue from online retail increased 10 times to 259 million yuan in 2019, on the back of a roughly 5% commission it was taking on products bought from partner vendors.

In the first half of 2020, Kuaishou’s GMV rose to 109 billion yuan as the pandemic kept people at home, while its DAU eclipsed 100 million. But the average commission fees it took from transactions dropped to less than 1% because Kuaishou was paying small vendors to sell and remain on its platform, the firm’s director of creative content, He Haoxun, told Caixin.

Kuaishou’s potential to capitalize on livestreaming e-commerce is stronger than Alibaba, if Kuaishou’s 7.2 billion yuan worth of revenue from advertising in the first half is factored in.

Kuaishou said it was the world’s second biggest e-commerce platform in the first half by GMV, after Taobao’s livestreaming offerings. Taobao Live has 400 million users and over 1 million retailers on its livestreams, according to company data from March.

Kuaishou wants to facilitate 250 billion yuan worth of transactions this year, which would see it overtake Taobao Live’s 200 billion GMV for 2019. But He has played down the idea Kuaishou would seek to challenge Alibaba by copying the business model of Taobao or Pinduoduo, saying instead that it will use livestreaming commerce to grow its user base.

To that end, it has partnered with e-commerce giant JD.com Inc. with the aim of enticing users to buy products from JD without leaving Kuaishou’s interface, instead of simply searching and purchasing them on Taobao.

Compare that to rival Douyin, which has been developing an independent e-commerce supply chain, after the August purchase by ByteDance founder Zhang Yiming of a Wuhan company with a coveted online payment license opened the door for his firm to free itself from intermediaries.

Douyin removed links to third-party e-commerce platforms Taobao, JD.com and Pinduoduo from its app in October.

Kuaishou in the north

By 2018, Douyin and Kuaishou had become China’s two largest short-video platforms. But they were markedly different in terms of culture, target audiences and brand image — encapsulated in the phrase “Douyin in the south, Kuaishou in the north.”

Kuaishou had failed to penetrate in China’s hipper southern megacities like Guangzhou and Shenzhen. In 2019, the company ramped up advertising there and launched a blitz called “K3,” with CEO Su Hua targeting 300 million DAUs and 15 billion yuan of revenue in advertising that year. The teams responsible for Kuaishou’s ads business expanded from dozens of people to over sixty and the advertising department was transformed.

The firm achieved a coup when it became the exclusive short video partner for the Spring Festival Gala of 2019, China’s most watched annual broadcast event. That was not cheap — the firm paid 3 billion yuan for the rights — but it did help the company hit its DAU target.

The DAU blitz did not translate into long-term revenue, however. The company made 7.4 billion yuan from ads last year, falling short of Su Hua’s target by half.

The story of ByteDance’s overseas forays is well known. What looked to be China’s first truly global internet success story was disrupted by allegations of data theft, wound up in the crosshairs of the U.S. president, and was targeted globally in a Washington-led campaign.

Unlike ByteDance, which highlighted its international achievements through multiple funding rounds, the touchy issue of Kuaishou’s overseas ambitions was conspicuously absent from its prospectus.

Kuaishou’s Zynn, with which it hoped to tap the U.S. market, has come under attack from American Senator Josh Hawley, who wants the U.S. Federal Trade Commission to investigate the short video app on national security grounds. It has been removed from the Apple and Google app stores for engaging in unfair competition and paying users to watch ads and use the app, which had helped boost it into the top three for downloads in June.

Kuaishou has other international offerings. Aside from Zynn, it has Kwai, which has gained some popularity among Russian teenagers and is now targeting Latin America, as well as SnackVideo in India. Other international products include social media site Lolita, video editing toolkit MVMaster, and short video communities UVideo and VStatus.

Kuaishou has fallen victim to the same geopolitical uncertainties as other Chinese tech firms. Following a violent border clash between India and China in June, Indian authorities introduced tit-for-tat retaliatory measures including a ban on the use of Kuaishou’s Kwai, UVideo and SnackVideo, along with ByteDance’s TikTok, Alibaba’s Taobao and Tencent’s WeChat.

Company sources told Caixin that international expansion was part of Su Hua’s plan, though no systematic vision has been made public. “There’s no clear strategy,” one former alumnus of both ByteDance and Kuaishou told Caixin.

The company has opened offices in 26 cities in countries including U.S., India, Singapore and Indonesia.

In the wake of the planned Trump administration ban on TikTok which is now in limbo, Cheng was asked at a September summit if Kuaishou planned to follow the company into the North American market. “We often cannot reverse broader trends, but we are hoping to bring better services to as many users as we can, even if there’s only a slight chance.”

He Shujing and Zhang Erchi contributed to this story