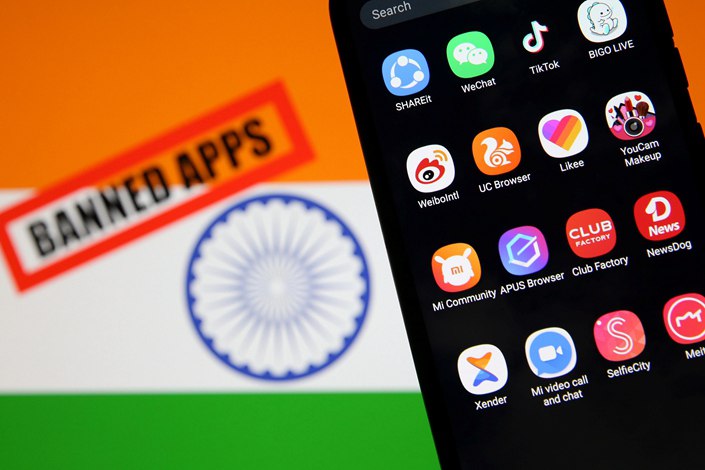 India banned another 43 Chinese apps on Tuesday, bringing the total of prohibited Chinese apps in the country to 267.

The Chinese government has urged its Indian counterpart to level the playing field after New Delhi added dozens more names to its list of banned Chinese apps, as bilateral relations remain cold after border clashes earlier this year.

India’s Ministry of Electronics and Information Technology on Tuesday issued a statement banning 43 apps, including several operated by Alibaba Group Holding Ltd. such as global retail marketplace AliExpress and workplace collaboration software DingTalk. That brought the total number of banned Chinese apps in India to over 200.

“This action was taken based on the inputs regarding these apps for engaging in activities which are prejudicial to sovereignty and integrity of India, defence of India, security of state and public order,” the ministry said in the statement, adding that it issued the order “based on the comprehensive reports received from Indian Cyber Crime Coordination Center, Ministry of Home Affairs.”

Tensions have simmered since April as disputes escalated on a stretch of their mountainous border. In early June, the border saw its first deadly clashes in four decades.

“We firmly oppose the Indian side’s repeated use of ‘national security’ as an excuse to prohibit some mobile apps with Chinese background,” Ji Rong, a spokesperson for the Chinese Embassy in India, said Wednesday in a statement.

Ji said that the Chinese government has always required overseas Chinese companies to abide by international rules, operate in compliance with laws and regulations and conform to public order and good morals. “We hope the Indian side provides a fair, impartial and nondiscriminatory business environment for all market players from various countries including China, and rectify the discriminatory practices violating WTO rules,” Ji said.

Read more
In Depth: What Will Chinese Apps Do After India Ban?

However, neighboring Pakistan took a different approach. In October, Pakistan lifted its ban on TikTok just 10 days after implementing it, setting off a flood of new downloads that propelled it to being the country’s third most popular app.

Indian policy toward Chinese investment was growing hostile even before the border clash. In April, the Indian’s trade ministry toughened its foreign direct investment policy to narrow the scope of eligible investors, a move widely seen as mainly targeted at Chinese companies.

This lead to Alibaba reportedly putting the brakes on new investments in India. The Chinese conglomerate is a key financial backer for some Indian unicorns like payment platform Paytm and food delivery service Zomato.