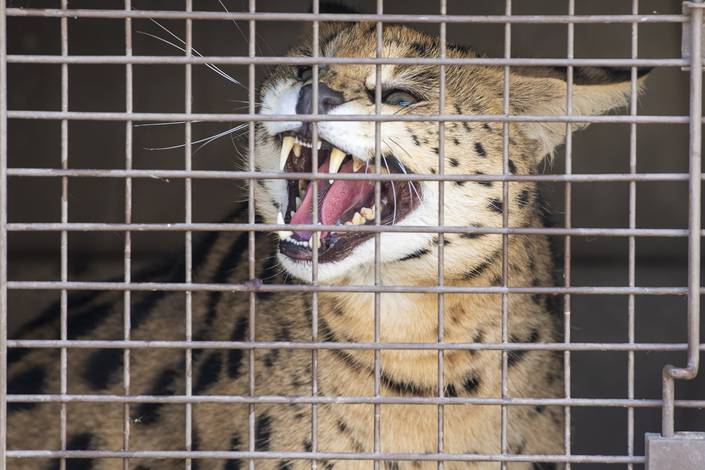 A serval, a cat native to Africa.

Major Chinese short-video platforms are hosting hundreds of videos promoting the trade in protected animals and may be fueling illegal wildlife trafficking, a new report says.

Clips on ByteDance Inc.’s Douyin, the Chinese version of TikTok; Kuaishou, developed by Beijing Kuaishou Technology Co. Ltd.; and Bilibili Inc.’s self-titled platform include content relating to buying and selling protected species, according to a study published by BRC, a conservation group based in Southwest China’s Guangxi Zhuang autonomous region.

The videos, many of which feature comments directing viewers to other platforms where such animals are traded, have racked up a total of nearly 20 million views, the report says.

The study, which was conducted in spring 2020, comes nearly a year after China imposed a ban on wildlife consumption amid a deadly Covid-19 outbreak linked to a seafood market in the central city of Wuhan where live animals were sold. The Asian nation has also stepped up protections for certain endangered species, such as the pangolin.

In total, they discovered 399 relevant clips that had been viewed a combined 19.35 million times, according to the report. They also found 399 accounts from which such videos had been uploaded, including 162 that seemed to engage in large-scale animal breeding or trading, 112 belonging to individual breeders or sellers, and 125 run by what the researchers considered other suspicious-looking entities.

The content ranged from the large-scale rearing of protected species to the display of animal products, the authors wrote, adding that the clips “often touched on the sale” of animals and animal products as pets, food or trinkets, and “may include both legal and illegal situations.”

A follow-up investigation by the same conservation group concluded that many videos are advertisements published in similar forms across a number of platforms to attract potential buyers into private negotiations on social messaging apps like Tencent Inc.’s ubiquitous WeChat. In many cases, it was unclear whether the account owner was licensed to engage in the wildlife trade.

A spokesperson for ByteDance said Douyin is “dedicated to protecting endangered wildlife” and takes “rapid actions” to take down content and suspend accounts that promote the trade in wild animals, adding that the company is developing a feature that will label videos containing images of wildlife with notices encouraging viewers to comply with China’s existing laws. No response was received prior to publication to requests for comment sent to Bilibili or Kuaishou, which has an upcoming IPO.

Chinese law bans the trade of wild animals for food consumption but permits licensed entities to engage in the commercial breeding and trade of many species for non-food purposes like traditional medicine and decorative products. A revision to the country’s wildlife protection law is currently under review.

Short-video platforms should strengthen communication with international conservation bodies and “use technological means” to encourage viewers to act lawfully, the report’s authors said.