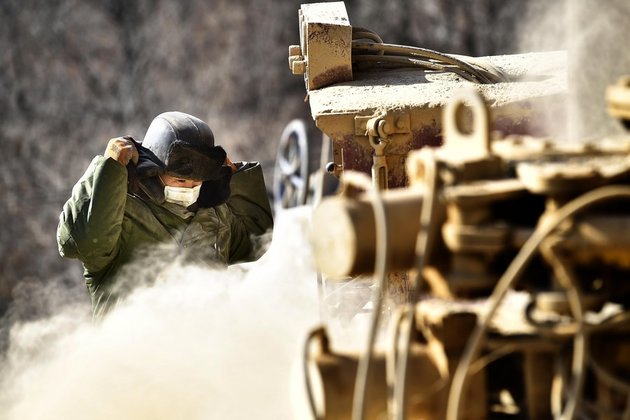 Chinese social media was transfixed Sunday by the rescue of 11 miners from a gold mine in Qixia in the eastern province of Shandong after 22 were trapped for two weeks by an explosion 600 meters underground on Jan. 10. One miner is known to have died and 10 remain unaccounted for. The rescue mission brought back memories of a gold mine disaster in Chile in 2010 that left 33 miners trapped for 69 days.

On Sunday morning, the first of eleven miners was brought up to the surface by rescuers wearing an eye patch to protect him from sensory overload after two weeks underground. On Jan. 17, the rescue team succeeded in making contact with some of the miners, sending flashlights, food, pen and paper and a phone, and receiving notes in return. According to Xinhua, the first note read, “We are in urgent need of cold medicine, painkillers, medical tape, external anti-inflammatory drugs, and three people have high blood pressure.”

The Hushan (笏山) gold mine, owned by Shandong Wucailong Investment, a subsidiary of China’s fourth-largest gold miner, Zhaojin Mining, was in the process of being built. When the explosion occurred, the mine first believed it could handle the rescue by itself, not reporting the incident to the authorities for 30 hours, a delay that is believed to have hindered the rescue and has cost the secretary and vice secretary of Qixia’s Communist Party their jobs.

According to the Central Commission for Discipline Inspection, last year was the first since 1949 in which no major disasters occurred in China’s chemical, fireworks, non-coal mining and industrial sectors.

“Thank you for not giving up on life. Has the brother who wrote the note come up yet?” was the top comment on Weibo, as millions followed each new development of the rescue mission. The rescue seemed to offer China a moment of catharsis, as one by one, the living miners were pulled to the surface. “I cried when I saw these brothers emerge with their hands together in gratitude. Well done!”

Many people were curious about what happens to someone who has been underground for so long, focusing on the eye patches the miners were wearing as they were hauled above ground. People were astounded at how well the miners appeared to be, saying that they seemed to be in a good mental state, still clutching the flashlights dropped to them days earlier.

State media focused on the long delay in reporting the incident, and the repercussions of the delay on the outcome for those who remain in peril.