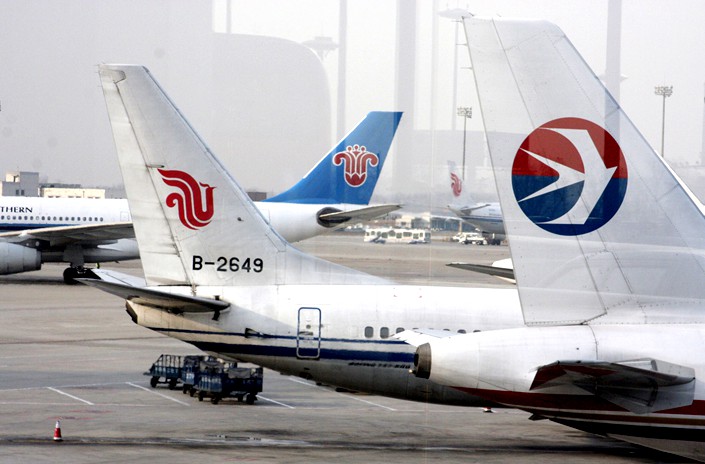 Nikkei Asia — China’s three major state-owned airlines put off delivery of over 100 aircraft from Boeing and Airbus last year — but kept every single order from Commercial Aircraft Corp. of China, in a show of support for the domestic manufacturer during the coronavirus pandemic.

Their choice highlights COMAC’s strategic importance. But given the dominance of the American and European behemoths, the Chinese airlines are expected to fulfill most of their orders in the coming years, as recovery of their domestic aviation market is way ahead of the others.

The big three Chinese carriers — China Southern Airlines, China Eastern Airlines and Air China — held off on a total of 58 planes from Boeing and 53 from Airbus in 2020, according to findings by Nikkei Asia.

Comparing the actual changes in each of their fleets with plans disclosed in their respective annual reports last April, China Southern has put off a net 44 planes, followed by China Eastern’s 43 and Air China’s 24. The airlines had not responded to queries on Nikkei Asia’s calculation by the time of publication.

China Southern, the largest of the three, planned to take delivery of 86 planes while disposing of 37 to expand its fleet to 911 aircraft by the end of 2020.

But it ended up adding only a net five planes, leaving its fleet at 867. While net deliveries from Airbus were three less than planned, the Boeing order was down by 41.

In the case of China Eastern and Air China, Airbus had more orders postponed than Boeing. Both airlines were planning a mass introduction of Airbus — mostly its A320 series — in 2020. But while they planned to increase their Airbus fleets by 37 and 31 respectively on a net basis, actual net delivery was only nine planes each.

The two carriers had placed very few orders with Boeing in the first place. While Airbus added a net 18 planes in their combined fleets, Boeing lost a net 13 planes.

Both Airbus and Boeing declined to comment on orders from specific clients.

The big gainer was COMAC. The three state-owned airlines added a total of 12 of its ARJ21, a regional jet, in their respective fleets, including those of their subsidiaries -- just as they planned.

“Chinese airlines’ purchase of ARJ21 is not a pure business decision,” Fu Xiaowen, a professor at Hong Kong Polytechnic University who specializes in transport economics, told Nikkei. “Under [a] normal situation, Chinese airlines will continue to buy COMAC,” he added.

David Yu, a finance professor at New York University Shanghai who focuses on aviation, echoes that view. “There will definitely be more continued support for COMAC,” he said. “The question is just how fast and how much more addition.”

COMAC is central to China’s ambition to build mid-to-large-sized commercial jets, a field that has long been dominated by the U.S. and Europe. The Shanghai-based company is one of fewer than 100 strategic state-owned conglomerates under the direct command of the central government organization Assets Supervision and Administration Commission, or SASAC.

Central government support has frequently been shown. Feng Zhanglin, head of the Civil Aviation Administration of China, the airline regulator, said, “CAAC will do everything in its power to support the nationally built civil aircraft business” when he visited COMAC’s factory in Pudong, Shanghai, last October.

Despite moves to prioritize COMAC, Chinese state airlines will not be able to simply walk away from Airbus and Boeing. Kelvin Lau, aviation analyst at Daiwa Capital Markets in Hong Kong, said that Air China plans to increase its fleet by 51 planes while phasing out two in 2021, based on statements by the airline’s management at the broker’s conference on Jan. 19. That surpasses the plan for 47 additions and one withdrawal disclosed by Air China last April, and implies that a large part of the delivery will comes from Airbus, with several of COMAC’s ARJ21s.

As for China Eastern, Lau quoted an airline official on Jan. 17 as saying that 30 aircraft will be added on a net basis in 2021, most of them deferred from 2020.

Yu at NYU Shanghai anticipates that most of the undelivered aircraft in 2020 will be deferred to later years, as “there is growth in the local market and there will be demand.” Since international flights are still largely closed and a number of wide-bodied aircraft were switched to domestic and cargo uses, he believes demand could be skewed toward narrow-bodied planes.

Fu also anticipates that Chinese state airlines probably prefer deferral over cancellation, as the aviation market “will have a bright future in the long run,” and that based on this assumption purchasing from either Airbus or Boeing is virtually the only realistic option.

“The eventual decision also depends on the penalties associated with cancellations,” Fu added.

The procurement of aircraft and engines by the big three Chinese state airlines is centrally coordinated and handled by China Aviation Supplies Holding Company, or CASC, and is closely linked to the government’s overall economic plans.

The three airlines had not responded to questions from Nikkei regarding their fleet plans as of the time of publication.