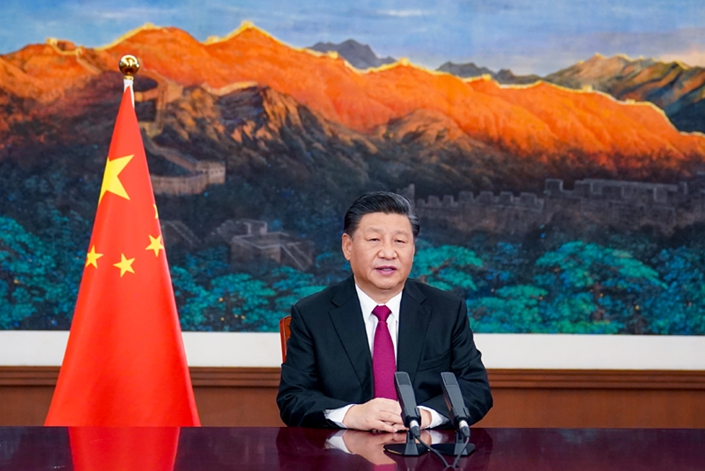 Chinese President Xi Jinping called on the world to step up macroeconomic policy coordination and balance pandemic response and economic development in the face of a "shaky,” “uncertain" global recovery.

Speaking at a virtual World Economic Forum Monday, Xi warned against "ideological prejudice" and called for a path of "peaceful coexistence" of civilizations that would prevent the world from falling into "division and even confrontation."

The Chinese president made the remarks five days after U.S. President Joe Biden took over the White House, inheriting China-U.S. relations at the lowest point in decades. That has impeded bilateral cooperation on pandemic response and macro-economic coordination after four years of confrontation under former President Donald Trump.

The Chinese president said the world has been going through the "worst recession since the end of World War II."

"For the first time in history, the economies of all regions have been hit hard at the same time, with global industrial and supply chains clogged and trade and investment down in the doldrums,” Xi said. "Despite the trillions of dollars in relief packages worldwide, global recovery is rather shaky, and the outlook remains uncertain."

He said countries should "balance Covid response and economic development" and must step up macroeconomic policy coordination to "bring the world economy out of the woods as early as possible."

Xi said the world should strengthen the G-20 as the "premier forum" for global economic governance, engage in closer macroeconomic policy coordination and keep global industrial and supply chains stable and open.

The G-20 is an international forum for the governments and central bank governors from 19 countries including developed and developing countries, and the 27-member European Union.

Italy holds the G-20 presidency this year with a summit scheduled to take place in late October in Rome. The G-7, the policy coordination forum for seven advanced economies, will meet in June in Britain, U.K. Prime Minister Boris Johnson said Saturday, with Australia, India and South Korea invited as guest countries.

Xi also called on the world to "abandon ideological prejudice" of imposing a hierarchy on human civilization.

"Difference in itself is no cause for alarm,” the president said. “What does ring the alarm is arrogance, prejudice and hatred; it is the attempt to impose hierarchy on human civilization or to force one's own history, culture and social system upon others.

"The right choice is for countries to pursue peaceful coexistence based on mutual respect and on expanding common ground while shelving differences, and to promote exchanges and mutual learning," Xi said, "This is the way to add impetus to the progress of human civilization."

Xi urged the world to stick to "consultation and cooperation instead of conflict and confrontation." He also said, "Differences in history, culture and social system should not be an excuse for antagonism or confrontation, but rather an incentive for cooperation."

He warned that "to build small circles or start a new Cold War, to reject, threaten or intimidate others, to willfully impose decoupling, supply disruption or sanctions, and to create isolation or estrangement will only push the world into division and even confrontation."