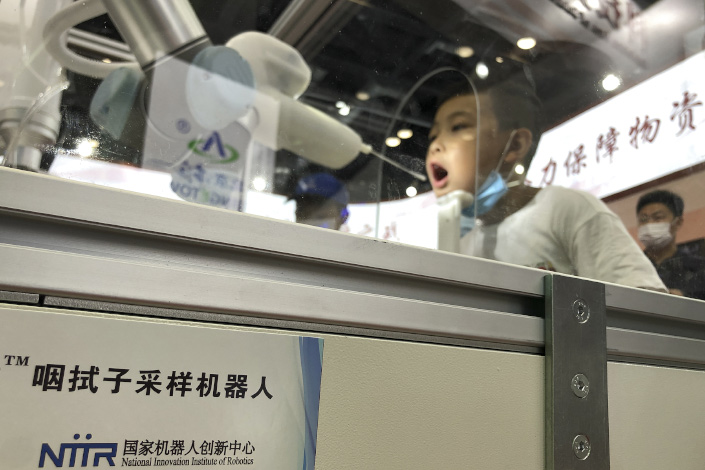 A child tries out an throat swab sampling robot at an exhibition in Beijing on Sept. 6.

Shanghai should establish a university specializing in public health as part of efforts to plug a shortage of skilled medical practitioners in this field, said a senior member of the city’s political advisory body, just as China sees a resurgence in Covid-19 outbreaks a year into the pandemic.

The proposal to bolster trained public health professionals came after the Ministry of Education published a reply to the CPPCC’s proposal to strengthen recruitment. Since the pandemic broke out a year ago, universities have rushed to set up public health schools or expand existing facilities at institutions, such as Tsinghua University, Southern University of Science and Technology and Peking Union Medical College.

“Whether or not establishing a separate public health university is the best way needs to be tested by putting it into practice,” Li Liming, director of the Peking University’s Center for Public Health and Epidemic Preparedness and Response, told Caixin.

For the future development of China’s public health education structure, comprehensive measures such as setting up higher-level institutes and accelerating the combination of multiple disciplines would result in an integrated education system, said Li.

Among China’s 137 so-called Double First Class universities, which are being groomed to be world-class institutions by 2050 as part of a government tertiary education initiative, only 22 have public health schools, according to the Ministry of Education. Most of the leading public health institutes are in Beijing and Shanghai, with fewer in central and western regions.

“There should be representative public health institutes in different regions across the country so that the overall level of public health will be improved,” Li said.

Along with new institutes, plans to support postgraduate education in public health have also been ramped up. The Ministry of Education expressed support for the graduate enrollment schemes for 83 institutions, with the aim of doubling the admittance of students in public health related majors.

The Ministry of Education and the National Health Commission have already begun related reforms, with the Chinese Center for Disease Control and Prevention and 10 universities expanding the cultivation of students in the master’s program for public health and setting up the “Medicine+MPH” double major program, which focuses on real-life applications for public health.