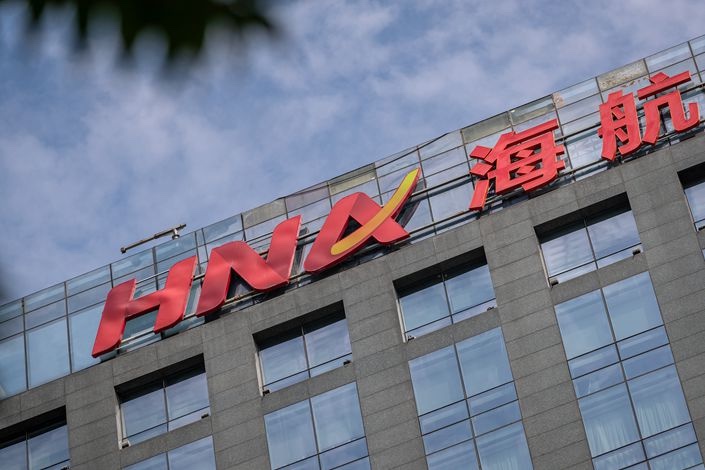 Three HNA-invested companies disclosed on Friday that creditors have filed applications to a court to force them into restructuring.

A government-appointed working team expects as many as 500 companies linked to the once high-flying HNA Group Co. Ltd. to go into bankruptcy restructuring, sources told Caixin, following news Friday that the Chinese conglomerate and three listed companies it has invested in may have to do so.

The news sheds light on the immense scope of HNA’s financial problems, even after years of trying to dig itself out from under a mountain of debt amassed during an earlier global acquisition spree that at its height boosted the conglomerate’s total assets to 1.2 trillion yuan ($171 billion).

On Friday, the three HNA-invested companies, Shanghai-listed Hainan Airlines Holding Co. Ltd. and HNA Infrastructure Investment Group Co. Ltd., and Shenzhen-listed CCOOP Group Co. Ltd., disclosed that creditors have filed applications to a court to force them into restructuring as HNA revealed the same day it also faced such an application.

The court, located in HNA’s hometown province of Hainan, had yet to inform the listed companies whether it would accept these applications, their exchange filings said.

In the filings, the companies also revealed that about 60 of their major shareholders, subsidiaries and other related parties were facing such applications as well.

Those 60 or so are just the first batch of HNA-linked companies on their way to restructuring, according to sources with knowledge of the matter. Together, their debts account for about 60% of all HNA-related debts, the sources said.

The working team sent by the Hainan provincial government last February to try to defuse HNA’s debt crisis expects that 400 to 500 HNA-linked companies, which together hold about 85% of all HNA-related debts, will eventually enter restructuring, the sources said.

The working team-led audits of HNA’s assets discovered that there are about 2,300 companies backed by the conglomerate, 90% of which are shell companies, people close to the team said.

The three listed companies also disclosed that 61.5 billion yuan in total had been embezzled by their shareholders and other related parties. In addition, the companies had provided guarantees for 46.5 billion yuan in financing in a noncompliant manner along with their subsidiaries, the filings showed.

Starting next week, China’s top securities regulator will probably be verifying HNA and its related companies’ restructuring plans and the data on the embezzlement and noncompliant guarantees, the sources said. It will assess if the plans can properly address the embezzlement and guarantee problems to protect interests of smaller shareholders.