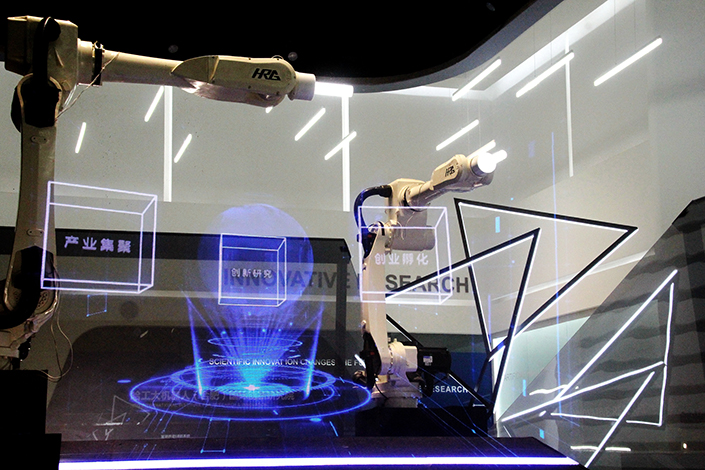 The exhibition hall of HRG International Institute (Hefei) of Research and Innovation in Hefei, East China’s Anhui province, on Oct. 30.

There have been two key meetings related to China’s technological self-sufficiency over the past few months: the Central Economic Work Conference in December and the fifth plenary session of the 19th Central Committee of the Chinese Communist Party, which took place in October.

If you paid attention to both, you are likely to get the impression that ensuring China can supply its own technology will play a crucial role in the dual-circulation development strategy (双循环) — the country’s new growth model that sees domestic circulation as the mainstay, with domestic and international circulations reinforcing each other.

More importantly, the term “import substitution” (进口替代) appeared in the document of the plenary session for the first time. The term deserves our attention.

Not unique to China

Import substitution is a strategy in which a country blocks imports of manufactured goods in an effort to boost demand for those produced domestically. It was a standard policy recommendation that the World Bank gave to developing countries in the 1950s.

Generally speaking, countries with rapidly advancing technology tend to produce lower-priced goods. That led to the policy recommendation that import substitution is the best strategy for developing countries. Under this strategy, they give up developing low-end labor-intensive industries that have a competitive advantage. Instead, they should follow the lead of developed countries and produce equipment on their own.

That is to say, import substitution was not a Chinese invention. China is not the only country that has been pursuing this strategy. India and Latin American countries are implementing it as well. Compared with others, of course, China fared better. In the first 30 years after the founding of People’s Republic of China in 1949, we built a stronger industrial base, elevating the sector to a higher level.

For instance, there was once hot debate in China over whether it should create a shipbuilding industry of its own. One side argued that buying is better than building, and chartering is even better. From an economic standpoint, chartering is undoubtedly the cheapest and smartest option. As it is today, few airlines buy aircraft. Rather, they prefer to lease them because it is cheaper. Still, the other side prevailed and China began building ships. Nowadays around 80% of the world’s vessels are made in China. The country could not have achieved this if it hadn’t insisted on a strategy of self-sufficiency.

This is one successful example of import substitution.

Since reforms began in the late 1970s, China has been accelerating its import substitution strategy. “Learning by doing” emerged as the dominant way to implement the strategy. Enterprises imported premium products that couldn’t be manufactured at home, and then gradually learned how to make them.

About a decade ago, my postdoctoral colleague Zhang Ye and I wrote a paper on China’s processing trade, which later won the Sun Yefang Prize, the top honor for economics on the Chinese mainland.

The processing trade consists of importing components from other countries and assembling them into products for export. According to the paper, the prevailing opinion at the time was that the trade was not worth pursuing because China just produced low-end products with little value added. At the height of the financial crisis in 2008, some thought China should abandon processing trade because it pushed the country’s trade surplus into the stratosphere.

The processing trade doesn’t mean making no or low value-added products. Otherwise, how has it created a huge trade surplus? Before 2014, it was processing trade that brought in most of China’s surplus, highlighting the part it plays in the country’s economic growth.

We should recognize that processing trade brings in more than just a higher trade surplus. We have learned a lot through doing it, absorbing valuable knowledge and technology, and accumulating enormous capital. With these resources, we made more advanced equipment.

Furthermore, China’s processing trade has benefited the entire world. The lower prices of Chinese products have been good for global customers. It has allowed Chinese manufacturers to forge relationships with foreign companies. Even the meetings, discussions, and tussling over new industry standards have helped improve global technology and economic links.

Thus, openness promotes import substitution. Implementing the strategy remains the best and cheapest way for China to upgrade its industries, which will also benefit other countries.

At this point, there are two major issues we need to think carefully about.

The first is the relationship between Plan A and Plan B.

China’s drive for tech self-sufficiency is due in large part to U.S. restrictions. We need to make preparations, but they should still only be a backup plan, like a spare tire. In the 1960s and 1970s, we launched the “Third-Front Movement,” an industrial development initiative based on national defense. We carried out this Plan B in a way that it made it seem like Plan A, but it came at great expense.

The Trump administration turned a number of economic issues between China and the U.S. into diplomatic disputes and weaponized those issues. We should realize that China’s economy is so big that its impact on the world is growing. Domestic economic policies not only affect our own development, but also directly impact our diplomacy. Diplomacy, in turn, will play a part. As Chairman Mao Zedong said, diplomacy aims to give a country as many friends as possible, and as few enemies as possible.

With regard to U.S.-China relations and tech self-sufficiency, we should keep a clear head, and be wary about mentioning a nationwide mechanism. Because for the international community, this is a signal that we are likely to unilaterally decouple from the rest of the world. We must never decouple from the outside world unless they do it first.

The second issue is about the relationship between the government and the market.

At present, governments at all levels are scrambling to set up funds and build up our own technology. Will it work? In my opinion, it will definitely work because of the large amounts of money the governments will surely spend. But is it the best way to achieve our goal? It is worth pondering.

One adverse effect from China’s deleveraging in 2018 and 2019 was that the state sector advanced while private firms retreated in the financial sector. It was equally true in the field of tech self-sufficiency. However, unlike the financial industry, China’s technology companies won’t likely pay a big price in the short team because such declines take time to emerge in the tech industry. It won’t be for five or 10 years that we see that country’s technology growth rate slow.

What could explain this pattern? Apart from pursuing profits, China’s financial state-owned enterprises (SOEs) have other responsibilities. SOEs have a tough time developing market-oriented tech. What’s more, their endeavors will likely come at a heavy cost, resulting in an unnecessary waste of both time and resources.

Of course, I do not want to either deny the value of state firms or the nationwide mechanism that has played a major role in building up China’s technology. A case in point is that China independently developed its satellites and its atomic and hydrogen bombs. However, we should never forget that we developed these technologies without regard for cost. In a few key areas, that’s OK, but if all levels of government and enterprises across all sectors adopted this growth-at-all-costs strategy, it would probably lead to a spectacular waste of resources.

Both China’s reform and opening-up and world history are testaments to the fact that markets should drive innovation. Innovating with decentralized market decisions is the most efficient way that human beings have found so far. It is imperative to make innovations independently in the truly crucial areas. Yet it is also essential to distinguish which should be done by the government and which should be done by the market.

All in all, China’s future growth must be more driven by innovation. Building its own tech is necessary and imperative. However, we should combine tech self-sufficiency with opening-up, rather than make it a choice between the two.

Yao Yang is a Boya Distinguished Professor and dean of Peking University’s National School of Development.

This article, edited for length and clarity, is a translation of the author’s speech at the Fifth National Development Forum, which was held by the National School of Development at the university on Dec. 20.