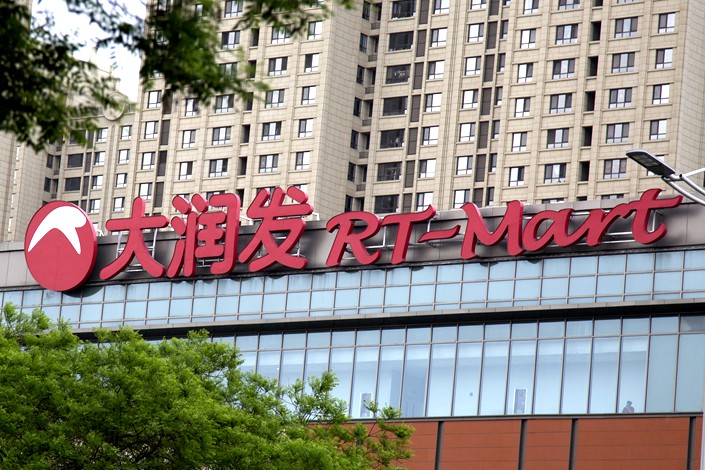 The operator of RT-Mart, Sun Art, is China’s market leader in brick-and-mortar hypermarkets, with 14.1% of the market. Photo: VCG

Alibaba-backed hypermarket operator Sun Art Retail Group Ltd. posted a 5% drop in profits during 2020 on flat revenue growth and said it aimed to bridge the gap between brick-and-mortar and online shopping by embracing the community group-buying phenomenon that has gained ground in China since the pandemic lockdown.

Sun Art is China’s market leader in brick-and-mortar hypermarkets, with 14.1% of the market, followed by rivals China Resources and Yonghui, in which Tencent owns a 5% stake, according to market research firm Euromonitor International.

Lin Xiaohai, the group’s executive director, told reporters at its annual results press conference the company is turning to focus on opening more small- to mid-sized RT-Mart retail format stores, and further tap into the community group-ordering trend within its existing supply chains.

Sun Art, which runs the China operations of international retail store chain Auchan as well as RT-Mart hypermarket destinations, operated 514 retail outlets across the country at 2020 year-end, according to its annual financial report released Monday.

The retail veteran said it aims to shy away from discounted offerings and sending out subsidies, which have been favored by many peers to undercut competitors and win buyers. Such practices have been controversial, bringing pushback from food suppliers caught up in the price war, and a rebuke from China’s top market regulator.

As China’s economy started to pick up speed from the pandemic in the second half of last year, the physical retail sector has been forced to become more competitive after domestic internet giants swooped in to capitalize on growing demand for cheap groceries delivered door-to-door.

In a statement, Sun Art attributed its lower-than-expected financial performance to “robust development of new retailing” and post-pandemic uncertainties.

Sun Art aims to stem financial losses – a common drawback to the heavily subsidized practice – by connecting customers with its current brick-and-mortar stores, which would utilize more of its storage space to meet demand for picking up online grocery orders and fulfilling community bulk orders.

The French retail chain Auchan Retail entered the Chinese market in 1999 and has operated 70 hypermarkets across the country, according to its website. It subsequently launched its digital platform Taoxianda in collaboration with Alibaba’s online marketplace Taobao.

To improve efficiencies, Sun Art has partnered up with Alibaba’s logistics subsidiary Cainiao to offer community group orders at more than one hundred physical stores in over 36 cities as of December. It also enabled bundled purchasing in a further 125 cities through Sun Art’s self-managed group-buying franchise, Feiniu Pintuan.

It is looking to open another 30 to 50 RT-Mart supermarkets nationwide this year by expanding its footprint in less developed cities, it said.

Sun Art is essential to Alibaba’s blueprint to consolidate its dominance in the nation’s converging online and offline grocery space. Apart from transforming traditional hypermarkets, Alibaba has also opened its own Freshippo grocery retail chain, which now operates 200 stores across China.

Alibaba’s grocery delivery platform Taoxianda enjoyed an 80% surge in online retail sales during 2020 on the back of order growth of 60%.

Alibaba Group Holding Ltd took ownership of 72% shares in Sun Art through a $3.6 billion deal in October. Shortly after the deal, three senior managers from Alibaba entered the board of the subsidiary, including Lin Xiaohai, the vice president of Alibaba and executive director in Sun Art, Alibaba’s vice president Li Yonghe and chief financial officer Xu Hong as Sun Art’s nonexecutive director.

Hypermarkets are retail stores that sell a mix of supermarket goods like groceries and department-store style merchandise such as apparel, furniture and appliances. China’s hypermarket sector was valued at $92.88 billion in 2019 and HSBC expects it to more than double in size by 2022.