Update: Alibaba Sales Boom on Back of New Grocery Acquisition 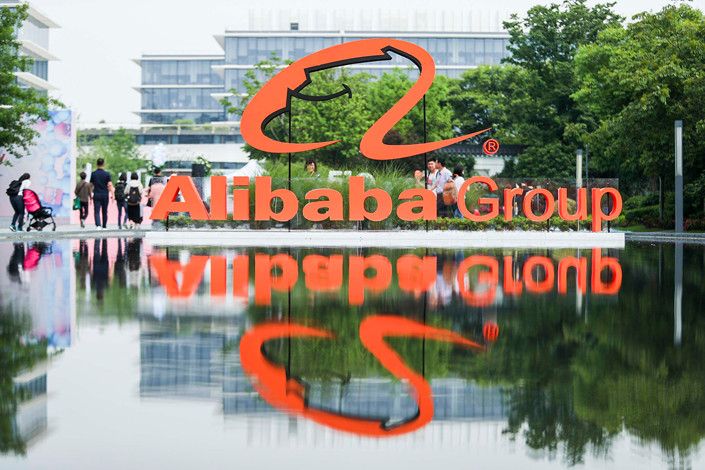 Alibaba’s cloud division reported its first positive adjusted earnings before interest, tax and amortization, a milestone for the growing business.

Alibaba Group Holding Ltd.’s fourth-quarter sales beat expectations on strong contributions from a recently acquired grocery chain and strong growth for other new businesses, offering a boost for a company grappling with a regulatory crackdown on Jack Ma’s tech empire.

The latest report included results for Sun Art, a major supermarket operator that Alibaba took majority control of last October. Without the Sun Art contribution, Alibaba’s revenue would have risen by a more modest 27% for the December quarter, representing a 3 percentage point decline from the previous quarter. The big profit increase was also fueled by a one-time jump in the value of Alibaba’s investments. Excluding those gains, the company would have reported a more modest profit increase of 27% from a year earlier.

Investors in New York gave the report a tepid response, bidding down Alibaba shares by 3.85% after its release. The company’s Hong Kong-listed shares mirrored that decline, down by the same amount late in the Wednesday morning session.

The stronger-than-expected earnings may also be overshadowed by an ongoing antitrust probe that has already wiped more than $130 billion off the e-commerce giant’s value since its October record. Uncertainty began in November when regulators torpedoed the initial public offering of Alibaba fintech affiliate Ant Group Co. Ltd., then launched an investigation into the online retailer. Alibaba shares have dropped 13% since the aborted Ant debut, the worst performance in Hong Kong’s benchmark Hang Seng Index.

“The business performance is strong, and many feel the shares are undervalued compared to the roadmap and trajectory of some of their businesses,” Andy Halliwell, an analyst at technology consultancy Publicis Sapient, said in a research note after the earnings result. “However, if the Chinese government is looking to crack down on outspoken entrepreneurs and take a more conservative line with their larger tech businesses, then this will dent investors’ confidence in the brand and may create an opening for others to exploit.”

Alibaba’s profitability has been eroding in recent years in part due to its increasing use of direct sales models, including that used by Sun Art, which generally carry lower profit margins than its older business model of acting as a middleman linking merchants and consumers. Partly as a result of that shift, Alibaba’s core EBITDA margin fell to 34% in the fourth quarter from 41% a year earlier.

The Sun Art acquisition sharply boosted Alibaba’s total headcount to about 252,000 by the end of last year, more than double 122,400 at the end of the third quarter.

Alibaba is actively communicating with antitrust regulators on complying with their requirements and established a special task force to conduct internal reviews, the company said in the earnings release.

The company’s shares recouped some of their losses after Ma resurfaced in public during a livestreamed video conference last month in an apparent signal that worst-case scenarios — such as a government-led takeover or breakup of his companies — are probably off the table. Few expect Beijing to entirely back off its campaign to more tightly regulate Ant, Alibaba and the rest of China’s high-tech giants. But the stock’s partial recovery suggests investors are beginning to price out the risk of a crackdown that would put the country’s richest entrepreneurs and most innovative companies in serious jeopardy.

Alibaba’s cloud division reported its first positive adjusted earnings before interest, tax and amortization, a milestone for the growing business. Revenue for the segment rose 50%, driven by customers in the internet, retail and public sectors. Cainiao, the logistics unit, was also operating cash flow-positive, the company said.

Annual active consumers grew to 779 million in the December quarter, driving a 38% increase in the core commerce business. Alibaba booked $75 billion of sales over its annual Double 11 promotion around Nov. 11, easily beating its 2019 haul after the company began promotions early and added services for the first time. The increased spending came even as overall retail sales fell 3.9% last year, with consumption lagging industrial activity in the broader economic recovery.

Investors are questioning whether Alibaba can sustain that growth as Beijing steps up oversight of Chinese tech giants, particularly in online commerce. Ma’s company, once the standard-bearer for China’s fast-rising private enterprises and booming internet sphere, now faces penalties of as much as 10% of revenue, or $7.8 billion, if it’s found to have violated rules against practices like forced exclusivity arrangements with merchants known as “Pick One of Two,” predatory pricing or algorithms favoring new users.

Any regulations requiring Alibaba to implement a full halt to forced exclusivity policies may hit sales of its Tmall by close to a tenth in 2021 before sales return to 18%–20% annual growth in 2022 and beyond, according to San Francisco-based Octahedron Capital Management LP. As of now, fewer than 10% of the top-selling brands are exclusive, they estimated.

The regulations may also hamper the company’s ability to fend off rivals from JD.com Inc. to Pinduoduo Inc., whose 730 million annual consumers are closing in on Alibaba’s user base. Meanwhile, short-video platforms like ByteDance Ltd. and Tencent-backed Kuaishou Technology are also tapping livestreaming as a sales outlet to wrest a larger e-commerce share. Beijing-based ByteDance revealed its Double 11 takings for the first time in 2020, with Douyin, the Chinese version of global sensation TikTok, booking 18.7 billion yuan in gross merchandise value.

Ant contributed 4.8 billion yuan to Alibaba’s profit in the quarter, indicating that the company earned 14.5 billion yuan in the three months ended September as its earnings lag one quarter behind Alibaba’s.

As part of the crackdown, authorities told Ant to “rectify” its lending, insurance and wealth management services. With the affiliate still in the process of developing the rectification plan, Alibaba said Tuesday it’s unable to make a “complete and fair assessment” of the impact on its business.