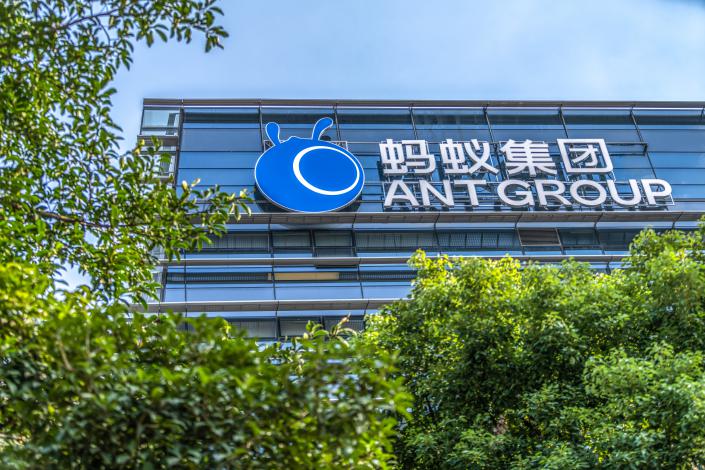 Ant Group Co. Ltd. has dominated China’s financial headlines over the past few months, first for its potentially record-breaking IPO — and then for the listing’s shock suspension in the wake of tightened fintech regulation.

Its billionaire founder Jack Ma hasn’t been seen in public since the authorities pulled the plug on the blockbuster IPO in early November, a watershed event both for the fintech titan and perhaps the whole industry.

Ant Group now has to overhaul its financial business, as the government lays out stricter regulatory requirements to control financial risks and protect consumers’ interests.

China’s central bank said Friday that regulators are in close contact with a special Ant Group team that’s drafting plans and a timetable to rectify its operations.

The company’s future is hanging in the balance. Below are eight things to know about what Ant Group has been through and the challenges it faces ahead.

1. What’s behind the IPO suspension?

Many have argued that it was predictable that tough regulation was going to come at some point, but that Ant Group didn’t know when.

The suspension came on the heels of Ma’s Oct. 24 speech at a Shanghai summit where he criticized regulators for stifling innovation and being too risk-averse, putting him on a collision course with the authorities. At the same summit, Chinese Vice President Wang Qishan said that security should always come first in the financial industry.

One thing worth noting is that before that speech, watchdogs had already made efforts to regulate the financial arms of tech giants amid concerns over the potential risks such entities could pose. One example is that in December 2017, the central bank set up a pilot program to simulate a supervisory system for financial holding companies and included Ant Group and four other companies in the trial. The next year, the central bank said it would establish such a regulatory system as soon as possible, which eventually debuted in September 2020.

But overall, regulators had a relatively light touch. Many believe that was because they wanted to protect domestic champions in the highly competitive fintech sector. That allowed Ant Group, the fintech affiliate of e-commerce behemoth Alibaba Group Holding Ltd., to grow rapidly as it sidestepped some of the more stringent requirements faced by traditional financial institutions. Ma’s speech, however, may have been the straw that broke the camel’s back in terms of regulatory permissiveness toward “too big to fail” fintech giants.

Yes, though it is likely that Ant Group didn’t expect some of the regulations to come so soon or to be so tough. Ant Group had warned of the risk that new regulations could increase its compliance costs and hamper its business growth in the IPO prospectus (link in Chinese).

On Nov. 2, the central bank and the top banking watchdog revealed draft rules on online microlending, hitting a major revenue stream for Ant Group. The very next day, the company’s IPO was suspended.

Some analysts have speculated that Ma knew the draft online lending rules were coming and that the criticisms in his speech were aimed at them. But sources close to regulators have denied this was the case. They said the publication of the draft was a reaction to Ma’s high-profile outburst.

The regulatory storm has since expanded to the whole tech industry and escalated to the country’s top leadership. In December, the Politburo — the ruling Communist Party’s top decision-making body — vowed to rein in “disorderly capital expansion.”

3. What exactly is Ant’s problem?

Ant Group’s financial business is highly leveraged, which poses a systemic risk. And it’s not subject to the regulations required for traditional financial institutions. Ant Group’s overall leverage has surpassed 60 times, meaning that the loans it facilitates equal to more than 60 times its net assets, according to the estimate by microlending expert Ji Shaofeng.

Nearly 40% of its revenue came from its online lending business in the first half of 2020, and there was a massive 2.15 trillion yuan ($332 billion) of credit balance facilitated by its platform at the end of June. But for that amount, Ant Group only contributed 2%, and the remaining 98% came from its partners or asset-backed securities.

In a move to contain such a risk, the draft online lending rules require microlenders, including those owned by Ant Group, to fund at least 30% of any joint loan with other institutions, which significantly challenges the company’s profitability.

In addition, the dominance of Ant Group and its Alipay in online lending and payment has also sparked monopoly concerns, and a nationwide antitrust regulatory storm was soon kicked off.

4. So what does Ant Group have to do now?

Ant Group has begun to enclose all its financial operations in a wholly owned subsidiary. This is to comply with new rules that took effect on Nov. 1 for financial holding companies — which control financial institutions that belong to at least two different sectors.

In late December, four financial watchdogs held talks with Ant Group executives during which they blasted the company for poor corporate governance, disdain for regulators’ compliance requirements and engagement in regulatory arbitrage. The watchdogs ordered Ant Group return to its origin as a payment service provider and overhaul its lending, insurance and wealth management services.

In response, Ant Group said it would comply and establish a working group to fulfill regulatory requirements.

The flurry of talks and regulations in December looked daunting, but people close to the regulators interpreted that regulatory uncertainties surrounding Ant Group and Alibaba have been largely eliminated. Judging from the results, these regulatory measures were on the rational side and largely expected by the market.

5. Will Ant Group still attempt an IPO? When?

It’s widely assumed that Ant Group will eventually go for an IPO, but judging from the changes it’s required to make to its business now, we don’t anticipate a listing within the next six months.

Probably, now that it’s treated more like a traditional financial institution. Ant Group’s offering price to earnings ratio — a common measure to gauge a company’s valuation — was about 154, which was 22 times the average for banking stocks, according to a research note by Chuancai Securities Co. Ltd.

Meanwhile, Ant Group’s business expansion will likely be slowed under stricter leverage and capital reserve requirements, which will also dent its valuation.

Ant Group has brought in a group of investors with prestigious names in three rounds of financing from 2015 to 2018. Among them are some of the world’s biggest sovereign wealth funds, such as Singapore’s GIC Pte. Ltd. and Temasek Holdings Pte. Ltd. Other well-known global investors include BlackRock Inc., Carlyle Group Inc., Fidelity Investments, Sequoia Capital and Warburg Pincus LLC.

The stepped-up regulation has also dealt a heavy blow to Ant Group’s peers, especially the financial arms of internet titan Tencent Holdings Ltd. and e-commerce giant JD.com Inc., impacting their business growth potential and valuation, as well as the investors behind them.

The IPO of Jingdong Digits Technology Holding Co. Ltd. (JD Digits), the fintech unit of JD.com, which is still pending, will be affected. JD.com recently announced it will merge its cloud and AI business into JD Digits. The move will likely dilute the role of the financial business in JD Digits’ bottom line, which may help it sidestep some tougher new rules in the future.