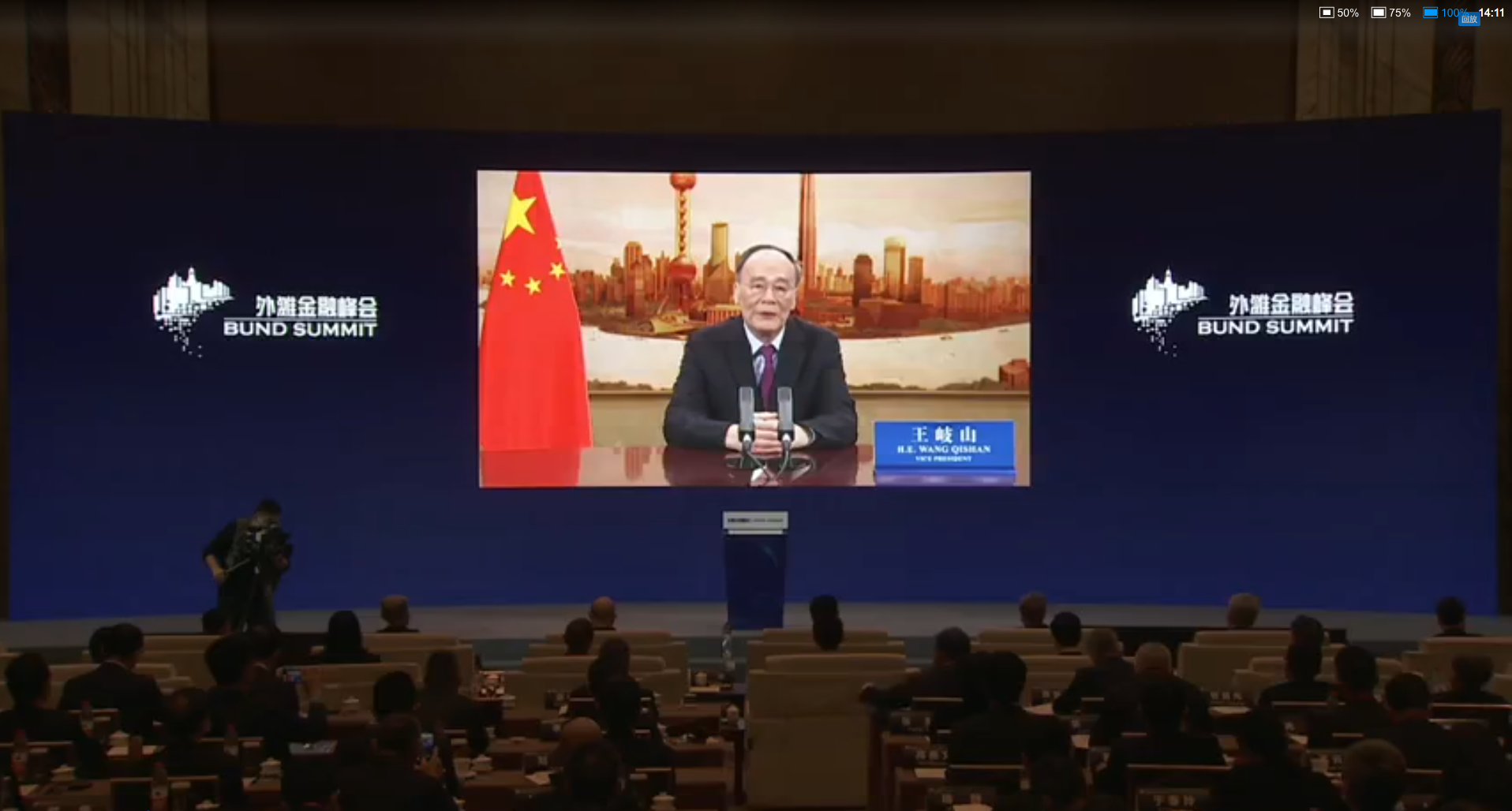 Vice President Wang Qishan's pre-recorded speech is played to attendees at the Bund Summit in Shanghai on Oct. 24.

The industry should serve the real economy and focus on preventing financial risks, Wang said in a pre-recorded speech presented to the Bund Summit in Shanghai.

Wang made his remarks as China pushes ahead with its efforts to prevent systemic risks in the financial sector that have been created by high debt levels, many companies’ immature risk control, and underregulation of emerging areas such as internet finance.

He said that the finance industry should pay close attention to companies’ operations and support the economy’s key areas and weak links, adding that of the industry’s three key principles — security, liquidity and effectiveness — the most important is always security.

Meanwhile, it is necessary to strengthen the industry’s capabilities to ensure that it can withstand challenges posed by market competition amid opening-up, changes of economic cycles and external impact, he said.

In recent years, as new financial technologies have been broadly applied, new businesses have emerged which have brought convenience and high-efficiency but also magnified risks. Striking a balance between innovation, opening-up and regulatory capacity is essential, he said.

Regarding China’s economy, Wang said that it has entered a “high-quality development stage” and that the country will further pursue its strategy of “dual circulation” (双循环) with a focus on domestic circulation, he said.

The theme of dual circulation was first mentioned by President Xi Jinping in May. Although no specific details have been released, broadly speaking, the strategy involves making the economy more reliant on “internal circulation” — the domestic cycle of production, distribution and consumption — for its development, while being supported by “external circulation,” which relates to international trade and investment and China’s links with the rest of the world.

Wang said that domestic demand has made a greater contribution to economic growth in recent years as international momentum weakened. China should further push forward supply-side structural reform and continue to expand domestic demand, he suggested.

China will also work to clear deep-rooted institutional obstacles to have the market play its role in the allocation of resources, Wang said. That will help foster a more international and convenient business environment that adheres more to the rule of law, he said.

China’s top leaders will discuss their proposals for the next five-year plan, covering 2021 to 2025, at a key meeting from Monday to Thursday, with Xi’s dual circulation strategy likely to take center stage to help the economy overcome medium- and long-term challenges.