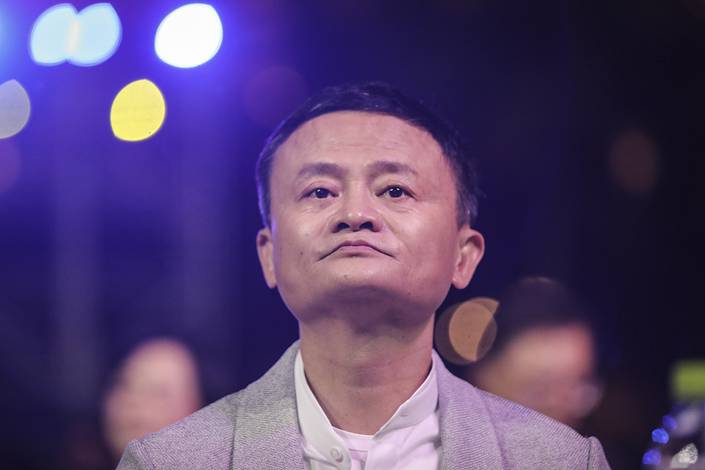 China’s most famous businessman, billionaire Jack Ma, surfaced at an online conference Wednesday, months after his disappearance from the public eye fueled speculation that he may have run afoul of the law.

The outspoken founder of Alibaba Group Holding Ltd. spoke at an annual online event promoting the achievements of rural teachers Wednesday, according to video of the event seen by Caixin. Ma himself started out as an English teacher before going on to found Alibaba, which is now one of the world’s most valuable companies with a market value of nearly $700 billion.

The news of Ma’s reappearance sparked a rally in the company’s Hong Kong-listed shares, which rose nearly 9% in Wednesday trade.

Sources close to the company told Caixin that the video was authentic and that the conversation was originally broadcast live.

It wasn’t clear where Ma was when he made the 48-second video, in which he appears seated with his hands clasped in front of him. The video also contained brief footage of Ma touring an elementary school in Tonglu county, which is part of the bigger city of Hangzhou where Alibaba is based, dated Jan. 10.

“Jack Ma participated in the online ceremony of the annual Rural Teacher Initiative event on January 20,” the company said in a brief statement, without elaborating.

Ma disappeared from view after publicly chastising top regulatory officials in October. The 56-year-old executive is known for his outspokenness, and similarly blunt remarks two years ago led to a public uproar when Ma spoke fondly of the slavish culture of working 12-hour days, six days a week, known as “996,” at many Chinese tech companies.

This time some had speculated that Ma may have gone too far by openly criticizing government regulators trying to rein in the freewheeling ways of Alibaba’s Ant Financial affiliate and other privately backed fintech companies. Ma’s criticism had come just days before the abrupt suspension of Ant’s estimated $34.5 billion blockbuster IPO in Shanghai and Hong Kong that was potentially set to become the world’s largest ever new listing.

As of early December, Ma was reportedly “advised by the government” to stay in the country, Bloomberg reported late last month, citing an unnamed source familiar with the matter. Some speculated that Ma might even be under arrest.

Following his latest outspokenness, Ma and other top Ant Group executives were called in for a dressing down on Nov. 2. Draft regulations were launched to rein in the growing power of online finance platforms, which were often criticized for being subject to far less oversight than traditional financial institutions like banks and insurance companies.

Although Ma has no official position at either Ant Group or Alibaba, he is the “ultimate controller” of the fintech company, according to the company’s IPO prospectus, and still had a 4.8% stake in the e-commerce giant as of July 2. According to Forbes’ Real-Time Billionaires List, Ma is currently the world’s 19th wealthiest person with a fortune estimated at $60.7 billion.

Following his controversial remarks, Ant Group Chairman Eric Jing last month heaped praise on China’s financial watchdogs in his first public speech after the IPO was halted. Jing said the firm was working closely with regulators and doing its best to deal with the aftermath of the listing suspension, and said regulation would guard against the risks that arise from rapidly growing fintech companies like his own.

Most recently, regulators have launched a separate antitrust probe into Alibaba, following years of criticism that China’s tech titans have been allowed to grow too big and too powerful.