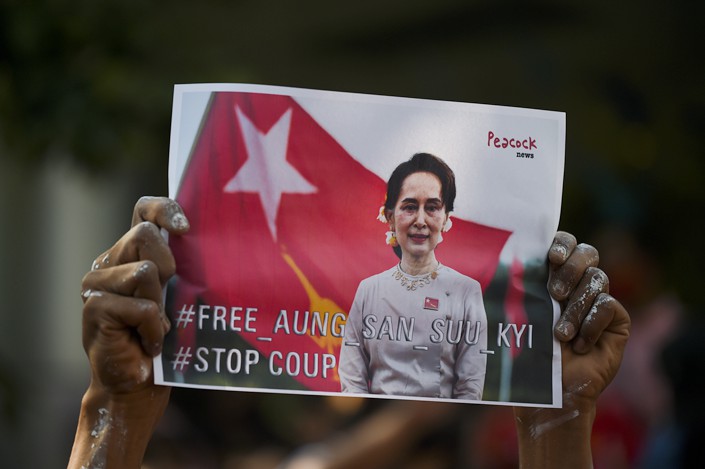 Michael: Myanmar demonstrators hold up portraits of Aung San Suu Kyi during a protest Monday against a military coup at the Myanmar Embassy in Bangkok, Thailand. Photo: VCG

The military in Myanmar took over the country Monday, declaring a year-long state of emergency. It detained de facto head of state Aung San Suu Kyi and other leaders of her party, the National League for Democracy (NLD), which won a November general election by a landslide.

Military chief Min Aung Hlaing initiated the coup and has since been appointed Myanmar’s leader for the next year. The military, which backed the opposition in the election, said the country will have a new election after the emergency ends, and after that it will hand over the power to the winning party.

Myanmar’s political transition, which began in 2010, suffered a major setback after the military overturned the internationally recognized results of the 2020 general election, making the ruling NLD unable to carry out its mandate.

The coup also put an awkward and hasty end to a power-sharing arrangement between the military and the NLD since 2015.

The Southeast Asian country, ruled by a military junta since 1962, was on a path of political transformation since 2011. After the 2010 election, Thein Sein, a former military general, was elected president. Following a by-election in 2012, Suu Kyi and NLD members joined the parliament for the first time and became the legal opposition party. The NLD won the first democratic election in November 2015 by a landslide and took power in the spring of 2016 on the back of military recognition of the election results.

Under the pressure of long-term international sanctions and strong domestic calls for a transition, the military finally gave up full power. Instead, it teamed up with Suu Kyi, who has won international sympathy and long led opposition political movements, to try a path of joint rule by the military and elected political parties.

Under Myanmar’s 2008 constitution, although the elected government has executive power, three key ministries—interior, defense and border affairs—remain under military control. The military gets an unelected 25% of parliamentary seats, ensuring veto power over any constitutional change.

However, after five years of “two-headed” governance, the country failed to make significant progress in resolving conflicts between the main ethnic groups and minorities or a large number of social and economic problems. The NLD’s road map to further political transformation also threatened the military’s interests, and the tacit political understanding and balance between the two powers collapsed.

In February 2019, the NLD proposed several constitutional amendments, aiming to reduce the military’s role in government, remove a provision that effectively prevents Suu Kyi from becoming president and lowering the parliamentary vote requirement for constitutional changes. All of the changes threatened the military’s interests. In a series of votes in March 2020, virtually all of the NLD’s proposed amendments received majority support but failed to gain the necessary 75% approval as the military bloc dissented.

When the NLD came to power in early 2016, it made three major political promises—national reconciliation, real democracy and socio-economic development. In the past four years, the government has made little progress in promoting national reconciliation and social and economic development, and there has been no real action on achieving real democracy.

The NLD’s overwhelming victory in the November election also points to a shift in the wind that the military finds hard to accept: If the current trend continues, it seems only a matter of time before the military and its wings are forced into a gradual retreat from Myanmar’s politics.

After the November election, the military and the opposition USDP, which it backs, raised allegations of electoral fraud, claims repeatedly dismissed by the election commission. The remaining tacit links between the NLD and the military were exhausted.

The military claimed that more than 25% of votes might have been fraudulent based on a review of the voters’ list released by the election commission showing that information on as many as 10 million voters contained errors, such as the same names appearing multiple times and different names having the same identification numbers.

The election commission acknowledged errors but said they didn’t mean electoral fraud. The commission blamed the limited administrative capacity of the Myanmar government and the lack of popularization of electronic information.

After each voter cast a ballot, election officials at polling stations would mark the voter’s little finger with a special ink. The color of the ink would last a week to prevent repeated voting by the same person. Amid the Covid-19 pandemic, election workers also went to the homes of elderly people who couldn’t get to the polls and collected their votes. Some of those voters were not marked with the special ink.

The military asked that the election commission investigate the election and that seating of the new parliament be postponed. The NLD rejected those requests.

The sudden coup led many observers to conclude that Myanmar’s political transition would come to an abrupt end. If Suu Kyi, the daughter of the founder of modern Myanmar’s army and a veteran political leader who insists on nonviolent reforms after 21 years of house arrest, cannot lead Myanmar forward, then who else could? This is why many are pessimistic about the prospects for Myanmar’s transition.

Since the NLD came into power in 2016, lack of governing experience and lack of cooperation between pro-military officials and NLD members resulted in the government delivering a disappointing record—slowing economic growth, continuing international pressure and the failure of epidemic prevention to live up to expectations.

Myanmar’s GDP growth fell from 8% in fiscal 2014–15 to 6.5% in 2018–19. The International Monetary Fund in April lowered its economic growth forecast for the country from 6.4% to 1.8%, the lowest growth since 2011 when the military handed over power to then President Thein Sein’s “quasi-elected” government.

The international image of Suu Kyi and the elected government have also been hurt by the government’s hardline handling of the Rohingya people, one of Myanmar's many ethnic minorities. In 2017, after a series of attacks on military and police outposts by a group of Rohingya militants, the military launched a brutal crackdown on Rohingya villages.

In November, the West African nation of Gambia filed a lawsuit with the United Nations court accusing Myanmar’s security forces of committing genocide on the Rohingya people with the intention of trying to destroy the Rohingya as a group.

Even though the elected government has little power to make decisions on the Rohingya issue. Suu Kyi defended the country’s actions in December at the International Court of Justice in the Netherlands. She argued that her country’s security forces had simply responded to coordinated attacks by Rohingya insurgents and that it could not be ruled out that the military had used disproportionate force.

“If war crimes have been committed, they will be prosecuted within our military justice system,” she said in court.

She argued that “it would not be helpful” for international legal order if the impression takes hold that “only resource-rich countries can conduct adequate domestic investigations and prosecutions.”

A careful review of Suu Kyi’s public statements over the years shows that while she and the military have diverging views on a political road map, the two parties are not as far apart as expected by the West on minorities issues.

Even though Suu Kyi’s defense of Myanmar’s military damaged her international image, chilled her relations with the West and prompted calls for revoking her Nobel Peace Prize, some said her posture was intended to build trust between the military and the elected government or to win more room for maneuver.

Her strong stance on the Rohingya issue and unyielding resistance to Western pressure was also considered a factor that helped the NLD to its sweeping victory in the 2020 election.

The rise of Suu Kyi’s personal image despite the NLD’s disappointing performance in the past five years made the military realize that its legitimacy in the country’s political arena was at a tipping point.

The consensus among experts is that while the public largely stands on the side of the NLD, it has no power to make strong countermoves. It’s likely the military will delay handing over power as long as possible while trying to advance policies to stimulate the economy and improve people’s livelihoods to generate greater approval for the military-backed USDP. When the situation in the future favors the military, it will hold a general election. Meanwhile, Myanmar is likely to face renewed international sanctions.

The military coup once again confirms the Myanmar people’s fear of a military coup, said Wu Qingxiang, assistant research fellow at Xiamen University’s Nanyang Research Institute. Even if the military promises to hold elections in a year or two, the chances that the USDP will defeat the NLD in a truly fair vote are low, he said. The future situation in Myanmar will largely be determined by the subsequent reaction of the international community and the reaction of the Myanmar people to the coup, he said.

Lu Wen is a world news reporter at Caixin Media