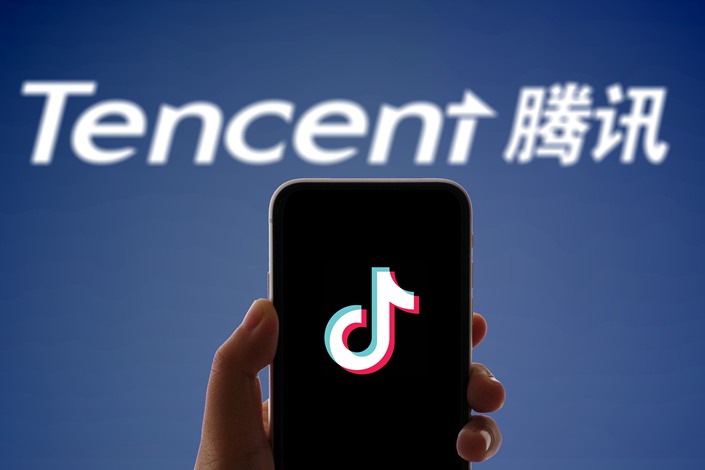 ByteDance filed suit Tuesday in Beijing alleging that Tencent violated Chinese antitrust laws by blocking access on WeChat and QQ to content from Douyin. The company asked the court to order that Tencent cease the actions and pay a modest 90 million yuan ($14 million) in compensation.

The two tech giants are fierce rivals, and their billionaire founders — Zhang Yiming at ByteDance and Tencent’s Pony Ma — have previously traded barbs. As recently as January, ByteDance senior executives publicly accused the larger company of blocking its offerings, including Douyin and work collaboration and productivity app Feishu, on WeChat.

“We believe that competition is better for consumers and promotes innovation,” a ByteDance spokesperson said. “We have filed this lawsuit to protect our rights and those of our users.”

Tencent responded by saying that ByteDance’s accusation was “malicious framing” and pledged to countersue.

WeChat, which has more than 1 billion users, has erected a so-called walled garden that controls the content and services its users can interact with. ByteDance previously sued Tencent for blocking its content, but TikTok’s owner said this is the first time the company is doing so on anti-monopoly grounds.

ByteDance has been eating away at Tencent’s lead in areas like social media and gaming in recent years. WeChat, for its part, launched a direct assault on Douyin’s turf by introducing a short-video feed within its super-app. The WeChat Channels feature garnered more than 200 million daily active users in fewer than six months since launching, and the app’s founder Allen Zhang said in January that videos will be the king of social media for the next decade.

The war of words and legal wrangling between Tencent and Douyin dates to at least March 2018, when users of Tencent’s WeChat and its QQ social networking offshoot QZone reported issues posting links to videos on rival platform Douyin.

After a minute or so, such links would only be visible to them, and not to other users, they said. Tencent acknowledged the issue but denied it was intentional.

A month later, WeChat and QQ began rejecting links to short video content from ByteDance services Douyin, Xigua Video and news app Jinri Toutiao. Today, users have to jump through hoops in order to share Douyin videos, downloading the video locally before uploading it to their desired Tencent platform.

The dispute came to a head on Tuesday when Douyin filed suit against Tencent in Beijing’s Intellectual Property Court, claiming Tencent was abusing its market dominance and contravening Article 17 of China’s Anti-Monopoly Law.

It is not the first time Douyin has taken Tencent to court, but the escalation among the major players comes amid changing political winds for China’s internet firms, as regulators bring the fight against perceived unfair competition to a sector which long benefited from a hands-off approach.

Douyin said for WeChat and QQ’s hundreds of millions of combined users, there was little in the way of an alternative on the market and no effective constraint on Tencent’s power.

Tencent denied it had engaged in anti-competitive behavior in a statement Tuesday night. “Tencent and its products abide by the philosophy of fair competition and open cooperation in providing services to users and third parties,” it said.

“ByteDance’s accusations are pure falsehood and malicious framing,” it said, adding that it had not received materials related to the suit. Tencent said it would countersue.

The Shenzhen-based tech giant also accused ByteDance of itself engaging in unfair competition to obtain the personal data of WeChat users, violating the rules of the platform.

“ByteDance and associated companies still engage in many illegal activities that infringe on the (WeChat) platform ecosystem and the rights of its users,” the firm alleged.

Douyin responded soon after, saying Tencent’s accusation referred to the use of avatars and nicknames of WeChat users in products such as Douyin. “Tencent believes that user data such as the user’s avatar, nickname, and so on are Tencent’s ‘commercial resources.’ Even if the user’s authorization is obtained, unless Tencent agrees, (it thinks) the use of the above-mentioned data by others is ‘illegal,’” it said.

Users should have the rights to their own data, and they should not be Tencent’s ‘private property,’ the firm argued.

In March, WeChat started blocking links from ByteDance’s enterprise messaging app Feishu on its platform, as competition in China’s booming collaboration software industry intensified amid the pandemic’s “work from home” phenomenon. The rival has a workplace app similar to Feishu called WeChat Work.

Feishu said users had complained they could not access the app’s links shared on WeChat, and were told they contained “misleading” content. Instead, Feishu users were forced to copy the links and open them in a separate browser.

A Tencent source told Caixin at the time that the company’s move to curb Feishu stemmed from its own policy introduced in October, which barred links from third-party websites or apps that redirects users, misleads them or compels them to download or share content.