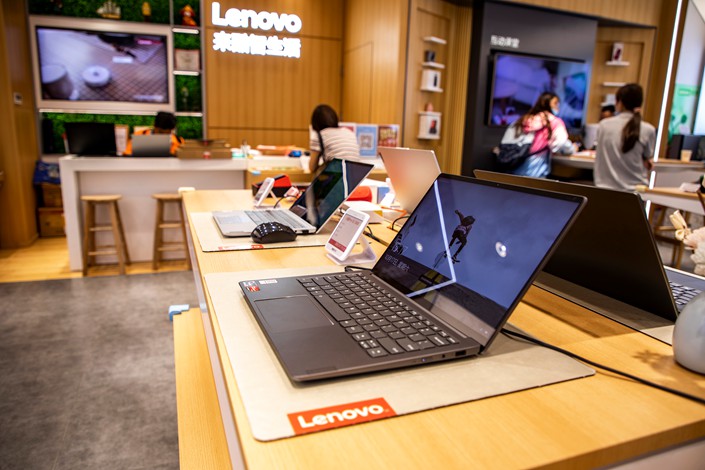 Lenovo’s stock has now more than doubled since October, as the entire PC sector enjoys a renaissance during the pandemic after years of stagnation. Photo: IC Photo

Leading PC maker Lenovo Group Ltd. on Wednesday reported record profits and revenue for its latest quarter, lifted by surging demand for its core products from a new generation of people working, studying and playing from home during the global pandemic.

The strong results sparked a rally by Lenovo shares, pushing them to a nearly six-year high as they rose more than 4% in afternoon trading in Hong Kong. The stock has now more than doubled since last October, as the entire PC sector enjoys a renaissance during the pandemic after years of stagnation.

Lenovo’s revenue rose 22% during its quarter through Dec. 31 to $17.2 billion, according to its latest report released during the midday break of the Wednesday trading day in Hong Kong. Its profit rose 53% to $395 million.

“During the three months ended Dec. 31, 2020, Lenovo delivered many new performance records, including all-time high revenue and profit,” the company said in a statement. “The strong performance has been fueled by Lenovo’s robust growth across business groups as well as structural changes in lifestyle and work habits since the onset of the Covid-19 pandemic. The PC and Smart Device and Data Center Group achieved record revenue while Mobile Business Group grew its top-line by double-digits.”

Revenue for the company’s core PC and smart devices group grew 27% to $14 billion, accounting for more than 80% of its total. The company said strong work-from-home demand helped to drive 31% revenue growth for its thin and light notebook PC sales, while its PC segment targeted at gamers grew by an even stronger 61%. Shipments of its Chromebooks, based on the Google Chrome operating system, nearly quadrupled, with the company crediting the rise to a boom in demand for online learning.

The global PC market surged during last year’s fourth quarter, with worldwide PC shipments up 26.1% year-on-year to 91.6 million units, according to market research firm IDC. Lenovo outpaced the global rate with 29% growth during the quarter, helping to consolidate its place as the world’s biggest PC brand with just over a quarter of the market. American brands HP Inc., Dell Inc. and Apple Inc. came in second, third and fourth, respectively.

Outside PCs, Lenovo’s mobile business group, which includes smartphones and has long been an Achilles heel for the company, also saw revenue grow by a modest 10% to $1.5 billion. The group also returned to profitability during the quarter, with a pre-tax profit of $10 million.

Lenovo also announced a broad restructuring that will group its products and services into three main areas. It added its longtime President and COO Gianfranco Lanci will retire in September.

The first group, intelligent devices, will be centered on devices and supporting software and services involved with the internet of things (IoT) that envisions a future where electronic gadgets “talk” among themselves and with their owners over the web to perform their functions more effectively. That group will be led by Luca Rossi, current head of the company’s PC and smart device group for Latin America, as well as Europe, the Middle East and Africa.

The second group will focus on infrastructure solutions, which was previously called Lenovo’s data center group, and will continue to be led globally by Kirk Skaugen. The third group will focus on smart verticals and services and will be headed by Ken Wong, who currently oversees the company’s PC and smart device group for the Asia region.

Lenovo’s recent surge reverses years of stagnation as the global PC market sputtered amid a broader move to more mobile devices like smartphones. Lenovo had previously staked its future on a move into such devices, including its 2014 purchase of the faded Motorola brand, but failed to execute well in that highly competitive space.

More recently, the company has also generated excitement with its announcement last month of a plan to list its shares on the Nasdaq-style STAR Market in Shanghai through the issue of China Depositary Receipts. Despite being based in Beijing and counting the mainland as one of its top markets, Lenovo’s shares have traded in Hong Kong since the 1990s. They were prevented from listing on the Chinese mainland until recently due to its status as an overseas domiciled company.