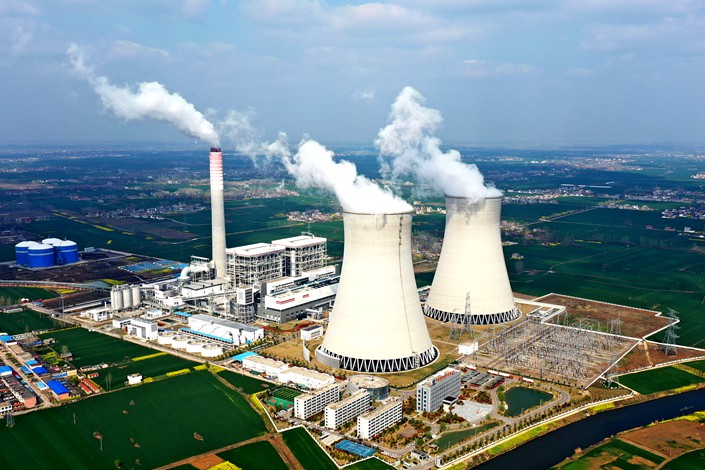 China has, for the first time, asked domestic companies to shoulder the responsibility for controlling the country’s greenhouse gas emissions by buying and selling emission quotas on a unified national carbon market.

The sheer scale of the problem could create the world’s largest carbon trading market, but big structural factors stand in the way.

Systemic issues in China’s power generation industry are likely to prevent companies from effectively participating in the national carbon market: the pressure that the added cost of carbon will put on the far-from-market-driven industry and the lack of an absolute cap on the amount of carbon that can be emitted under the program.

Under the cycle, which will at first be limited to domestic thermal power generators, 2,225 companies in the industry have until Dec. 31 to meet the requirements set by the government for carbon emissions.

Considering the amount of carbon dioxide produced by this industry alone in China, the market has the potential to make a big impact. In China, power generation emits more carbon dioxide than any other industry. It produced 4.14 billion tons in 2018, accounting for 43.4% of the nationwide total.

By itself, the industry produces enough emissions to create the largest carbon trading market in the world.

Although construction of the national carbon trading market is still in its initial stages, much is riding on its success. China has set ambitious goals for limiting its carbon emissions. At the 75th session of the U.N. General Assembly on Sept. 22, 2020, President Xi Jinping pledged that China would achieve peak carbon emissions before 2030 and carbon neutrality before 2060.

The paradox of carbon pricing

China has been planning a carbon trading market for years. In December 2017, the National Development and Reform Commission, the top economic planning agency, held a conference that signaled the construction of a national carbon trading market. The vast majority of China’s thermal power companies, primarily coal-fired and gas-fired power plants, were supposed to register for the market between 2019 and 2020.

Carbon trading is considered an effective market-based response to climate change as it requires polluters to pay for any emissions of greenhouse gases — in this case carbon dioxide — that they produce beyond a set limit.

Government departments start by setting caps on total carbon emissions that apply to all market-registered enterprises. Next, they introduce a nationwide system for polluters — in this case power generators — to trade emissions quotas. This creates a market incentive for companies to conserve energy and reduce their emissions.

However, China has yet to realize market-based pricing for electricity, meaning that power generators have no way to raise prices and share the costs of buying carbon emission quotas, saddling them with increased costs of power generation. Experts also worry that a lack of enforcement on carbon quotas will do little to curb emissions in the short term.

“If the price of carbon reaches 30 yuan ($4.64) per ton, the cost of carbon will account for 5% to 25% of the total cost of power generation,” according to the head of the carbon asset management department at one centrally administrated power generation company.

For thermal power generators, the national trading market means that carbon prices will be determined by a unified market. Coal prices in China have already been set by the market.

However, the prices that power generation companies charge their customers, are still set by regional or provincial governments. As a result, electricity prices vary by province or region.

So although coal prices are set by a market, electricity prices remain regulated and set by the government. The new round of institutional reforms in 2015 only brought electricity prices further down. Under such conditions, any increase in the cost of power generation would likely squeeze the profit margins of power plants and could the struggling ones in big trouble.

Duan Maosheng, director of the Center for China Carbon Market Research of Tsinghua University, explained that because electricity prices have yet to be fully marketized, emissions control policy takes into consideration both the direct emissions of electricity producers and the indirect emissions from power consumers.

“This is the difference between the carbon trading market in China and in Europe. The latter has already marketized its system. If China can do the same, then increasing the cost of power generation will increase the price of electricity, naturally leading users to consume less. Unfortunately, as things currently stand, end users in China are not affected by changes in the cost of power generation.”

The current system shields end users from the impact, increasing the cost of carbon, and thus power generation, while maintaining or lowering the price of electricity amounts to more pressure on the thermal power sector.

As a result, companies will be forced to weed out outdated generation units at a faster pace.

“The thermal power sector will bear the brunt of the impact,” said China Huadian Corporation Ltd., one of China’s five power generation groups.

In a response to Caixin, the company said that the reform of carbon pricing and the electricity market will change the point at which thermal power companies can break even. That in turn is expected to influence decisions on everything from investment in new power generation units to energy conservation and emissions reduction itself.

In contrast to thermal power, renewable energy will benefit from policies on carbon trading, carbon neutrality and when carbon emissions are supposed to peak. This industry is expected to see significant increases in the scale of installed capacity and electricity production.

Wang said that survival of the fittest based on the value of “carbon” was the fundamental principle of the carbon trading market.

“Basically, the market will put power generation companies under cost pressure, encouraging them to actively reduce carbon emissions. However, the primary concern in the initial stage of carbon trading is just to keep the market running smoothly, without any big fluctuations. This means that the pressure will not be that great at first,” he said.

In contrast, China’s national emissions cap is the sum of all provincial emissions quotas. The competent department pre-allocates 2019-2020 quotas equivalent to 70% of the thermal power supply volume in 2018. After verifying the 2019-2020 carbon emissions, it will refund quotas or ask companies to buy additional quotas according to units’ actual volume of thermal power they supply.

Zou Ji, CEO & president of Energy Foundation China, told Caixin that the carbon trading market should be based on a controlled cap and quota trades. The current model of determining a cap by adding up quotas does not conform to that principle.

China has yet to propose establishing an absolute cap on the carbon trade. Several insiders agree that it’s not an easy goal to achieve. Lin Jiaqiao, co-director of the Rock Environment & Energy Institute, suggests that until China reaches peak carbon dioxide emissions, it will be hard to estimate industry output, making it incredibly challenging to set a cap for the carbon trading market.

The combination of these factors has the makings of an inactive market, he said.