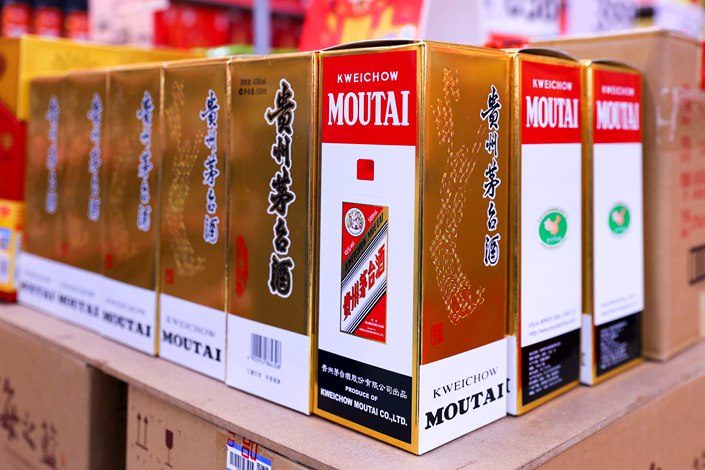 Chinese liquor giant Moutai is taking a series of moves aimed at keeping bottles of its namesake spirit to $230 apiece, even as some sell for double that in the run-up to the Lunar New Year. Photo: VCG

Kweichow Moutai Co. Ltd. is struggling to tap down head-spinning prices for its signature liquor, even as they top 3,000 yuan ($465) per bottle in the run-up to next week’s Lunar New Year holiday, a traditional time of peak demand.

The world’s largest liquor-maker has urged its distributors to sell its namesake spirit for 1,499 yuan per bottle, even as prices were topping 2,500 yuan in late January. In some instances bottles were going for as much as 3,200 yuan each for highly coveted cases containing six bottles each, according to multiple securities companies.

“The prices have only gotten higher, despite concerted efforts to contain them,” a Moutai regional sales manager told Caixin. He said the company has negotiated at multiple meetings with distributors to control the prices, but also worries about putting too much pressure on its longtime partners.

At the heart of the matter is Moutai’s position as a status symbol in China, making it the liquor of choice at any high-profile gathering. That status has made buying Moutai into a sort of investment for many, who may hoard the fiery spirit known locally as “baijiu” to wait for just the right price or occasion before parting with their treasure.

Among its many recent steps to rein in prices, the company has clamped down on distributors who charge premiums over suggested retail prices, and requested all bottles be sold individually rather than in the six-bottle cases. It is also discouraging vendors from stockpiling the liquor and barring some consumers from buying the drink.

The company initially said that starting from Jan. 1, all franchisee partners needed to sell at least 80% of their Moutai stock every month for 1,499 yuan per bottle. It also asked distributors to keep the packaging material to prove they were selling individual bottles and not the boxes of six. It later said all bottles must sell for 1,499 each, all part of a bid to prevent vendors from stockpiling the liquor in hopes of getting higher prices later.

Such stockpiling has been common in the past, since bottles of Moutai can typically increase in value by 10% per year — offering better returns than many other forms of investment.

Even when it’s sold at 1,499 yuan, scalpers often wait outside supermarkets to stock up and later resell their booty for much higher prices. At peak periods, such scalpers can earn an extra 1,000 yuan per bottle, according to one, who told Caixin that he could collect up to 200 bottles a day in Beijing.

Investors truly looking to cash in on Moutai’s big name need look no further than the company’s publicly-traded shares, whose meteoric rise in recent years has made it the world’s most valuable liquor-maker. The company’s shares have roughly doubled over the last year, giving it a market capitalization of more than $400 billion.

The broader value of baijiu, the general class of high-alcohol spirits that includes Moutai, is expected to continue on a bullish trend this year, according to a report from Minsheng Securities. The report pointed out that such spirits have been traded as a form of investment, and that such trends could help to further drive up Moutai and other baijiu shares.

Back at street-level, the company’s tireless campaign to rein in prices continues with the latest initiatives.

The company is now requiring vendors to sell their entire inventories by Feb. 11, Lunar New Year’s Eve, when many families gather for a traditional big meal similar to Christmas in the West. By doing so, the distiller hopes to stimulate more consumers to actually drink the alcohol, rather than purchasing it for investment and collection purposes.

As that happens, online platforms that sell the liquor appear to be lowering previous requirements for buyers. Two leading sites, JD.com and Suning.com, previously restricted purchases of Moutai to their paid members. But in February, there were signs that such requirement had been lifted , Caixin observed, with all registered users now allowed to order the spirit.

JD.com and Suning.com would not comment on whether their loosened restrictions were made in response to requests from Moutai. But the operator of one of the country’s biggest retail chains, Wumart Holding Inc., said it had not received any notice from the company to lift any curbs on buyers.