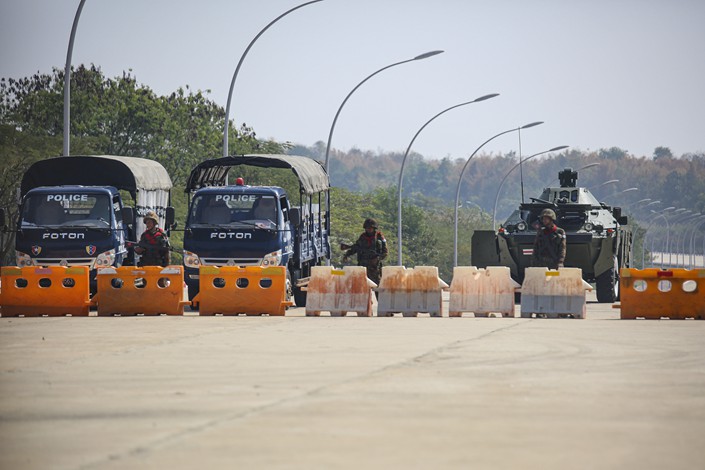 Soldiers and police vehicles block the road near parliament in Naypyidaw, Myanmar, on Monday. Photo: VCG

(Bloomberg) — Japanese brewer Kirin Holdings Co. said it will end its joint-venture partnership with Myanmar’s largest brewer in one of the first moves by a global company in response to the country’s military coup.

The Tokyo-based company said in a statement Friday it will be taking steps to terminate the partnership with Myanma Economic Holdings Public Co., which has ties with the military, “as a matter of urgency” given the recent developments in the nation.

Kirin isn’t currently planning to exit Myanmar entirely, according to Russell Roll, a company spokesman. “We hope to find a way forward that will allow us to continue contributing to Myanmar’s economy and society,” he said. Its operations in the country are small, accounting for just 1.7% of revenue and 6.8% of operating profit in the 2019 financial year.

It entered the Myanmar market six years ago, buying a 55% stake in the country’s biggest beer company as it sought to expand abroad. The Japanese company at the time called Myanmar an “exciting market,” but the investment has proved problematic, drawing fire from activist groups because of the joint partner’s military ties.

A United Nations fact-finding mission in 2019 called for sanctions against a network of companies owned by Myanmar’s military, including Myanma Economic Holdings, saying they helped carry out and finance nationwide human rights violations. While the firm’s corporate structure is opaque, the mission found it was influenced by a group of military elites led by army commander-in-chief Min Aung Hlaing, who drove the takeover of the government on Monday. In 2019, he was sanctioned by the U.S. for his role in alleged human rights abuses against the country’s Muslim minority Rohingya.

Kirin had already put its Myanmar operations under review, and last year said findings in an Amnesty International report indicating Myanma Economic Holdings was funding military activities were “at odds with our commitment to human rights and the people of Myanmar.”

The decision on Friday comes amid growing calls among rights groups and activists to boycott companies believed to be owned by the military. The UN mission previously identified more than 100 across diverse sectors from construction and gem extraction to manufacturing, insurance, tourism and banking. On Thursday, 19 marketing, communications and advertising agencies in Myanmar released a joint statement saying they would no longer provide services to companies linked to the military.

“Kirin’s bold and timely move to cut ties sends a strong message to the Myanmar military that their illegitimate and brutal coup and continued genocide, war crimes and crimes against humanity will not be tolerated,” Yadanar Maung, a spokesperson for activist group Justice For Myanmar, said in a statement.

International and domestic pressure against the military has steadily risen since Monday’s coup in which Aung San Suu Kyi and other top National League for Democracy officials were detained. Residents in Yangon sang songs and banged on pots for a third straight evening on Thursday following the first small-scale protest in Mandalay earlier in the day. Demonstrations have also begun to take shape in other cities across the country.

The U.S., China and other members of the United Nations Security Council called Thursday for the “immediate release” of all those detained in Myanmar while emphasizing the need for the “continued support of the democratic transition” in the Southeast Asian nation. President Joe Biden said the U.S. could reinstate sanctions on Myanmar if its military doesn’t “immediately relinquish the power they have seized” in a coup and release activists and officials.

“The Burmese military should relinquish power they have seized, release the advocates and activists and officials they have detained, lift the restrictions on telecommunications, and refrain from violence,” Biden said in a speech at the State Department.