By Yang Ge and Zhang Erchi 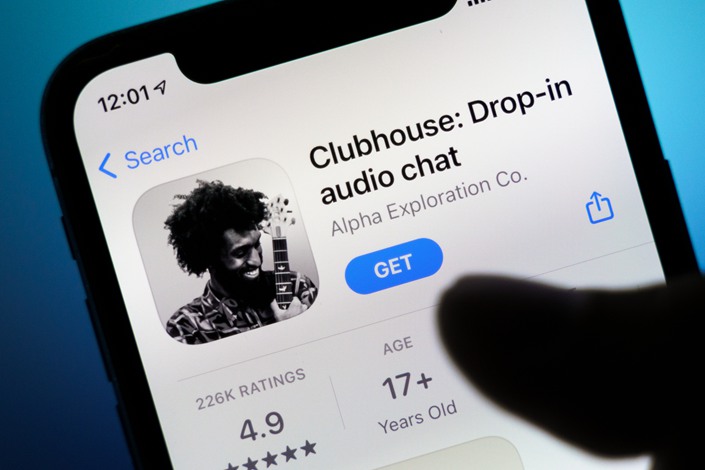 Clubhouse topped the charts in Germany, Italy, Japan, Hong Kong and Taiwan as the most downloaded mobile app in the Apple App Store on Sunday. Photo: IC Photo

Shares of two Chinese companies with ties to audio networking sensation Clubhouse have soared over the last week, buoyed by popularity for the invitation-only app that lets people set up ad hoc groups to chat on topics in real time.

Guangzhou-based Lizhi Inc. has been the biggest beneficiary of the Clubhouse craze on speculation that it could become the Chinese equivalent of the U.S. app. Clubhouse is currently only available on iPhones, but isn’t carried in Apple Inc.’s store on the Chinese mainland.

The Clubhouse craze lit a fire under Lizhi’s shares last week, with trading volume at more than 100 times usual levels on two days for a stock that previously attracted little investor interest since its Nasdaq IPO a year ago. The company’s stock nearly quadrupled in the three trading days between Feb. 2 and Feb. 4 last week, though it gave back some of the gains on Friday.

Still, at its latest level the stock is more than triple where it was at the start of last week. The stock had previously lost about two-thirds of its value in the period between its January 2020 IPO and before the recent rally. At the latest close, it is roughly at the same level as its IPO price of $11.

Another major beneficiary of the Clubhouse craze has been Agora Inc., also listed on the Nasdaq, which provides voice technology that other media have suggested is used on Clubhouse’s platform. Shares of Agora, which counts leading Chinese education firm New Oriental Education & Technology Group Inc. and dating app Momo among its clients, nearly doubled last week, with volume more than eight times usual levels on one day.

One other beneficiary with China ties has been Yalla Group Ltd. That company is being billed as the Middle Eastern Clubhouse equivalent, and has a Chinese founder who previously worked at local telecom equipment giant ZTE Corp. Yalla shares have roughly doubled over the last two weeks.

Launched last spring, Clubhouse is an invitation-only app that lets users put together discussion groups where they can trade their views in audio messages that are only accessible in real time and aren’t publicly archived. Codes for a Clubhouse invitations were selling on Taobao, Alibaba Group Holding Ltd.’s popular eBay-style marketplace, for more than 100 yuan ($15) each.