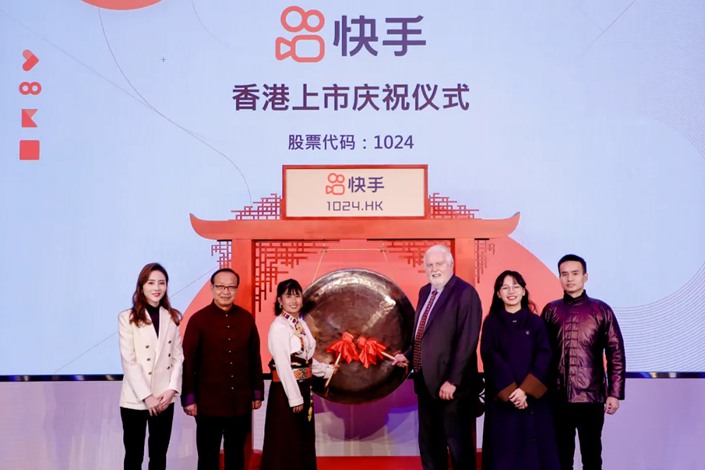 Kuaishou was listed on the main board of the Hong Kong Stock Exchange on Friday. Photo: Kuaishou’s WeChat Account

Shares of Kuaishou, a major rival of TikTok’s Chinese version Douyin, began trading at HK$338 ($43.60), surging nearly 194% from the IPO price of HK$115, ranking it seventh among Hong Kong-listed companies in terms of market capitalization. It raised $5.4 billion on its debut, making it the world’s biggest internet IPO since the $8.1 billion U.S. share sale of Uber in May 2019.

Kuaishou shares closed at HK$300 on Friday, pushing its market capitalization to HK$1.23 trillion, ranking it behind only Microsoft Corp., Tencent Holdings Ltd., Alibaba Group Holding Ltd., Meituan, Intel Corp. and China Construction Bank Corp., according to data from the Hong Kong Stock Exchange. Kuaishou, which first rolled out its short-video format in 2013, recorded turnover of HK$37.54 billion, the largest in the Hong Kong market on Friday.

What to Know About Kuaishou and Its Dazzling $5.4 Billion IPO
In Depth: Short Video Pioneer Kuaishou Primed for Biggest Tech IPO Since Uber

Kuaishou, which means “fast hand” in Chinese, is one of China’s biggest internet success stories of the past decade, part of a generation of startups that thrived with backing from Tencent. Along with TikTok parent ByteDance Inc., the decade-old company, which was transformed into a video app from an animation-maker by Su Hua and Cheng Yixiao in 2013, pioneered livestreaming and the bite-sized video format that has since been adopted around the world by the likes of Facebook Inc.