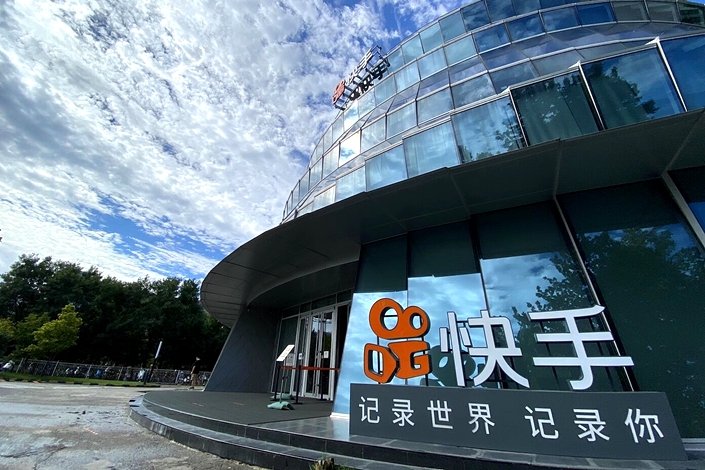 Kuaishou is expected to raise HK$42 billion from the sale of 365 million shares in its Hong Kong IPO. Photo: VCG

Short-video giant Beijing Kuaishou Technology Co. Ltd. is about to mount the biggest internet IPO since May 2019, after pricing its shares at the top of their range for an expected $5.4 billion debut Friday in Hong Kong.

Shares of the 10-year-old company, which remains little known outside China where it is the primary competitor to TikTok’s Chinese twin Douyin, will go public on the Hong Kong Stock Exchange at HK$115 ($14.80) a share, according to its latest filing to the bourse Thursday. It plans to sell 8.89% of its total shares, which would give it a valuation of around $61 billion.

Kuaishou is expected to raise HK$42 billion ($5.4 billion) from the sale of the 365 million shares, making it the world’s largest tech IPO since U.S. ride-hailing platform Uber went public to the tune of $8.1 billion in May 2019, according to Bloomberg.

However, emerging regulatory issues and the threat of muscular upstart Douyin, which last year obtained a coveted online payment license allowing it to launch an e-wallet and pursue a more aggressive e-commerce strategy, could yet rain on the firm’s parade.

The ambitious pricing decision came after the company found strong support from retail and institutional investors during a presubscription period that kicked off Jan. 26 as its retail share offering was overbooked 1,204 times and its international offering was 39 times oversubscribed. Kuaishou has exercised a “green-shoe” option that allows it to increase the proportion of shares available to retail investors from 2.5% to 6%.

The Kuaishou IPO has attracted 10 cornerstone investors — who are usually essential to secure a successful listing by subscribing to a large block of shares before formal marketing in order to boost confidence among retail buyers. The 10 investors have signed up to buy $2.45 billion in Kuaishou stock at HK$115 a piece, representing 45.23% of the total shares.

The lineup includes The Capital Group Inc., which would become Kuaishou’s largest external shareholder with 9.23% of the offer if the over-allotment option is not exercised, as well as Government of Singapore Investment Corp. (GIC Pte), Temasek Holdings Pte Ltd., Fidelity Investments Inc., BlackRock Inc. and Canada Pension Plan Investment Board (CPP).

Kuaishou, which means “fast hand” in Chinese, is one of China’s biggest internet success stories of the past decade, part of a generation of startups that thrived with backing from Tencent Holdings Ltd. Along with TikTok parent ByteDance Inc., the outfit co-founded by Su Hua and Cheng Yixiao in 2013 pioneered livestreaming and the bite-sized video format that has since been adopted around the world by the likes of Facebook Inc.

Read more
Tip Sheet: What to Know About Kuaishou and Its Dazzling $5.4 Billion IPO

While Kuaishou will beat Bytedance to a public listing, a Caixin analysis shows that’s one of the few metrics the company is leading on. Kuaishou became the world’s largest livestreaming platform at the end of 2017, but failed to anticipate the success of Douyin, which was founded in 2016, and has blazed a trail internationally with TikTok, despite geopolitical ructions.

The record-breaking investor frenzy to get in on Kuaishou’s IPO is not unlike that seen at the presubscription period for Ant Group Co. Ltd.’s colossal deal, which received 1.55 million applications from retail investors, allowing the bourse to freeze up HK$1.31 trillion in advance. Kuaishou said it has received 1.42 million retail-booking applications in the filing.

In the prospectus it filed to the Hong Kong bourse Thursday, Kuaishou boasted it had 305 million daily active users (DAU) as of September and they spend an average of 86 minutes on the app. However, its losses widened to 97.4 billion yuan in the three quarters through September, much larger than the 1.6 billion yuan loss it reported for the same period in 2019.

The company pinned its growing losses on a stepped-up marketing budget to expand its user base, enhance its brand recognition and to develop its ecosystem of partners.

Despite the explosive revenue, which grew nearly 50% to 40.7 billion yuan from the same period in 2019, largely fueled by user spending on livestreaming sessions and e-commerce, its DAUs trail Douyin, which said it had over 600 million in January. The Bytedance platform was last valued at $180 billion.

In a sign that the short-video app may face regulatory hurdles at home, Kuaishou was accused of massive copyright infringements by a government-backed copyright association Tuesday.

Kuaishou is likely to be removed from Apple’s app store if it fails to resolve the copyright issues, the copyright association said in a Tuesday statement.

Kuaishou said it will use about 35% of the proceeds of its IPO to “enhance and grow our ecosystem,” which included increasing the quality and diversity of content and improving the experience of users and business partners, as well as on marketing to grow the userbase.

Around 30% will be used for research and development, including in areas like big data and learning algorithms, and to attract and retain talent. A quarter of the funds will be earmarked for acquiring other products and companies, suggesting a spending spree could be on the horizon. Meanwhile, 10% will be used as working capital.

Kuaishou revealed Thursday that it would add former executives from e-commerce giant JD.com Inc. and Chinese super-app operator Meituan for a nine-person board of directors.

But all eyes will be on the three new hires for independent nonexecutive director spots.

They include 43-year-old Wang Huiwen, who co-founded Meituan and left his post as vice president to, in his words, “formally retire” on Dec. 18. While at Meituan, Wang focused on the firm’s core takeout delivery business, but he was considered the company’s enforcer, working alongside Wang Xing, who was seen as the strategy man. He will chair Kuaishou’s nominating and corporate governance committees.

The second is former JD.com executive Huang Xuande, who joined JD.com in September 2013 and served as chief financial officer until June 2020, when he handed his post over to former PwC audit partner Xu Ran. Huang officially retired on Sept. 16.

Su, who is also Kuaishou’s chairman and CEO, will be one executive director, while the other will be Chief Product Officer Cheng Yixiao. Company sources previously told Caixin that a major restructuring effort, which began in mid-2019 and saw the firm’s staff double to over 10,000, had created some confusion about which of the two men were now calling the shots.

The nonexecutive directors are representatives of the major investors of Kuaishou — Li Zhaohui is vice president of Tencent, where he also heads the investment and M&A department; Zhang Fei is partner at 5Y Capital; Shen Dou is executive vice president of Baidu Inc., and Lin Xinhe is founding partner of DCM China.

According to its prospectus, if over-allotment rights are not exercised, Su will hold 10.41% of the shares of Kuaishou after the listing, and Cheng Yixiao with have 8.25%. Tencent will be the largest shareholder with a 12.32% stake, while 5Y Capital will control 12.08%. DCM will have 6.5%.