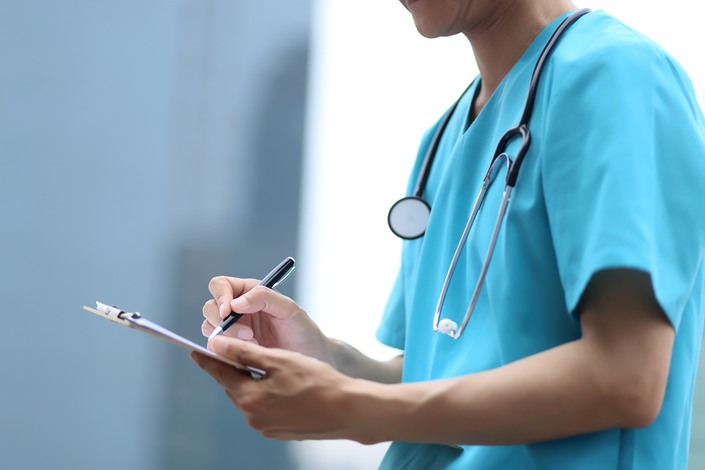 Liu didn’t want to pay for extra surgery, even though his doctor insisted it was essential. But he’d been lying on the operating table for an hour, and the anesthetic in his genitals was beginning to wear off.

The doctor, meanwhile, had Liu right where he wanted him, refusing to complete the circumcision unless he agreed to shell out thousands of dollars for additional procedures.

Mid-operation shakedowns were just one way that medical staff at Ouya Men’s Health Hospital, a private clinic in Northwest China, convinced hundreds of patients to buy expensive and unnecessary treatments, racking up millions of dollars in illegal revenue.

Emboldened by lax regulation and protected by a network of corrupt officials, the hospital perpetrated brazen health fraud for four years in a scandal that echoed a public outcry over unscrupulous private clinics several years ago.

Experts said the Ouya hospital scandal shows how China’s light-touch approach to regulating profit-hungry medical care providers continues to pose real dangers to the public at time when the number of private hospitals is growing rapidly across the country.

With its marble lobby and staff in pressed white uniforms, Ouya looked deceptively like the tens of thousands of other private hospitals that have sprung up around China in recent years.

The 200-bed facility in Yinchuan, the capital of the Ningxia Hui autonomous region, opened in 2015 and offered treatment for male health complaints like sexually transmitted diseases and infertility.

But behind the squeaky-clean facade lurked a well-oiled fraud operation, court records and media reports show. To lure customers, the hospital’s “internet department” issued false online advertisements and used search engine optimization to ensure more people saw them, according to a recent report by China Comment, a magazine affiliated with the state-run Xinhua News Agency.

Posing as medical personnel, department staff would launch online chats with prospective customers, using well-rehearsed scripts to gauge their health complaints, identities and incomes before encouraging them to seek treatment at the clinic.

Once there, staff presenting themselves as doctors or nurses would welcome patients to their appointments. Often, this was a ruse: A subsequent investigation found that 42 out of 77 such personnel were not listed in an official database for qualified medical workers, and most of those who did appear were registered to other hospitals, the report said.

During the appointments, workers would conspire to falsify or exaggerate patients’ conditions. Several former staff confessed to subjecting men with erectile dysfunction to “blood flow tests” that diagnosed a “severe low blood supply” in the penis, according to China Comment. Sometimes, nurses snuck torn-up paper into urine samples and presented them as proof that patients had “extreme inflammation of the prostate gland.”

Hospital staff even blackmailed patients on the operating table. In Liu’s case, the doctor in charge of his circumcision told him he had a prostate disorder and varicose veins in his penis, refusing to finish the procedure until Liu had agreed to pay 58,000 yuan ($9,000) for extra work, according to the report.

But at least Liu’s circumcision was a recognized operation. According to China Comment, a subsequent investigation by health authorities found that other surgical procedures offered by Ouya, including so-called “nerve severances” and “glans sensitivity reduction,” were “illegal and fraudulent.”

Such operations “would not have held any benefit to the patients’ treatment and would have opened wounds that could cause them physical, bodily harm,” said Deng Chunhua (邓春华), the head of the urology department at the First Affiliated Hospital of Sun Yat-sen University in Guangzhou and one of China’s foremost experts in male health, in an interview with Caixin. “If (the procedures) were ineffective, they would also have caused significant psychological damage.”

Local officials abetted the hospital hucksters in return for gifts and lavish meals, according to the results of a later probe (link in Chinese) by Yinchuan’s Communist Party graft-buster, which went on to discipline 13 people for corrupt dealings with a “malicious criminal gang” (link in Chinese). China Comment reported that some market supervision officials helped Ouya to evade malfeasance allegations despite the market regulation bureau receiving more than 80 complaints between 2017 and 2019 on its public services platform.

A court later found that Ouya kept some of the victims quiet by using threats and intimidation. Deng told Caixin that some of the men may also have felt too embarrassed to report their experiences. “On one level, patients are reluctant to bring up male or sexual health issues. On a deeper level … people who have been tricked rarely think reporting it will achieve anything.”

Although local authorities eventually cracked down on Ouya’s illegal advertising and questionable business practices — even temporarily shuttering the company for “rectification” on three occasions — the scams persisted for four years until local police opened a formal investigation into the hospital in 2019. Last August, the court ruled (link in Chinese) that Ouya had conned around 350 people, caused injury to 69, and illegally earned 100 million yuan.

At the trial, some 48 people were convicted of crimes including fraud, extortion and deliberate bodily harm. All received prison sentences, with the group’s ringleader, Su Yixiong, getting 20 years behind bars.

Experts interviewed by Caixin expressed shock at the nature and extent of the offenses. “I really think these people are terrible,” said Zheng Xueqian (郑雪倩), the head of Beijing Huawei Law Firm and a professor who advises the government on legal matters relating to health. “I very much think they’ve tarnished the good name of our hospitals and health industry.”

Public security bureaus in Ningxia and Yinchuan declined Caixin’s request for comment. Efforts to contact Liu and other victims were unsuccessful.

The country added (link in Chinese) more than 1,100 private hospitals in the 12-month period through October, bringing the total number to 23,000, according to the National Health Commission. Private hospitals, which include those run for profit and those run by nonstate entities for the public good, now outnumber their public counterparts by two to one, though experts said they account for much less than half of all patient visits.

However, a succession of scandals has dogged private medical care providers, notably when the death of a college student in 2016 was linked to misleading online advertisements for discredited cancer treatments issued by a vast network of for-profit health care providers in the southeastern region of Putian.

The Ouya case is an “extension” of the problems associated with the Putian model and an “inevitable result” of an industry at an incomplete stage of development, said Zhou Shenglai (周生来), the head of the special committee on disease and health management at the Chinese Hospital Association.

Several legal and policy specialists told Caixin that although China has laws and regulations subjecting both private and public hospitals to the same level of oversight, policy gaps and inconsistent enforcement frequently created opportunities for abuses in the private sector.

Additionally, the governance of health care providers is “weighted toward planning and overall structure” but remains “quite weak on regulating the profession’s actual operations,” said Liu Jitong (刘继同), a professor of health policy and management at the Peking University School of Public Health.

A culture among regulators to neglect enforcement until crises occur also hinders the sector’s healthy development, according to Zhou. “We need to shift away from issuing post-facto punishments and toward managing things both in advance and as we go along,” he said.

Years after the Putian scandals damaged trust in China’s private health care business, policymakers are still grappling with how to rein in the industry’s excesses.

The government has supported the growth of private providers as part of health care reforms that seek to pivot away from China’s historically centrally planned system to one that offers safer, more effective and more flexible coverage.

Liu Jitong called for a discussion on the nature of the private health sector and warned against its overcommercialization. “These hospitals should be for the public good — they’re not businesses,” he said.

Zhou said China’s future reforms should “greatly support and promote” the development of private and “socially managed” hospitals so that they ideally account for up to 60% of all patient visits, in order to “relieve pressure on the government and strengthen the dynamism of health care providers.”

He added that the country should tighten hospital inspections and liberalize rules preventing doctors from practicing at multiple institutions at the same time, a move he said would combat the fraudulent registration of medical professionals.

“Government regulation, including supervision and management, should treat both public and private medical institutions exactly the same,” said Gu Xin (顾昕), professor at Zhejiang University’s Center of Social Welfare and Governance, who specializes in health policy.