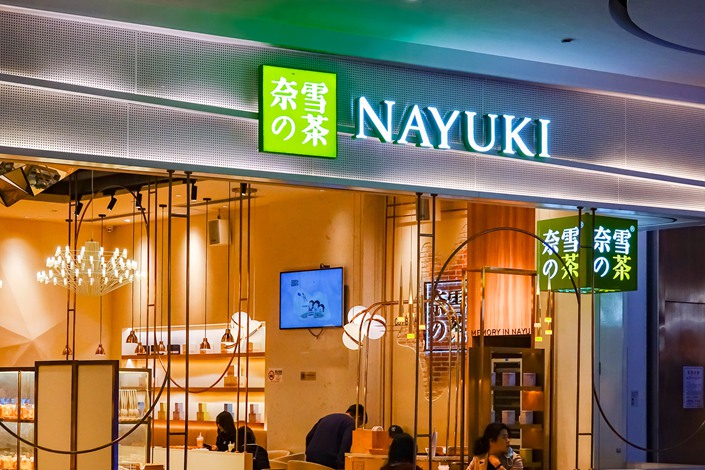 Money-losing premium tea specialist Nayuki Holdings Ltd. has filed to list in Hong Kong, shifting gears from an earlier plan to float shares in New York as it races to beat larger rival HeyTea to market.

The two rivals are the largest players in a booming market for premium teas favored by younger Chinese who often eschew cups of the traditional hot drink for more flavorful offerings that mix in everything from chewy bubbles to fruit, caramel and even cheese foam.

Nayuki didn’t disclose a fundraising target in its prospectus filed to the Hong Kong Stock Exchange late on Thursday as China began to celebrate the weeklong Lunar New Year holiday. But a year ago, Bloomberg reported the company had submitted confidential filings to the U.S. securities regulator for a New York listing to raise as much as $400 million.

The company was valued at about $2 billion at the end of last year when it conducted its latest fundraising of $100 million, according to Bloomberg. Thus at that valuation, a typical IPO float comprising 10% to 20% of the company’s shares could still see it raise up to $400 million.

Nayuki said it would use the funds to upgrade its technology, as well as for an aggressive expansion in the highly competitive space. The company had 422 stores at the end of last September, and the number was already up to 507 by the time of its IPO filing. It plans to open 300 stores this year, and another 350 in 2022, according to its prospectus. Most of those would be in top tier cities where consumers aren’t afraid to spend between 20 yuan ($3.10) and 30 yuan for a cup of flavored tea — similar to what they would pay for a cup of coffee from Starbucks.

By comparison, HeyTea has about 700 stores throughout China.

The premium tea market has big potential, expected to grow by about 24.5% annually to reach about 340 billion yuan in annual sales by 2025, according to data from market research firm China Insights Consultancy cited in Nayuki’s prospectus. Still, relatively low barriers to entry have led a flood of players to enter the market, with numerous rival outlets often vying for business in busy shopping and commercial areas.

That competition, combined with the impact of the Covid-19 pademic, pressured retailers from the young sector last year. Nayuki said its average daily sales per store in the first nine months of last year tumbled to 20,100 yuan per day, around 30% lower than the same period a year earlier.

“As mandated shutdowns and limited operation orders went into effect across China from late January to early April 2020 when the Covid-19 outbreak peaked in China, we had experienced an immediate and drastic reduction in sales levels compared to the same periods in 2019,” the company said. “Approximately 61% of our Nayuki teahouses in China had temporarily closed for seven or more days during February 2020 when the Covid-19 outbreak peaked in China.”

But it added that business was largely back to normal by the end of July last year as China brought its outbreak under control, and that average daily store sales were at about 85% of year-ago levels during last year’s third quarter when compared with the same period of 2019.

Nayuki’s revenue grew 21% to 2.1 billion yuan during the first nine months of last year compared with a year earlier. But its loss ballooned over the same period to 27.5 million yuan from 3.9 million yuan a year earlier. Such a loss-fueled rapid growth model was also used by the now-infamous Luckin Coffee, which opened stores at an explosive clip before hitting the brakes nearly a year ago with its disclosure of a major revenue-inflation scandal.

“Going forward, while we will continuously drive sales of our new and existing Nayuki teahouses through prudent network expansion, we will seek to achieve an optimal balance between network growth and profitability by focusing more on improving our operational efficiency at the store level,” Nayuki said in its prospectus.

Co-founded by husband and wife Zhao Lin and Peng Xin, who control about two-thirds of the company pre-IPO, Nayuki opened its first teahouses six years in the southern boomtown of Shenzhen. Its investors include Tiantu Capital, Shenzhen Capital Group and PAG. The IPO is being underwritten by JPMorgan, Huatai International and CMB International.