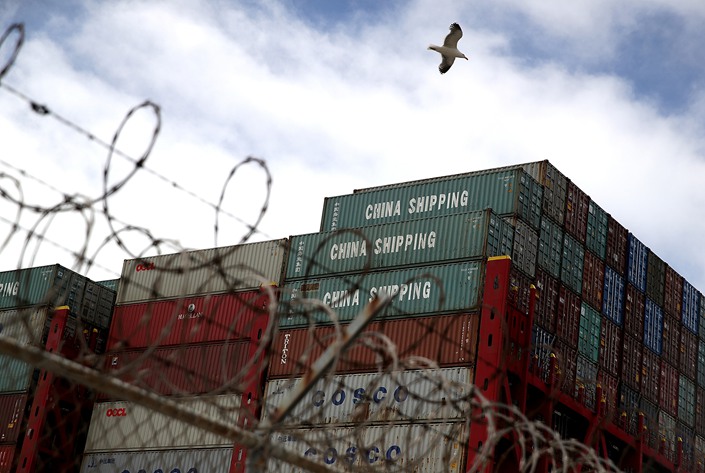 Shipping containers sit on a ship at the Port of Oakland, California, on June 20, 2020.

U.S. importers from Asia caught flat-footed by a surge of orders in the second half of 2020 turned to Chinese factories to meet the demand, a clear sign that despite some shifting of production to lower-cost countries, the so-called world’s factory won’t be knocked off its perch anytime soon.

U.S. containerized imports from China in 2020 rose 2% year over year, after falling 10.9% between 2018 and 2019, according to IHS Markit data. Last year, China accounted for nearly 59% of all Asian imports into the United States, approximately the same as 2019 but 6 percentage points lower than 2018, the result of a gradual shift of production to lower-cost countries along with U.S. import tariffs on Chinese-made goods.

So what changed? Under the gun from customers, U.S. importers turned to core production sources in China as the urgency of not missing orders trumped additional costs imposed by tariffs and higher manufacturing costs. And although Chinese exports to the U.S. outnumber those of Vietnam by approximately five times, Vietnamese exports jumped 20% in 2020 from 2019.

“Since the national lockdown was lifted, China has acted as the manufacturer of last resort while other trading economies suffer from supply chain disruptions,” according to Qing Wang, a professor of marketing and innovation at Warwick Business School in England.

With significant raw materials and components coming from China to feed factory production in Southeast Asia, typhoons and shipping capacity restrictions can add delays — up to four weeks — to production cycles even before assembly can begin, said Daniel Krassenstein, supply chain director for the industrial packaging firm Procon Pacific, who has spent his career managing supply chains in South and Southeast Asia.

From Southeast Asia and the Indian subcontinent, there’s less frequency and scope of container services to the U.S. than directly between China and the U.S. For sourcing goods with robust direct connections from Southern India and Bangladesh, transshipment through Colombo or Singapore is also necessary, while some goods through Southeast Asia will move through Hong Kong before heading to North America. Both routings add days to total delivery times to U.S. customers.

Yet, transit time is just one of the factors U.S. importers consider when sourcing. Ultimately, facing rising Chinese manufacturing costs — due to wage increases, social welfare taxes such as maternity leave, increased environmental compliance, and, of course, tariffs — U.S. importers have three choices, Krassenstein said. They can absorb the costs, push the costs onto the consumer, or look outside of China, as they often do. But by doing so, shippers sacrifice lead times — risking either stockouts or added inventory cost to prevent stockouts — and quality, in exchange for lower production costs.

Manufacturing of low-margin, labor-intensive goods such as footwear and apparel has been moving out of China for more than a decade. Average labor costs have doubled since 2009, although wages across Southeast Asia are rising too, according to sourcing strategists.

U.S. import demand from Asia in 2020 was colored by how Americans were consuming while staying at home, and which countries had a natural cluster of such producers. Chinese and Vietnamese exports of TVs and other electronic equipment jumped 16.2% and 60.8%, respectively, in 2020 from 2019. Vietnam, a hub for furniture production, saw its exports of couches and credenzas jump 31%. Vietnamese furniture exports have been expanding 20% annually for the last five years. And those countries dependent on apparel exports — with demand centered on sweatpants rather than new fashion — saw sharp decreases as total Asian exports of those products plunged 34% last year.

How the Biden administration addresses the approximately $370 billion in U.S. tariffs on Chinese goods will factor into sourcing patterns for U.S. importers from Asia, but the new president hasn’t made any promises to repeal those tariffs. Trade experts argue the taxes, which importers pay and often pass onto consumers, give Biden leverage in trade talks.

The lack of schedule reliability within the containerized supply chain may change importers’ calculations on how much risk they’re willing to take by extending their supply chains in Southeast Asia and the Indian subcontinent, rather than the traditional China-U.S. pipeline supported by world-class ports and inland infrastructure at origin. If anything, this dynamic should drive logistics managers back into sourcing decisions, rather than leaving them solely to procurement managers.