PBOC’s Message to Markets: Focus on Interest Rates Not Liquidity 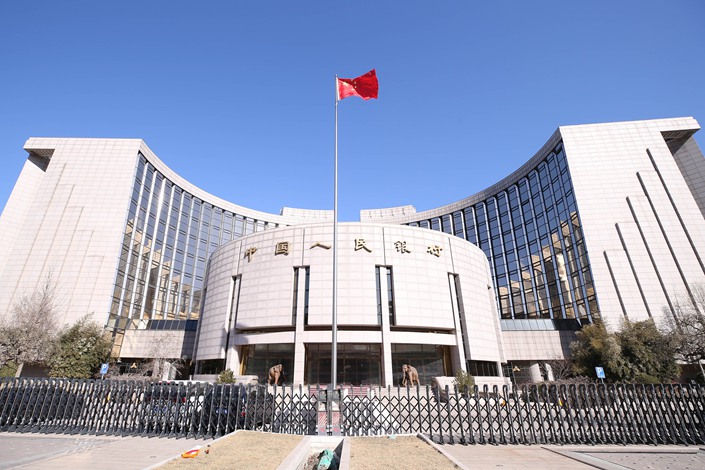 The headquarters of the People's Bank of China in Beijing on Tuesday. Photo: VCG

China’s central bank has sent a message to investors to focus more on money market interest rates rather than how it manages the amount of cash in the financial system, as speculation mounts that its unusual liquidity withdrawals around the Lunar New Year holiday signal a tightening of monetary policy.

The Financial News, a newspaper backed by the People’s Bank of China (PBOC), carried an opinion piece on its app on Thursday that was later published on the front page of the newspaper on Friday, emphasizing that the central bank’s focus was on keeping short-term benchmark interest rates steady and that liquidity injections and withdrawals were driven by market conditions and demand. The article was also posted on the central bank’s WeChat account on Thursday.

The newspaper often acts as a channel for the PBOC to communicate unofficially with the markets, and the article was widely interpreted as aimed at reassuring skittish investors that the central bank’s liquidity operations aren’t a sign that monetary policy is being tightened. PBOC officials have repeatedly said that there will be no sudden or sharp shifts in policy this year amid concerns that the economic recovery from the coronavirus pandemic isn’t yet on solid foundations.

“Now (market entities) should not focus too much on the size of the central bank’s (open market) operations (OMO), or they may misinterpret the (central bank’s) monetary policy stance,” the commentary (link in Chinese), penned by Li Guohui, said. Instead, they should focus on policy rates, including those on the medium-term lending facility, and other rates on instruments sold by the PBOC in OMO, the commentary said. OMO instruments include repurchase and reverse repurchase agreements conducted in the interbank market.

The PBOC traditionally injects hundreds of billions of yuan into the financial system before the Lunar New Year holiday to make sure there’s enough money to meet surging demand partly from companies paying year-end cash bonuses to workers and from individuals who use the break to go on a spending spree and send gifts of red envelopes stuffed with cash.

But this year, the central bank added far less cash and also refrained from cutting banks’ reserve requirement ratio (RRR), a liquidity tool that has often been used before the Lunar New Year in recent years to inject funding into the financial system. Some economists said (link in Chinese) the PBOC’s deviation from the norm had sowed confusing among investors about the direction of monetary policy. On Feb. 8, in its daily OMO statement (link in Chinese), the central bank explained why it was pumping in less liquidity, saying that demand for cash withdrawals was significantly lower than in previous years, while fiscal expenditure had increased considerably.

In the runup to the Lunar New Year, when markets close for the weeklong holiday, the PBOC injected 430 billion yuan ($66.6 billion) in short-term money via reverse repo agreements that would mostly expire soon after the holiday ended. Not only was that significantly lower than the 1.18 trillion yuan added before last year’s break, the PBOC surprised many investors by only using seven-day and 14-day reverse repos and refraining from using longer-term tools including one-month reverse repos, the article said.

But it reiterated the PBOC’s Feb. 8 explanation, pointing out that demand for cash was lower than usual because millions chose to spend the holiday in their city of residence instead of going back to their hometown. The central bank’s OMO have also become more targeted, allowing it to maintain the stability of money market rates with lower levels of injections.

The central bank itself has been trying to make this point for some time. In its 2020 fourth-quarter monetary policy report (link in Chinese), it noted that its OMO are adjusted to take into account many temporary factors such as market demand, and that changes in its operations don’t fully reflect market interest rate trends, nor do they reflect changes in policy interest rates.

And despite the less generous addition of liquidity, money market rates were for the most part relatively stable before and after the holiday. The average DR007, a key money market interest rate that reflects the cost of borrowing between banks for a seven-day period, stayed at an average of 2.29% in the eight working days before the start of the holiday, while the rate on Thursday, the first trading day after the break, was 2.23%, according to official data compiled by economic data provider CEIC.

The focus on keeping rates stable was evident in late January when the PBOC’s actions to continuously drain funds from the financial system through OMO sent the DR007 surging to a record high of 3.17% on Feb. 1 from 2.4% just a week earlier, official data show. Other short-term money-market rates also shot up as traders and investors fretted over a potential liquidity shortage.

The rate gains poured fuel onto the debate over whether a turning point had been reached in monetary policy, Xu Gao, the chief economist at BOC International (China) Co. Ltd., said in a recent opinion piece (link in Chinese). Comments by PBOC adviser Ma Jun in late January warning of asset bubbles contributed to the speculation that tighter monetary policy was on the way.

However the PBOC quickly reversed course, providing enough liquidity to the interbank market to bring the DR007 rate back down to an average of 2.29% before the holiday began, helping to ease investor concerns.