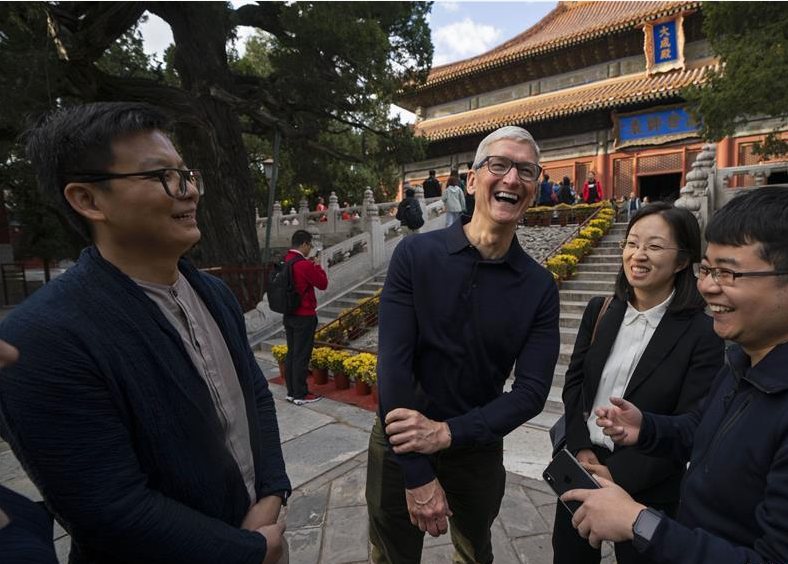 A 22-year-old Chinese university student, who has amassed millions of fans for creating videos about high-tech electronic gadgets, has recently been catapulted to online stardom after a video in which he had a one-on-one talk with Apple CEO Tim Cook went viral on Weibo, one of China’s biggest social media platforms.

On Thursday, the young university student, who only gives his surname as He, posted a video on his Weibo account, in which he asked Cook several questions about Apple’s corporate culture, how the company reacts to feedback from Chinese customers and what it has done to help elderly people embrace the fast-changing digital world.

Some people however have viewed the video as being more of a publicity stunt with Cook seemingly using it to show how creative Apple is and the importance the U.S. tech giant attaches to the Chinese market.

“There is no formula for innovation. But what we do is we have a culture of creativity and a culture of collaboration. And these two things together, when they intersect, create enormous innovation,” Cook said in the video. The remark was strongly echoed by He, who was “astonished” at the battery performance of Apple’s M1 chip-powered MacBook Air, which He described as “black magic”.

Cook also disclosed in the video that some features of Apple products were developed based on Chinese consumers’ feedbacks such as the iPhone’s night mode camera, which automatically turns on when a low-light environment is detected, thus reducing editing trouble later.

Since taking the helm at Apple in 2011, Cook has paid several visits to China, meeting government officials, business partners and Apple store employees there, as the country has become one of the company’s most important sales drivers.

Although the video is full of flattering words about Apple and its products, most internet users focused more on the student as ordinary people rarely get the opportunity to talk to Apple’s head.

“Compared with He, who has already exchanged views with Apple CEO Tim Cook on life goals and the future of the world, I, at the same age, have just asked Apple store staff for a discount,” a Weibo user commented.

Meanwhile, some turned up their noses at the talk. One internet user, who publishes tech stories regularly online, wrote that the talk was just a marketing device used by Apple, citing a separate video in which He admitted that he was contacted by Apple before the talk.