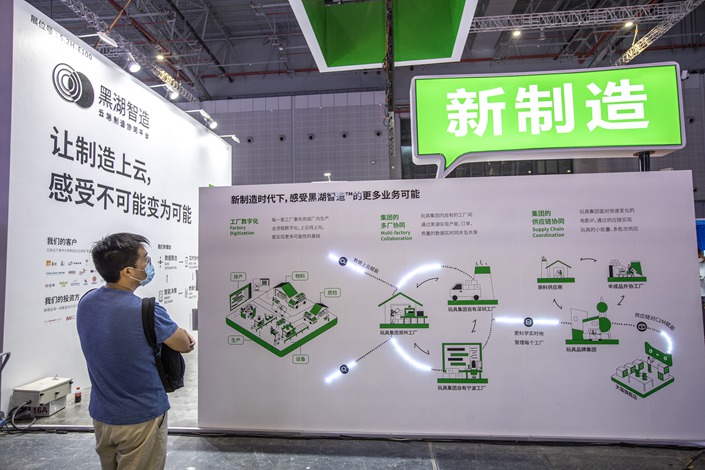 Black Lake designs manufacturing execution systems that help companies upgrade and digitize their systems, including better integrating them with partners in their supply chains. Photo: VCG

Founded in 2016 in Shanghai, Black Lake designs manufacturing execution systems, using a “software as a service” business model. It helps companies to upgrade and digitize their systems, including better integrating them with partners in their supply chains. The company launched its first products in 2018, and currently services nearly 2,000 manufacturers, include bottled water giant Nongfu Spring Co. Ltd., electric car leader Tesla Inc. and the state-owned energy major known as Sinopec.

Black Lake CEO Zhou Yuxiang told Caixin that the company’s latest funding round aimed to attract strategic investors. He pointed to China Renaissance as an example due to its previous investments in a number of retail and consumer brands, such as the recently listed toy-maker Pop Mart International. Black Lake hopes to boost its clientele among that group.

The company has earmarked money from its latest funding to boost its presence in Southeast Asia, fertile ground due to the high concentration of manufacturers in countries like Vietnam, Indonesia and Malaysia. Accordingly, Black Lake hopes to leverage Temasek’s strong connections in the area stemming from its position as one of the region’s leading investors.

Zhou said Black Lake originally planned to enter Southeast Asia last year and even signed some contracts with clients in the region. But it had to delay those plans due to travel restrictions during the Covid-19 pandemic. “Right now we’re still in the early proof-of-concept stage” Zhou said.

Black Lake completed its second major funding round in May 2019, raising 150 million yuan. No valuation was announced after either funding round. Bertelsmann is one of its earliest investors, having participated in all three of its major rounds to date.