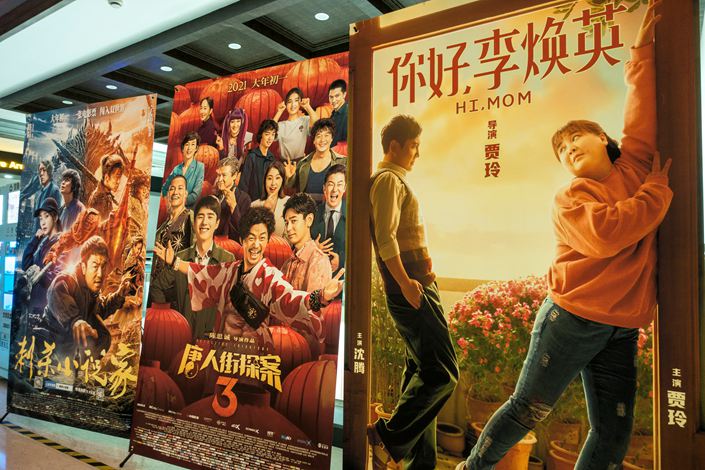 "Hi, Mom" benefitted from positive mentions in many official media, which tend to favor such stories that focus on traditional values like filial piety and patriotism. Photo: IC Photo

A sleeper Chinese equivalent of the 1985 hit movie “Back to the Future” has quietly overtaken a higher-profile comedy to become the nation’s highest earning film during the Lunar New Year holiday period, fueled by word of mouth and publicity from state media.

“Hi, Mom” had raked in 4.2 billion yuan ($650 million) at the Chinese box office as of Tuesday, moving past “Detective Chinatown 3” to take over the top spot during the lucrative holiday period, according to industry website Maoyan. Both films have been out for 12 days, and their latest totals make them China’s fifth and sixth best-earning films of all time, Maoyan data showed.

“Hi, Mom” tells the story of a girl born in the early 1980s who feels she has continually disappointed her mother. When disaster strikes she is suddenly transported back to a time just a year before her birth. But unlike Michael J. Fox’s character who spends most of the similarly-themed “Back to the Future” trying to ensure his own existence by leaving the past intact, the central character in “Hi, Mom” tries to alter the past to give her mother a better life without herself as a constant disappointment.

The story is loosely based on the life of the movie’s director, Jia Ling, who also plays the central character and made the film as a tribute to her mother.

Compared with “Detective Chinatown 3,” “Hi, Mom” got off to a slow start at the box office. It earned a relatively modest 291 million yuan on the first day of the Lunar New Year on Feb. 12, compared to more than three times that amount for “Detective Chinatown.”

But unlike many films that quickly fade after their first week of release, “Hi, Mom” gradually gained momentum on strong word of mouth. It received an 8.1 rating on the popular Douban site, versus a more mediocre rating of less than six for “Detective Chinatown.” Riding that momentum, “Hi, Mom” overtook its higher-profile rival for best single-day at the box office by the fourth day of the Lunar New Year. Its momentum has continued since, with the movie accounting for more than half of the nation’s total box office for the week from Feb. 15 to Feb. 21.

The film also benefitted from positive mentions in many official media, which tend to favor such stories that focus on traditional values like filial piety and patriotism. “(The mother character) Li Huanying in the movie is the embodiment of countless mothers in real life,” wrote the Central Commission for Discipline Inspection (CCDI) – the country’s highest disciplinary body overseeing party members, on its website last week. “They are equally ordinary and great, giving us warmth and strength.”

China is generally considered the world’s second largest box office, and even surpassed the U.S. to become No. 1 last year due to widespread closures in the latter during the global Covid-19 pandemic. Whereas cinemas in much of the world remained closed for most of last year starting in March, China’s theaters were largely reopened for most of the second half of the year as the country brought its local outbreak under control.

As the pandemic has continued to wreak havoc this year, the Chinese box office has remained one of the world’s few bright spots. With the economy almost back to normal, consumers flocked to Chinese cinemas over the holiday period, sending box office receipts to a record. From Feb. 11 to 17, movie takings in China topped 7.8 billion yuan, 32.5% more than during the holiday period in 2019, according to data from Dengta app, a data and services platform for the cinema industry.