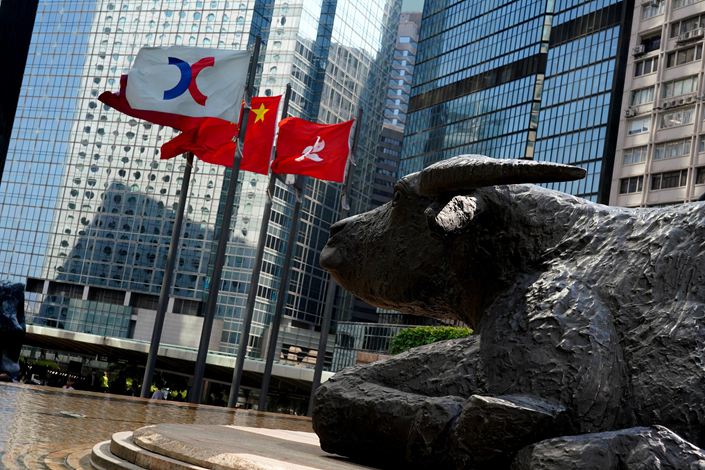 Given the considerable financial pressure on businesses and individuals, the financial secretary said now was not the appropriate time to revise tax rates on profits and salaries. Photo: VCG

The Hong Kong government plans to raise the stamp duty on equity transactions by 30% to boost its revenue as the city is set to rack up a record fiscal deficit and Financial Secretary Paul Chan warned that the shortfall would persist for several years.

The proposed increase, announced on Wednesday in Chan’s budget speech, will be the first since 1993 and the news sent shockwaves through the local stock market. The benchmark Hang Seng Index closed 2.99% lower, and the shares of Hong Kong Exchanges and Clearing Ltd. (HKEX), which operates the city’s stock exchange, plunged 8.78%, the biggest daily drop in more than five years.

Hong Kong’s deficit will have ballooned to an estimated HK$257.6 billion ($33.2 billion) in the fiscal year ending March 31, 2021, Chan said in his speech, rising from HK$37.8 billion the previous year which was the first shortfall in 16 years. The government’s finances have been hammered over the past two years, first by the unrest that took place in 2019 and 2020 and subsequently by the Covid-19 pandemic which devastated the local economy and led the government to spend more than HK$300 billion to support the economy, amounting to over 5% of the city’s GDP.

The deficit is forecast to decline to HK$101.6 billion in 2021-2022, accounting for 3.6% of GDP, and shortfalls are likely to persist “for a number of years,” Chan said, as the economy will continue to require fiscal support and recurrent spending increases. He warned that the government will have to find new sources of fiscal revenue or revise tax rates.

Raising levies on stock transactions is an attractive option for the government. The stock market is booming and the two connect programs linking the city’s exchange with those on the Chinese mainland have led to a surge in trading. Stamp duty, including that levied on stock transfers, is a key source of revenue –– in the 2020-2021 financial year, the government estimates it will hit HK$79 billion, HK$4 billion higher than originally forecast, mainly due to “hectic” trading on the stock market, Chan said. Figures provided in his speech show it will account for 14.5% of the estimated HK$543.5 billion total government revenue for the year.

Chan said the government will introduce a bill to increase the rate of stamp duty on stock transfers to 0.13% from the current 0.1%, although he didn’t give a timetable. Some governments, including in Japan and the U.S., do not tax stock transactions and a lawmaker in the Legislative Council raised the issue recently, asking whether the government planned to adjust the tax.

Given the considerable financial pressure on businesses and individuals, Chan said now was not the appropriate time to revise tax rates on profits and salaries.

A spokesperson for HKEX said the company was disappointed with the government’s decision but acknowledged that the tax was an important source of government revenue.