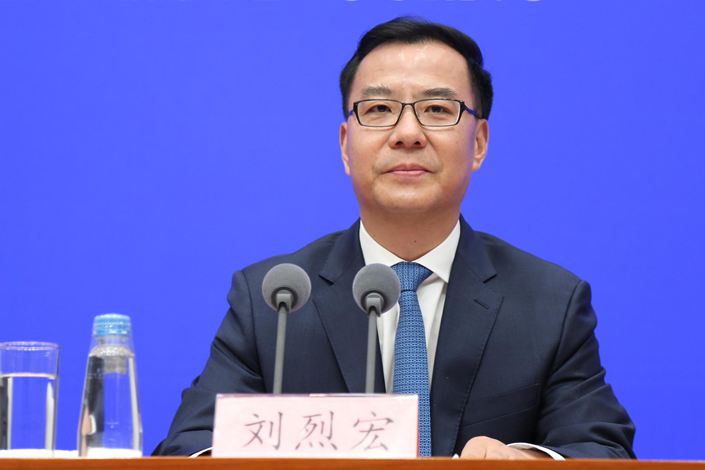 After a year and a half of frenzied construction and hundreds of billions of yuan in spending, China has emerged as the clear global leader in 5G infrastructure with a dominant 70% of the world’s base stations, the latest government data show.

The nation now has more than 718,000 base stations for the cutting-edge communications technology, covering all of its major cities, said Liu Liehong, a vice minister at the Ministry of Industry and Information Technology (MIIT). Domestic sales of 5G-enabled devices, mostly smartphones, have totaled more than 200 million to date, with more than nine of every 10 smartphones sold in China now 5G-enabled, he added, speaking Tuesday at a major telecom event taking place in Shanghai.

Analysts said that China’s dominant position in 5G owes to Beijing’s strong focus on the technology and its ability to execute plans through its state ownership of many key sector players, including the nation’s big three carriers. They added its strong position is likely to continue, though its share of the global market will fall gradually as other countries step up construction.

China’s building frenzy dates back to mid-2019 when the MIIT issued 5G licenses earlier than many expected, just as the U.S. was stepping up pressure to limit China’s access to many key advanced technologies. China is placing big priority on the space, which will underpin many key technologies of the future by enabling applications like telemedicine, self-driving cars and smart devices that can talk to each other over the internet.

That kind of prioritization has touched off a spending frenzy by the nation’s three state-owned wireless carriers, China Mobile, China Unicom and China Telecom, which often act in lockstep when carrying out Beijing’s agenda. All three have launched 5G subscription plans, with handsets often included in their promotions.

In last year’s third quarter, China accounted for 77% of the nearly 100 million 5G smartphones shipped worldwide, followed by the U.S. at a distant second with 7% and South Korea at third with 4%, according to data tracking firm IDC.

Liu pointed out that telecom product and service providers have spent a collective 260 billion yuan ($40 billion) on the technology to date. That includes construction not only by the big three carriers, but also by industry-specific network operators in areas like energy, medicine and education. He noted that 5G customers in China on average are using 50% more data than those using older 4G service that is still most widely used in the rest of the world.

The number of 5G networks globally now stands at 144, with another 90 under construction, said Mats Granryd, director general of GSMA, organizer of the Shanghai event where Liu gave his speech. Granryd added that 5G networks should be accessible to one-fifth of the world’s population by the end of this year, and that global investment by 5G carriers will reach $1 trillion by 2025.

Among major developed markets, South Korea and Japan have been some of the more aggressive in rolling out the new service. Europe has been more restrained because local carriers can’t justify big rollouts, said Jefferies analyst Edison Lee. Many European carriers are also moving slowly due to pressure from their home governments and other sources not to use 5G networking equipment from Huawei, one of the world’s top suppliers.

The administration of former U.S. President Donald Trump put huge pressure on many of America’s allies not to use Huawei 5G equipment, saying it could compromise national security due to alleged company connections with Beijing. At the same time, Trump also used sanctions to stop Huawei from obtaining the core microchips and other key components that power its 5G base stations and smartphones.

Read More
In Depth: Huawei Eyes ‘Not Made in America’ Chip Supply Chain as Stockpiles Dwindle

The U.S.’ own 5G rollout has been dampened by the recent merger of two of its smaller national carriers, Sprint Corp. and T-Mobile US Inc., Lee said. He added the nation’s two leading carriers have been slower to build out systems due to the high costs, and have mostly focused on building up capacity in the centers of key cities.

“Most of the 5G build-out in 2020 outside of China happened in the Middle East and developed Asia,” he said.

China’s share of the 5G market will come down as other countries pick up their pace of construction, said IDC analyst Cui Kai. He said the country’s current dominant position owes to several factors, led by Beijing’s determination to promote the technology as part of its broader plan to develop “new infrastructure.” He added that carriers are also leveraging their aggressive buying as a way to get big discounts from equipment suppliers.

“I think that China will maintain its place as the global leader,” he said. “Perhaps it won’t be at 70% share, but the drop won’t be too large, perhaps it will fall to 60% in 2021 and 50% in 2022. The actual ratios will depend on the recovery from the pandemic outside China. As to whether or not foreign carriers will invest heavily, this of course will depend most importantly on the appearance of ‘killer apps’ that can take advantage of the technology.”