China Kicks Off 5G Era with Issue of Mobile Licenses 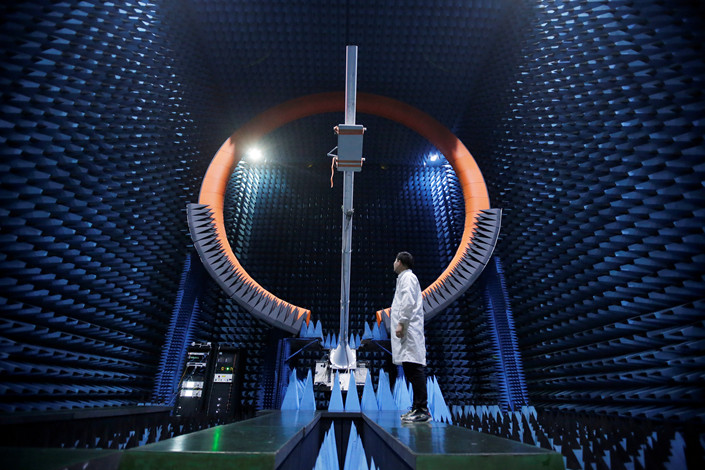 An engineer stands beside a Huawei 5G base station antenna in Dongguan, Guangdong province, on May 30, 2019. Photo: VCG

(Beijing) — China awarded commercial 5G telecommunications licenses on Thursday, intensifying a global race to deploy the ultra-high-speed wireless technology that will power a new generation of data-intensive services like autonomous driving and tele-medicine.

Just three days after announcing it would issue commercial 5G licenses “soon,” the Ministry of Industry and Information Technology (MIIT) held a formal ceremony to make the awards, according to an announcement on its website (link in Chinese). Recipients included the country’s three major wireless carriers, China Mobile, China Unicom and China Telecom, as well as the more recently formed China Broadcasting Network Corp.

All three big operators issued separate statements on Thursday to the Hong Kong stock exchange saying they had received 5G commercial licenses. “The company will carry out solid work on 5G network construction and business operations to provide customers with comprehensive, high-quality and efficient information and communications services, thereby supporting the company’s sustainable, healthy and high-quality growth,” China Mobile said in its statement.

China’s relatively rapid adoption of 5G contrasts with its more cautious approach to previous new wireless technologies whose networks typically cost tens of billions of dollars to build. Part of the faster pace for 5G owes to practical factors, since the technology will power many high-tech applications that could help China move away from its origins as a low-tech manufacturer into higher value-added products and services.

But a political element has also entered the equation, following comments in April from U.S. President Donald Trump on the necessity of making America a leader in the 5G field. The U.S. and a few other countries, such as South Korea and Switzerland, have already rolled out limited 5G commercial services. But China’s 5G efforts are still in the trial phases, with true commercial service not expected until next year.

“China and the U.S. are treating 5G as an important part of their national strategy,” said an official at one of the big three Chinese carriers, speaking on condition of anonymity because he was not authorized to speak publicly on the matter. “U.S. carriers have already started using commercial 5G, so China needs to make more effort.”

China is the world’s largest mobile market with around 1.5 billion subscribers. But many envision a future where devices — not humans — will be some of the biggest consumers of data by “talking” to each other and making decisions using artificial intelligence. New 5G technology can transmit data at least 10 times faster than most current 4G, helping to facilitate the kinds of speeds that will be required by such future devices and applications.

Despite the earlier-than-expected issuing of its 5G licenses, analysts pointed out that China’s three big carriers are unlikely to significantly speed up their own timelines for offering service partly due to the high costs involved. All three have already announced 5G spending plans for this year, including 17 billion yuan ($2.5 billion) by China Mobile, 9 billion yuan by China Telecom and 6 billion to 8 billion yuan by Unicom.

The three major operators are already coming under pressure due to slowing profit and revenue growth as China’s market becomes increasingly saturated and data prices drop. In the first quarter of 2019, revenue for the entire industry grew just 1% to 332.3 billion yuan, a slowdown of 4.1 percentage points from the growth rate a year earlier, according to the MIIT. All three of the big carriers reported declining revenue in the first quarter.

MIIT telecoms official Wei Leping acknowledged the actual rollout of services will take time due to factors such as high costs and the lack of readily available applications that can take advantage of such fast data capabilities. “With regard to 5G costs and technology, it will be impossible for 5G to have full coverage at the moment,” he told Caixin in an interview.