5G Licenses Coming ‘Soon’ to China, but Carriers May Not Rush to Roll Out Networks

By Qin Min and David Kirton 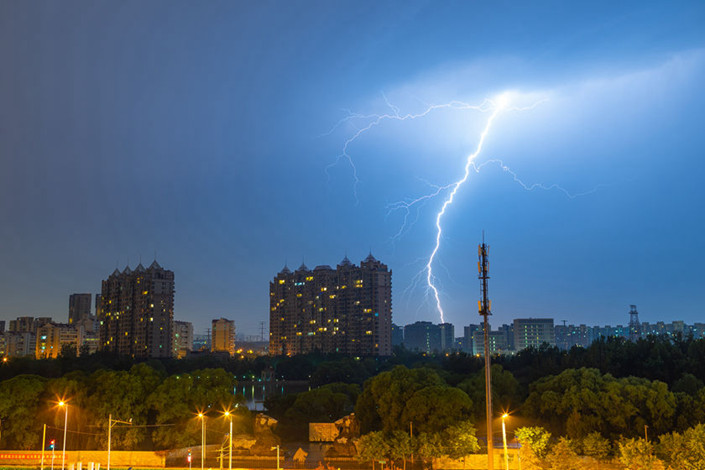 Lightning crashes near a cell phone tower in Beijing on Sunday. Photo: VCG

China is accelerating the rollout of commercial mobile 5G licenses in a bid to match the U.S. in the race to adopt the ultra-fast technology, but industry experts say persuading network carriers to pick up the pace will prove tricky.

“Global 5G is entering a critical period in commercial deployment,” the Ministry of Industry and Information Technology (MIIT) said Monday in a short note (link in Chinese). “The MIIT will soon issue 5G commercial licenses, and China will officially enter the first year of 5G,” it added.

While the announcement did not provide a clear timetable, MIIT boss Miao Wei said in March that he expected 5G licenses would be issued “at some point this year.”

A senior figure at one of China’s three major state-owned mobile carriers told Caixin “the licensing will happen very fast,” but he also gave no specific date. “After all, the Standing Committee of the State Council, China’s cabinet, has already discussed it,” he added.

China is the world’s largest mobile market with some 1.5 billion subscribers, many holding multiple accounts. In the past, it has been slow to roll out the latest iterations of new mobile communications technology, preferring to wait for it to mature in more advanced Western markets.

The government originally planned to enter the full commercial licensing stage for 5G next year, but is likely to have been inspired to move faster due to increased attention the U.S. is devoting to the technology, industry insiders said. “Both China and the United States regard 5G as an important part of their national strategy,” one said. “American carriers have begun to use 5G commercially, and China is bound to exert its strengths.”

The Trump administration last month announced several initiatives to push the development of 5G in the U.S., including plans to establish 92 commercial 5G deployments by 2020.

“The race to 5G is a race America must win, and it’s a race, frankly, that our great companies are now involved in,” President Trump said in a briefing. “We’ve given them the incentive they need. It’s a race that we will win.”

In contrast, while mentioning China’s “competitive advantage” in the field, the MIIT statement played up the international character of its 5G network, referring to the involvement of “Nokia, Ericsson, Qualcomm, Intel and many other foreign enterprises (that) have participated substantially in the technology testing stage.”

While the MIIT could bring forward the national licensing process, it may have a tougher time encouraging China’s mobile carriers to advance their own 5G rollout timetables, industry insiders said.

In March, China Mobile, China Telecom and China Unicom announced initial plans to invest 17 billion yuan ($2.46 billion), 8 billion yuan and 9 billion yuan respectively in developing their 5G networks this year. While they might slightly increase their investment, “the 5G commercial license issuance will not have much of an impact” on plans, a senior figure at one of the carriers told Caixin.

“Tallying the three major carriers’ investment in the 5G network in 2019 comes to about 32 billion yuan, with 80,000 planned 5G base stations,” a figure close to MIIT said. “Compared globally,” this is already a very large scale, he added.

China Mobile chairman Yang Jie said at a company shareholder meeting on May 22 that 5G will require huge investment and it will consider the rollout comprehensively and rationally. It is likely to resist being rushed.

Carriers are currently in an awkward position when investing in 5G infrastructure, said Wei Leping, executive deputy director of MIIT’s Science &Technology Committee. If they do not invest, they affect manufacturers across the entire industrial chain, he said.

And while they will invest for the sake of supporting wider economic growth, they worry about returns, Wei said, adding operators can’t expect any significant return from 5G in the short term.

Another challenge is the significant pressure facing Huawei, China’s largest provider of telecommunication infrastructure. It was placed on the official U.S. “Entity List” last month, a blacklist affecting the company’s supply of essential U.S.-produced components.

The “U.S. export ban on Huawei will likely eliminate (its) ability to supply 5G equipment in the next 3 to 5 years to any operators, not only the Chinese telcos,” Jefferies Equity Research wrote in a note. “On the other hand, if China relies on ZTE and Datang Telecom to build 5G massively, it will significantly raise the risk that the U.S. will extend the ban on the latter as well.”