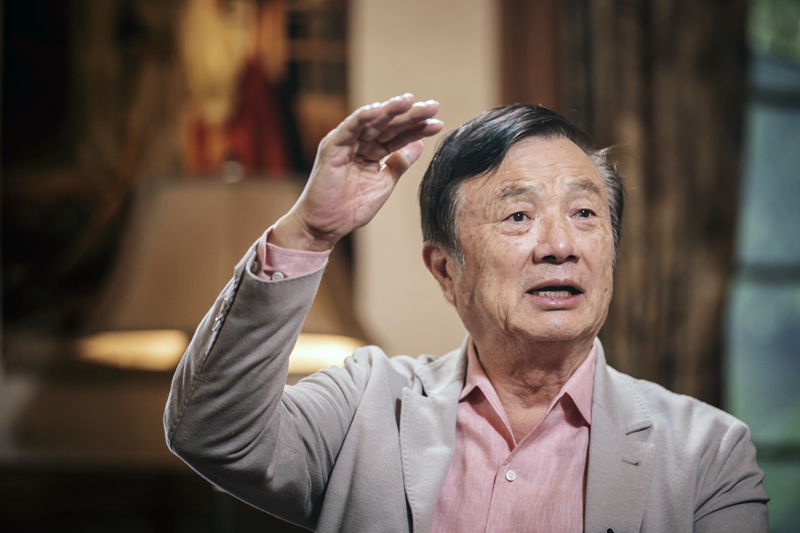 The 74-year-old Ren, who has maintained a low public profile for years, is now the most visible spokesperson of Huawei, giving interviews to global media outlets as investors closely parse his words for clues to the company’s business future.

Shenzhen-based Huawei, the world’s top telecom gear supplier and second-largest smartphone vendor, faces stiff headwinds in the U.S. On May 15, the administration of President Donald Trump put Huawei on an “Entity List” that would effectively ban the company from buying parts and services from American companies.

In an interview with Caixin May 23, Ren said he is relaxed because the company has long foreseen the conflict. Two days before he held a two-hour briefing with a group of domestic media.

The former military officer compared Huawei’s current struggle to the Long March of the Red Army in the 1930s, a key strategic retreat for the Communist Party to survive Kuomintang attacks and rebuild its strength.

“It won’t take so long for us to achieve victory,” Ren declared.

In the conversation with Caixin, Ren discussed Huawei’s preparations for the clash with America and his understanding of the company’s relationship with the U.S. He also shared his deepest concerns about Huawei and Chinese economy. The excerpts follow.

Caixin: How well is Huawei prepared for the U.S. ban? Are you worried that the ban could last too long? Is there anything that worries you?

Ren Zhengfei: We believe it will be a protracted war and never thought it would end shortly. We have been prepared.

I am very relaxed. The Red Army departed from Jiangxi province (in October 1934) with 300,000 people and arrived at Shaanxi (in October 1935) with only 9,000 people. But 14 years later, (the Communist Party) took over the whole of China. It won’t take so long for us to achieve victory.

We may contract our business. We have cut off some departments and strategically shifted (resources). We won’t make layoffs like Western companies do. Instead, we will close some departments and transfer the staffers to other places according to their willingness to make new contributions. There’s no panic when we cut departments for restructuring because people understand that they will fight on new battlefields.

What is the worst scenario for Huawei in your imagination?

Some reporters asked me, “What if my fuel tank or engine is hit? Your plane will be no longer able to fly.” I’d say it is absolutely impossible to hit my fuel tank or engine because I am adequately prepared. They may hurt our peripheral parts that we can give up, but there won’t be much impact in our advanced areas, at least in 5G technology.

Why did Huawei start the strategic backup plan many years ago?

We knew we would surpass our U.S. (competitors) sooner or later. If we didn’t think about outpacing the U.S., we would not have considered selling our company to a U.S. company (Motorola in 2003). But after the deal fell apart, our top management team knew that in at least 10 years, we would go up against the U.S. (in competition). It actually took 15 years for it to happen, longer than we expected.

We knew we had the capacity to surpass the U.S. and have been well prepared. When we meet at the summit, we may fight once or twice. But eventually, we will embrace each other. The moment, like the Meeting on the Elbe (between American and Soviet forces in Germany near the end of World War II), will be a joining of forces on information technology.

But when we foresaw the attack from the U.S., we never thought it would deploy state power and even lobby the world (to suppress Huawei).

(Editor’s note: In 2003, Ren held talks with Motorola’s then-CEO Mike Zafirovski on a potential sale of Huawei to the U.S. telecom giant for $7.5 billion. Both sides had signed a letter of intent when the deal was called off by Motorola after a top leadership shuffle at the U.S. company, over concerns about the high price.)

In which areas has Huawei surpassed its U.S. competitors and made them feel threatened?

We have outpaced them in all fields, especially 5G (the next generation of wireless technology). They will not be able to catch up for several years. If it were not for our world leadership in 5G, would the U.S. attack us?

But there is still a big gap between China and the U.S. (in terms of technology development). Huawei is an exception, and we are quite isolated in the Chinese tech industry. We have focused on ourselves and not been affected by others. It makes us independent but also easily prone to outside attack. If we had a strong ecosystem surrounding us, it would help us fend off some pressure when headwinds pick up.

How does Huawei handle its relationships with U.S. companies now?

We are still cooperating with U.S. companies. I was touched that at 3 a.m. that day (May 16), our rotating Chairman Xu Zhijun called me and said U.S. companies were rushing to ship (to Huawei) before the ban took effect, until they were exhausted. I was moved to tears and felt how good the American companies were.

What is your biggest concern now?

I am worried that the team may lose their faith and discipline. Every department must keep pace and maintain the order of the team.

If the U.S. pressure on Huawei continues, will the global technology industry be divided into two separate systems?

I can’t predict it. And I also don’t know how long the U.S. attack on Huawei will last. But we have prepared for a protracted war, and we will get back on our feet no matter how difficult it is.

The world will move in the same direction. The West is not satisfied about China because they took Germany and the U.S. as barometers that have undergone reforms for 100 or 200 years. But when we look at ourselves, China is completely different from 30 years ago. Only 40 years ago, our dream was merely to feed our people. The society is changing, and the world is moving toward convergence.

You have always said that China should learn from the U.S. Is there any change in your mind after all these setbacks?

If you want the country to be prosperous, you’ll need to learn from the U.S. Don’t let the emotion of hatred disturb the pursuit of development. Even now, I don’t hate politicians in the Trump administration. They are helpful because they beat us and forced us to grow. But it is a bit unacceptable that they lobbied other countries to pressure us.

We must learn from the U.S. on advanced technology and abandon the narrow mindset of isolation. The U.S. is the most-developed country, and its practices in education, law and institutional arrangements are all worth learning from. As a developing country, it is wrong for China to overemphasize self-reliance.

We should not fight with the U.S., as the world is entering an era of cooperation and win-win. Maybe after this conflict, there will be no more. For the U.S., if it closes itself and moves toward isolation, it will lag behind.

As you said, the world is moving in the same direction, so do you believe that the Trump administration is just a discordant note during the process?

Whoever does not converge in the world will lose. Even the U.S. can’t (develop) without others in the world. Its leadership is gained through trade and partnership with other countries, not weapons.

There will be another president after Trump, and the American system can make the correction by itself. If the next president can improve relations with other countries, restore confidence among investors and keep low taxes, the U.S. will become a more formidable rival, as it will attract all business to itself.

With the rise of artificial intelligence (AI), most of the AI-powered, advanced industry will move to the West, and those functions that can’t be replaced by AI will shift to low-cost countries like Vietnam and Thailand.

What’s your understanding about innovation in China?

Without innovations in basic research, there will be no platform for innovation. We can’t rely on other countries for basic research, as we will have nothing if they cut us off. We need (to made progress in) basic theories, like physics, chemistry, neurology and brain science.

You have repeatedly emphasized the importance of education in China.

Industry allocation will be increasingly divided in the next two to three decades as business shifts either to the more advanced Western countries or lower-cost countries in Southeast Asia. China must invest heavily in education to catch up with the developed countries and move up the value chain. Otherwise it will be trapped in the middle, as it will be no longer competitive in terms of labor costs and taxes.

Many of our policies are not suitable for attracting talent to China, such as the high income tax. The last global talent migration happened after World War II when 3 million Jews moved to Israel. Now there is a second wave of migration. While the U.S. turns inward, it is time for China to embrace the world. Why don’t we?

If you had another chance, what would you change about Huawei?

I wouldn’t do Huawei again because it consumed my life. I didn’t take good care of my parents. My father died because a bottle of expired drink he bought from a street vendor caused diarrhea, and my mother was killed in a car accident when she went to the farm market. I feel painful when I think about them. I also never had time to play with my children and accompany them as they grew up. I owe them too much.

But I am already on this path and can only continue. Who knew it could be such a bumpy road? At the beginning, we thought we could do well even as a small player. But in this industry, you can only survive when you become one of the top players.

How much do you think Huawei is relying on you?

One percent. My holding in the company will decrease from 1.01% to 0.95% this year. I thought to give up my veto power but decided to retain it after I saw what happened with Brexit. I feel a veto power is still needed to prevent possible chaos, for instance, when someone votes to sell the company. But the veto power won’t be my own. I’ll hand it over to a seven-member team.

How do you see the relationship between business and government in China?

The government is gradually reducing administrative intervention and moving toward rule of law. The number of lawyers and judges is increasing, and disputes should be resolved by courts. The Chinese economy is balancing and shifting toward market-oriented allocations of resources.