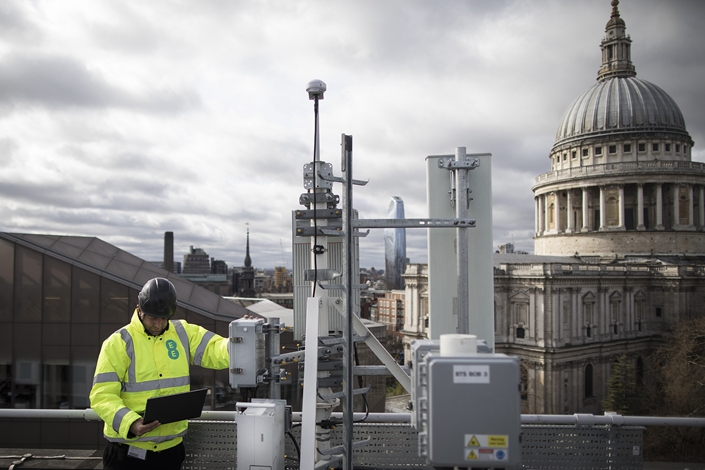 China’s embattled telecommunications giant Huawei got a bit of good news this week after a series of recent setbacks in the wake of a U.S. ban.

Huawei Technologies Co. Ltd. took a moment on Friday to acknowledge its own role in the launch of the U.K.’s first 5G network, even though Britain’s mobile phone operator EE Ltd. had said Huawei’s phones would be excluded from the launch.

On Thursday, EE, a unit of British Telecom, rolled out its 5G network, which made use of Huawei’s wireless antenna, in six cities in Britain — London, Edinburgh, Cardiff, Belfast, Birmingham and Manchester.

“In a close partnership with Huawei, EE launched U.K.’s first 5G network, putting it ahead of most other countries in the world,” the Chinese company said in a statement to Caixin on Friday. The statement cited EE’s CEO Marc Allera as saying that Huawei was essential in its 5G launch in the U.K.

The U.K. has resisted a call from U.S. President Donald Trump’s administration to stop doing business with the Chinese company, which the U.S. government has labeled as a national security risk. Earlier this month, the Trump’s administration placed Huawei onto its so-called “Entity List,” which effectively bans American companies from selling technology to Huawei.

In the latest blow to the Chinese company, SoftBank Group Corp.’s Japanese telecom unit said Wednesday that it has selected Nokia OYJ and Ericsson AB as vendors for its 5G wireless network. Huawei, which has been a long-time supplier of gear for the Japanese company’s 4G network, was excluded.

A week earlier, Japan’s largest mobile phone carrier, KDDI Corp., said it has delayed the launch of a new Huawei smartphone due to concerns about U.S. export restrictions.

The U.S. government’s move has led Google parent Alphabet Inc. to say it would comply by cutting Huawei from Google’s Android software, a move that would leave users of Huawei’s new phones unable to access apps such as Gmail and YouTube.

Despite the setbacks, Huawei got one piece of good news out of Japan on Thursday when Malaysian Prime Minister Mahathir Mohamad said at a conference in Tokyo that his country will continue using Huawei products “as much as possible.”

“Huawei’s research is far bigger than Malaysia’s capability,” Mahathir said at the conference, which was hosted by Nikkei, adding that the Chinese company had achieved tremendous advances over American technology.

In an apparent response to concerns — which Huawei has dismissed — that the Chinese government could tap the company to spy on other countries through its equipment in their networks, Mahathir said there wasn’t anything to worry about.

“Yes, there may be some spying. But what is there to spy (on) exactly in Malaysia? We are an open book,” he said, according to multiple media reports.

So far, Huawei said it has landed more than 40 contracts with mobile network carriers globally, including 25 in the Europe. The company’s two largest global rivals — Nokia and Ericsson — have 38 and 19 respectively, according to public information from the companies.

The story has been updated to explain why Malaysian Prime Minister Mahathir Mohamad said his country wants to use as many Huawei products as possible.