By Wei Yiyang and Flynn Murphy 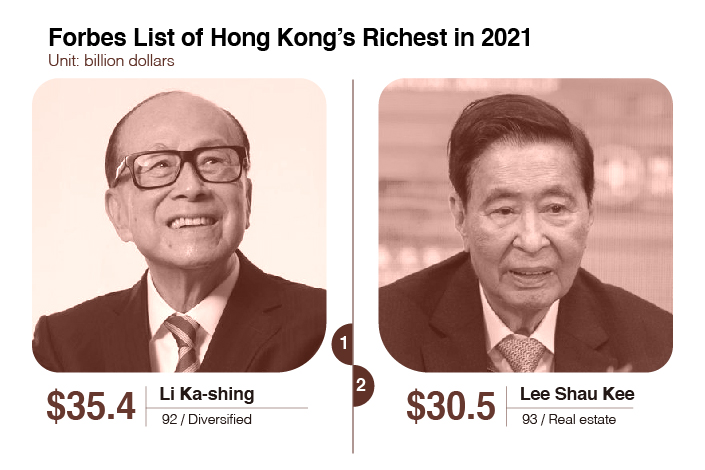 Spare a thought for Hong Kong’s property tycoons, who saw their wealth shrink slightly in 2020 amid an economic recession caused in part by the pandemic that battered the city.

Overall, though, the wealth of the city’s richest people grew 7.5% to $331 billion, according to the latest Forbes ranking of the region’s super-rich, even as the local economy contracted 6.1%, its worst showing since 1998.

Li Ka-shing regained his crown as Hong Kong’s richest man, gaining $6 billion this year as the pandemic raged, bringing his wealth to $35.4 billion.

Though the colorful tycoon is known for his property business, the roughly one-tenth increase in his wealth last year was driven by his early investment in internet video conference company Zoom Video Communications Inc., which became so hot during global lockdowns that a string of Zoom-related words were added to the Oxford English Dictionary.

Meanwhile Henderson Land Development Co. Ltd.’s founder Lee Shau Kee, who pipped Li last year for the top spot, fell to second place on the back of a softening property market. The real estate tycoon’s wealth was $30.5 billion on Feb. 5, according to Forbes, increasing by a mere $100 million or so from 2019.

Hong Kong’s housing prices, long a contributor to social unrest, fell last year — the first time they have done so since the 2008 global financial crisis. Though the decline was less than 1%, real estate stocks also slid.

Fifteen of the 27 rich-listers who saw their wealth shrink have portfolios focused on real estate.

The billionaire owners of smartphone screen glass firm Biel Crystal Manufactory Ltd. — Yeung Kin-man and Lam Wai-ying — jumped to fourth place when their wealth grew more than $10 billion to $18.6 billion. The couple are counted together on the Forbes list.

Other tech-linked figures did well out of the crisis too. Tencent Holdings Ltd.’s President Martin Lau’s wealth almost doubled to $4.5 billion, and he climbed from No. 35 to No. 21 on the Hong Kong chart, during a period when Tencent’s share price also doubled.

Alibaba Group Holding Ltd. Vice Chairman Joe Tsai’s wealth grew by $1 billion to $12.5 billion, but he dropped one place to No. 10.

In a sign of the times, the largest increase in wealth was held by sofa tycoon Wong Man Li of furniture manufacturer Man Wah Holdings, whose assets grew 200% to $6.3 billion, landing him in 14th place.

A bull market for Hong Kong stocks means some of the individuals named have grown even wealthier since Forbes’ cut-off, which was Feb. 5. The publisher said it compiled the list based on information from analysts, government agencies, individuals, stock exchanges, various databases and other sources.