By Matthew Walsh and Lin Yunshi 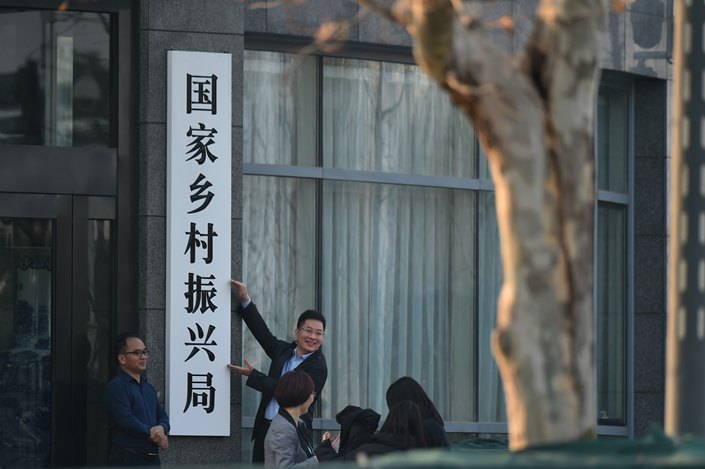 A sign bearing the name of the new agency is hung on its Beijing headquarters on Feb. 25. Photo: The Paper

China appointed a senior agriculture official to head a new national agency for revitalizing the countryside, as government leaders declared that a years-long campaign to wipe out extreme poverty was a resounding success.

Wang Zhengpu, a longtime Communist Party member who has held a string of posts in provincial governments and the agriculture ministry, is the inaugural director of the National Rural Revitalization Bureau, according to its website.

The bureau officially opened Thursday afternoon on the former site of the defunct State Council Office of Poverty Alleviation and Development in Beijing, according to the state-run Xinhua News Agency.

Earlier Thursday, President Xi Jinping said China had achieved a “total victory” in the poverty alleviation campaign, marking the conclusion of one of his flagship policies since taking office in 2013.

Details of the bureau’s remit are scarce, but it is likely to build on its predecessor’s work of increasing rural incomes, rejuvenating rural industry and preventing people in the countryside from slipping back into poverty.

At a government conference Thursday, Xi said China must work to “effectively link the consolidation and development of the fight against poverty with rural revitalization,” adding that reinvigorating the countryside “will be no less difficult in depth or breadth than poverty eradication.”

China must “accelerate the pace of modernization in rural areas and promote high-quality, high-efficiency agriculture; a livable countryside; and wealth and abundance for rural people,” he said.

The bureau is a “starting point for fully implementing rural revitalization and moving swiftly toward new lives and new struggles,” according to Xinhua.

According to his official biography (link in Chinese), Wang, who hails from East China’s Shandong province, joined the Communist Party in 1987. His political career took off in 2003, when he began working in the agriculture ministry’s finance office.

Wang returned to Beijing last month after spending more than a decade in the provinces of Liaoning and Sichuan, where he served in the Organization Department, a powerful and secretive agency that controls Communist Party personnel assignments.

Last year, he published an article in a party-run journal arguing that the government should revitalize the countryside by giving talented migrant workers incentives to return home — for instance by helping them set up their own businesses or find gainful employment.

According to government figures, around 99 million people in China’s countryside were lifted out of poverty during the campaign.

China, the world’s second-largest economy, still faces significant wealth inequity, for example between urban and rural areas as well as between the more-developed coastal and less-developed inland regions.