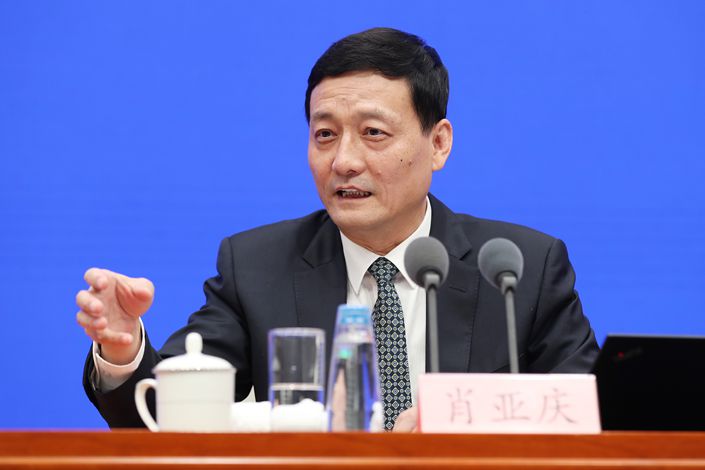 China’s telecoms ministry has fired a shot across the bow of smartphone apps that spy on users and steal their personal information, amid a nationwide crackdown on how tech companies gather and use sensitive data.

The Ministry of Industry and Information Technology (MIIT) has ordered more than 100 offending apps to be ripped from app stores in the past three months, said the head of the ministry, Xiao Yaqing, at a briefing Monday.

Xiao also mentioned the government’s plans to improve technology that oversees apps and identifies such issues, but did not give specifics.

“As we step up regulation in the sector, technologies designed to scrutinize these mobile apps dealing with personal information still need to advance swiftly,” the minister said at a press conference Monday, adding that the MIIT “must be able to detect loopholes in information protection.”

MIIT data shows that its app inspection platform automatically monitors some 80,000 apps monthly, looking for signs that they’re breaching user privacy. According to the ministry, over 500,000 apps have been inspected by the platform, 1,571 of which were ordered to make adjustments.

In China, app stores including various Android stores and the local version of Apple Inc.’s App Store are periodically ordered to remove programs deemed to have violated data protection rules as well as the country’s strict content laws.

Since the start of the campaign last year through to December, the MIIT has ordered the removal of 120 apps after they continued to misuse data collected from users without permission. Companies often use this data for marketing purposes or sell it to third parties.

Xiao’s comments are the latest in a string of statements highlighting official concern over apps that breach users’ privacy.

Last month, the MIIT said it was drafting new rules to crack down on app operators that don’t obtain permission before accessing devices’ microphones, photo albums and contact lists.

Xiao also stressed problems with advertising design, saying that “ads’ exit buttons are often deliberately hidden or hard to see, but should be obvious so users can close unwanted ads.”

App privacy issues and corporate data theft have been increasingly scrutinized in China as the nation prepares to enact legislation intended to protect personal data from misuse by corporations.

Read More
In Depth: The Fight Over China’s Law to Protect Personal Data

In November last year, the MIIT issued a directive calling on apps to collect only the personal data that’s necessary and within the scope of users’ consent. Representatives from a dozen tech giants — including Alibaba’s financial affiliate Ant Group, retailer Suning.com, smartphone-maker Xiaomi Corp., and online video platform iQiyi Inc. — attended the meeting at which the directive was issued.

Despite a regular chorus of criticism for exploiting user data without permission, some apps “still haven’t learned their lesson, and still suffer from the same issues,” senior MIIT official Lu Chuncong said at the meeting. As competition drives incentives for companies to skirt data privacy rules, some have delayed resolving their issues in order to maintain an edge, Lu said.

A string of high-profile data breaches in recent years has strengthened calls for the government to pass a unified law safeguarding personal information. In the first seven months last year, more than 8,000 apps and 478 companies were penalized for violating data collection rules.