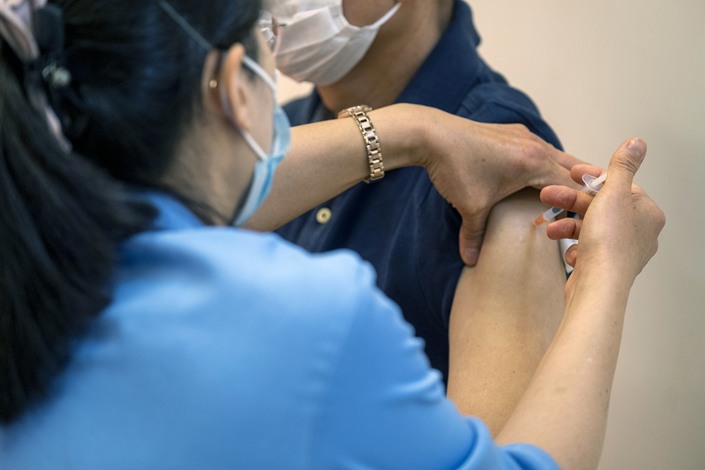 The sudden death of a Hong Kong man last week is highly unlikely to be linked to a China-developed coronavirus vaccine he received days earlier, according to an expert committee.

Hong Kong’s Department of Health said late Tuesday it had launched an investigation into a “suspected serious adverse event” following the death of a 63-year-old man on Sunday, two days after he received Sinovac Biotech Ltd.’s Covid-19 jab.

On Wednesday, the department said the committee had drawn the preliminary conclusion that the man’s death “did not have direct causal association” with his vaccination but needed the full autopsy report to make a final assessment.

Sinovac’s coronavirus vaccine has been found to be safe and effective in three phases of clinical trials. Post-jab adverse events are routinely investigated to ensure they are coincidental, and were not caused by rare unidentified health risks.

Hong Kong, which began vaccinating members of the general public on Friday, has not suspended the campaign during the probe. A spokesperson for the Department of Health said Wednesday that there was “no particular safety concern” around the Sinovac shot.

In November, Brazil briefly halted trials of the jab, also known as CoronaVac, following confirmation that the reported death of a volunteer was unrelated to the vaccine.

According to the preliminary report, the Hong Kong man was a heavy smoker with a history of diabetes, obesity, high blood pressure and heart disease.

He received the vaccine on Friday at Kwun Chung Sports Centre in Yau Tsim Mong district. On Sunday, he developed shortness of breath and sought treatment at the nearby Queen Elizabeth Hospital. He died the same day.

The preliminary autopsy report showed the man died from a heart attack and respiratory failure triggered by serious heart disease.

At a press conference Wednesday evening, Hung Fan Ngai, the convener of the expert committee, said the man’s death was clearly caused by a heart attack, adding that authorities would have suspended the vaccination campaign if they suspected the cause of death was related to a severe adverse reaction triggered by the shot.

People should understand their state of health before being immunized, Hung added. Hong Kong authorities discourage people with “uncontrolled severe chronic disease” and some other conditions from getting the Sinovac shot.

The most common side effects of the Sinovac shot are pain at the injection site, headaches and fatigue, according to a government fact sheet. The side effects usually disappear within a day or two.

In addition to the Sinovac shot, the government plans to deploy two more Covid-19 vaccines: one co-developed by Pfizer Inc. and BioNTech SE, and another by Oxford University and AstraZeneca PLC.