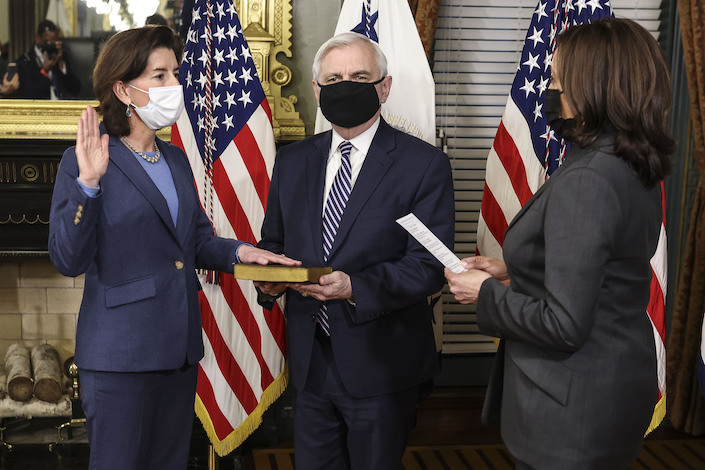 The newly sworn-in U.S. Commerce secretary defended the “entity list,” which prohibits U.S. companies from doing business with certain foreign businesses including China’s Huawei Technologies Co. Ltd., and vowed to use the list “to its full effect.”

The tough stance outlined by Gina Raimondo sends a strong signal that the Biden Administration has yet to ease pressure on China. The Senate voted 84-15 Tuesday to confirm the former Rhode Island governor’s appointment to President Joe Biden’s cabinet.

In an interview with MSNBC Thursday after she was sworn in as commerce secretary Wednesday night, Raimondo also pledged that the Biden administration will hold China to account for anti-competitive behavior and “horrific” human-rights abuses and will use all tools at its disposal to counter the “threat” that Beijing’s behavior poses.

“The entity list is a powerful tool,” she said. “Chinese telecommunications companies are a threat to American economic and national security. We’re going to use [the list] to its full effect.”

When asked during her Senate confirmation hearing Jan. 26 whether Huawei and other Chinese companies should remain on the restricted trade list, Raimondo didn’t specifically say yes or no. That prompted several House Republicans to ask their Senate counterparts to delay her confirmation.

Republican Representative Mark Green of Tennessee joined House Foreign Affairs Committee Lead Republican Michael McCaul of Texas in calling on the Senate to hold Raimondo’s confirmation until the Biden Administration gives a clear and direct answer on whether it planned to keep Huawei on the entity list.

Since then, Raimondo’s stance has toughened. In a written response to questions from Senate Republicans, she said she has no reason to believe that entities on the list should not be there.

“If confirmed, I look forward to a briefing on these entities and others of concern,” she said.

In the Thursday interview, Raimondo repeated her remarks from the Senate hearing that she would take an interagency and whole-of-government approach to holding a tough line with China, and she criticized China’s trade and human rights practices.

“China’s behavior is anti-competitive, coercive,” Raimondo said. “Their human rights abuses are horrific, and they need to be held to account for that” as well as for dumping “excessive amounts of cheap steel and aluminum into America,” she said.

She also indicated the Commerce Department has multiple tools. The entity list and tariffs are both defensive tools, she said, and the U.S. needs to “play offense” by investing in research and development, manufacturing semiconductors domestically and having access to the best-trained workforce in the world.

In a speech Wednesday laying out the Biden administration’s foreign policy, U.S. Secretary of State Antony Blinken delivered an even stronger stance on the “China threat.” Blinken said China is the only country with the economic, diplomatic, military and technological power to “challenge” the United States.