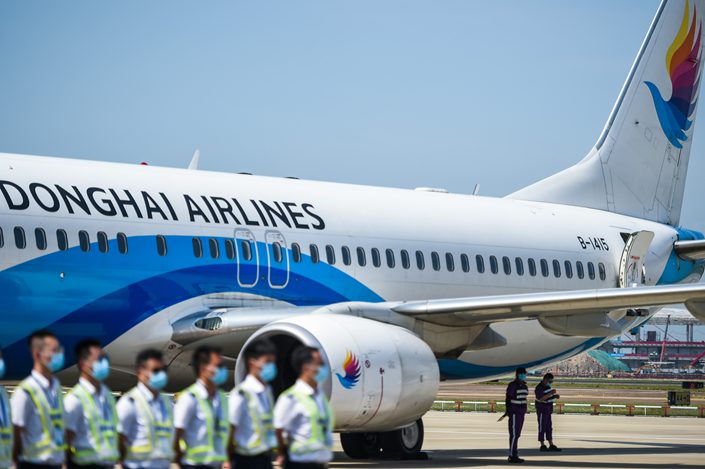 What’s new: A commercial airline captain and head flight attendant who scuffled in mid-air have been suspended from work, Donghai Airlines said in a statement, after news of the fight circulated on an aviation-focused WeChat account Sunday.

The fight broke out after a passenger was spotted in the corridor outside a bathroom used by the cabin staff, potentially jeopardizing flight safety, people in the industry told Caixin. The captain blamed the head flight attendant for not clearing his way to the bathroom and accused him of neglecting his duties.

The incident happened 50 minutes before the Donghai Airlines flight from the eastern city of Nantong, Jiangsu province landed in the northwestern city of Xianyang in Shaanxi province.

More Background: It is strictly forbidden for passengers to come near the cabin when the cabin crew is entering and exiting, veteran pilot Chen Jianguo told Caixin. On noticing that the pilot planned to use the bathroom, flight attendants ought to clear the area so “it seems the head steward is at fault here,” as it “it would escalate into a safety emergency if the pilot was physically assaulted,” said one industry insider.

Founded in 2002, Shenzhen-based Donghai Airlines owns 23 Boeing 737-800 aircraft that fly 93 routes connecting 54 cities worldwide. Its parent company East Pacific Group Ltd. set up Greater Bay Airlines in Hong Kong, which is expected to commence operations in the first or second quarter of this year at the earliest.

This is not the first time that rule violations by Donghai Airlines staff have come to light. In 2018, one of its pilots was suspended for 6 months and fined 12,000 yuan ($1,848) for allowing his wife onto a flight without a ticket and inviting her into the cabin.