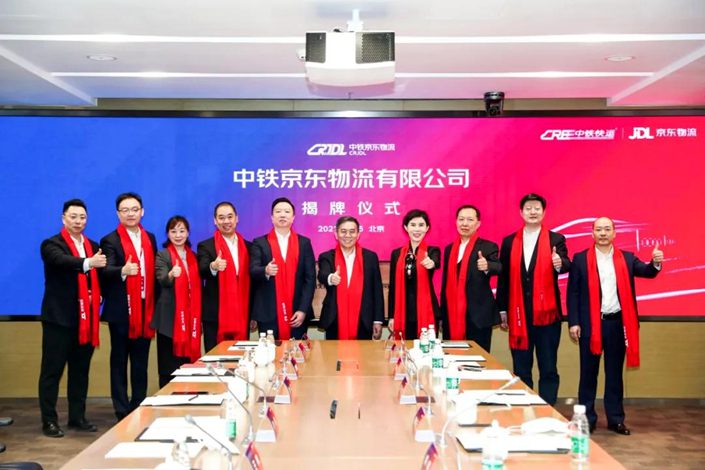 The logistics arm of e-commerce giant JD.com Inc. will form a joint venture with China’s national rail operator, as the money-losing pair seeks to take advantage of the nation’s state-of-the-art train network that includes tens of thousands of kilometers of high-speed rail.

China State Railway Group Co. Ltd., also known as China Railway, will own the majority 55% of the venture, while the remainder will be held by the money-losing JD Logistics, the pair announced on Friday. JD Logistics filed last month to make an IPO in Hong Kong, which would make it JD.com’s third publicly-traded unit, despite bleeding money since it began operating 13 years ago.

The new joint venture has 50 million yuan ($7.7 million) in registered capital and will focus on express deliveries, logistics for e-commerce and logistics-use equipment and information services, according to publicly available documents. China Railway’s share of the venture will be held by its existing express delivery service.

The two sides previously worked together to provide high-end delivery services for JD Logistics customers using China Railway’s high-speed trains that can travel up to 350 kilometers (217 miles) per hour. In its Hong Kong IPO prospectus, JD Logistics said its delivery network at the end of last year included 250 routes operated by China Railway, including 137 high-speed routes.

The tie-up marks the second for China Railway with a delivery company, as the state-owned rail operator seeks out private partners to better monetize its network that has left it burdened with billions of dollars in debt. China has encouraged such partnerships between state-owned and private firms more broadly in a bid to make the former group more efficient.

In its earlier delivery tie-up, China Railway formed a joint venture in 2018 with S.F. Holding Co. Ltd., one of China’s leading delivery companies. Similar to the JD Logistics joint venture, China Railway held 55% of that company while S.F. held the remainder. In its report for the first half of 2020, S.F. said that its high-speed rail and express network currently covered 74 cities.

Freight services have become an important income source for China Railway. Freight brought in 361.9 billion yuan in revenue in 2019, accounting for 44.3% of China Railway’s total.

The biggest single customer group for its freight services has been coal miners, which account for about half of China Railway’s freight shipments by volume. But China Railway has been trying to diversify beyond coal, due to the relative seasonality of demand and also the commodity’s dwindling use as China tries to reduce air pollution and lower its carbon emissions.