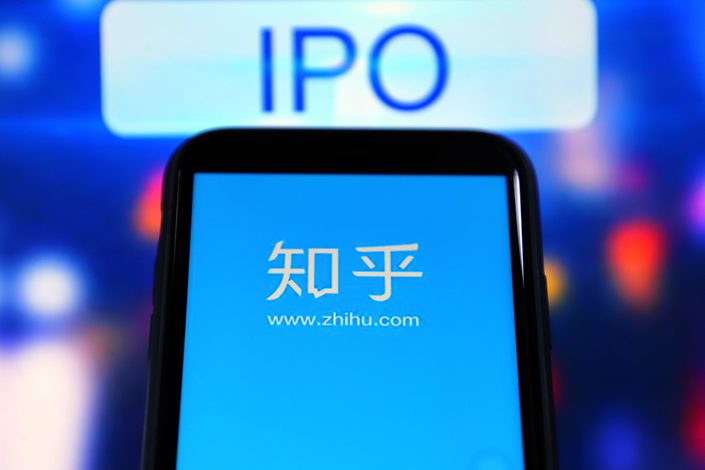 Zhihu is modeled on the U.S. site Quora, which was founded in 2009 by a former co-founder of Facebook and boasts more than 300 million users. Photo: VCG

Zhihu Inc., the Chinese question-and-answer forum often likened to Quora, has filed for a U.S. initial public offering, marking one of a dwindling number of Chinese companies seeking such listings in the face of scrutiny by Washington.

The still money-losing Beijing-based company, whose site encourages users to ask and answer questions from other participants, aims to raise $100 million from the listing, according to a prospectus submitted to the U.S. Securities and Exchange Commission Friday.

Zhihu bills itself as the largest Q&A-style platform in China, both in terms of monthly active users (MAU) and revenue. Users totaled 75.7 million at the end of 2020, according to data from research firm China Insights Consultancy.

Founded in 2010, Zhihu started off as an exclusive content platform where users only could join by invitation from other users. Three years later, it lifted the restrictions, setting off a period of significant user growth. According to its prospectus, MAU at the end of last year rose 33% from 56.9 million at the end of 2019.

The size and growth of its active user count has overshadowed a slew of domestic technology peers with similar products, including web-based content sharing platform Guokr Inc. and ByteDance’s Wukong Wenda, which was shut down last month after four years of operation.

Zhihu is modeled on the U.S. site Quora, which was founded in 2009 by a former co-founder of Facebook and boasts more than 300 million users. The latter firm remains a privately held, venture backed startup based in Silicon Valley.

However, the Chinese company has yet to turn a profit. Nonetheless, its direction of travel has improved. Zhihu posted a 337.5 million yuan ($52 million) net loss last year, less than half the 824.5 million yuan loss it had for 2019. Over the same period, revenue more than doubled to over 1.35 billion yuan during 2020. It says its continuing losses are the result of increased promotional spending, which rose 54.3% to 735 million yuan over 2020.

As of December, Zhihu has collected 315 million posts of questions and answers. More than 60% of its users are male, according to its prospectus while over two-thirds are under the age of 30.

The company has been seeking to diversify its revenue base by expanding into paid membership services from free, advertising supported ones. Advertising commission fees decreased as a percentage of total revenue to 62.1% during 2020 from 86.1% of revenue in 2019, while paid membership dues rose to 23.7% of total revenue last year from 13.1% in 2019.

The company’s IPO plans mark an early test of U.S. acceptance of Chinese consumer internet listings following passage late last year by the U.S. Congress of the Holding Foreign Companies Accountable Act, which requires issuers of U.S. securities to show they are not owned or controlled by a foreign government. The law also requires firms to allow U.S. inspectors to review corporate financial audits in what politicians claimed was an effort to guard investors against stock swindlers.

The company said it plans to use the proceeds of an IPO for further development and creation of its content and products and to expand marketing and research and development.