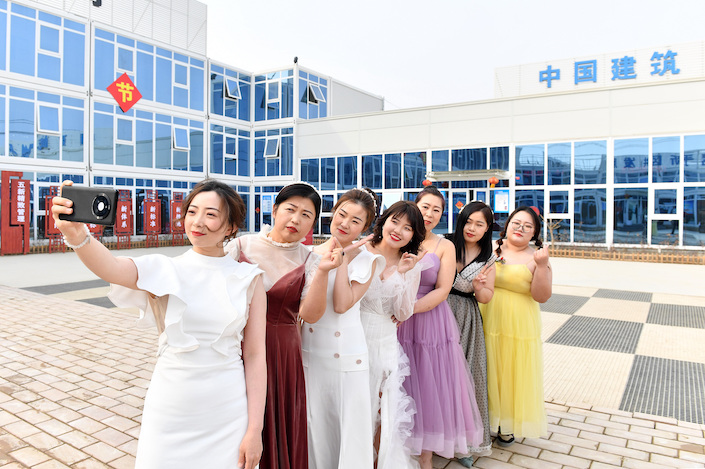 March 8 is International Women’s Day, which fell on a Monday this year. Although women’s status today demonstrates a huge improvement over traditional society, there is still a long way to go before complete gender equality is achieved.

Many people still believe that the head of the household and its main breadwinner is, by default, the man. A major indicator of this mindset is that children generally take their fathers’ surnames. However, the patriarchal society that so many take for granted is a byproduct of the agricultural revolution. Modern society is seeing its own revolution: The gradual displacement of manual labor by machines will fundamentally change the status of both men and women, making a return to “matriarchal society” a real possibility.

Of course, this matriarchal society would not resemble those of “primitive society”; instead, it would entail complete gender equality, in contrast to our current patriarchal order. Within it, the right to gender equality would not be attained through acts of condescending patronage, but out of respect and guarantees that match with women's overall capabilities.

Based on overall trends, women's comprehensive advantages will only become clearer. First of all, in terms of intelligence, women are in no way inferior to men. In developed countries around the world, women generally outperform men in academics. This is also the case in China. In 2019, female postgraduate candidates accounted for 50.6% of the national total, while female undergraduates in regular higher education institutions and adult colleges accounted for 51.7% and 58.7% of their respective categories' national total.

Women may also surpass men in terms of emotional intelligence and social skill. In addition, presuming that women and men are equally capable in other fields, women can give birth to children, while men cannot. This should not be seen as a liability but a gender advantage. Women also have overall better health and longevity.

Thus conditions for the return of “matriarchal society” are well in place. We can anticipate women’s status will continue to improve. But why hasn’t full gender equality been realized already?

The first challenge facing the return of matriarchal society is the marriage system.

Women in modern society have more power and independence; marriage and children are no longer a strict requirement. In developed countries, unmarried and childless women are common phenomena. Contrary to what one might think, the conventional thinking of the traditional marriage system actually perpetuates the declining marriage rate.

According to tradition, the husband goes out to make money while wife stays in and manages the housework. Outdated as this concept is, many modern people are still held under its sway. Thus when looking for a partner, women tend to focus on a man’s educational background, wealth and status, while men focus on a woman's personal characteristics — beautiful appearance, gentle personality, etc. This asymmetry in partner selection is a product of patriarchal society; it is incompatible with matriarchal society.

The problem is, most women looking for a husband still require that his education level and socioeconomic status be higher than their own. This is despite the fact that, in terms of education and status, women are surpassing men across the board. Few men are left who can satisfy their marriage requirements. The problem is only compounded if a man has a poor educational background and is still unwilling to do housework. Many women are not marrying simply because they cannot find suitable partners.

China’s transformation from an agricultural into a modern society has been incredibly rapid, but ideas about partner selection lag seriously behind. Thus despite the fact that there are many more men than women in China's marriage market, the marriage rate for well-educated and well-paid women is rapidly declining, leading to a sharp increase in the number of relatively older unmarried women.

A Decline in Fertility

In and of itself, the declining marriage rate is not a big problem. After all, in the traditional family structure, married life is hardly an optimal situation for women. But fewer marriages mean fewer births, which causes serious problems at the societal level.

As for China, the future situation will be even more extreme. The marriage rate in China's big cities is falling fast — dropping from 9.6% in 2013 to 6.6 % in 2019. Meanwhile, among Chinese couples who do have children, only half intend to have more than one. Thus China’s fertility rate will be much lower in the future than Japan’s is now, making China’s sub-replacement fertility problem the most serious in the world.

Traditional marriages and families are fading away. Perhaps it is an inevitability, considering the characteristics of matriarchal society. On the other hand, “no marriage” doesn’t necessarily mean “no births.” In “primitive” matriarchal societies, there was no marriage in the modern sense of the institution. But a woman could raise her children on her own, and members of her family would come to help. Marriage rates are low in Scandinavian countries, but single-mother families are also exceedingly common, and a relatively high proportion of mothers have multiple children. At the same time, the employment rate and status of women is higher in Scandinavia than anywhere else in the world, indicating that their society is, to a large extent, no longer patriarchal.

These cases provide useful references. In modern society, women have the potential to be as good as men in their careers. If there is still an expectation that women give up or delay opportunities for career development, they must be given adequate compensation in other respects. In addition, women bear most of the costs of childbirth, but the benefits are shared by all of society. Out of both necessity and fairness, women who have children should be given priority in social welfare.

In Scandinavian countries, women not only enjoy equal opportunities for development in all aspects (including an equal employment rate); they also avoid the low fertility trap. To learn from and apply the successful experience of other countries, China will need to update its policies quite dramatically. Compared with other countries’ input of 3%–4% of GDP, the investment required for China to address its low fertility problem may be much higher. As education and housing costs are a greater burden in China, it will need to input 5%–10% of GDP (in the form cash payouts, tax cuts and housing subsidies) if it is to raise the fertility rate sufficiently. In addition to financial subsidies, a series of supportive policies is also required.

• Second, expanding childcare services. China is suffering from a serious shortage of such services. If childcare institutions are lacking, one parent may have to give up working to care for their child full-time. But that’s easier said than done as more and more families can make ends meet only with the support of two incomes. According to data from the former National Health and Family Planning Commission of the People’s Republic of China, the national enrollment rate for infants ages 0-3 across various types of childcare institutions is only 4%. To match the 50% enrollment rate of developed European countries, China needs to directly and indirectly construct tens of thousands of childcare centers.

• Third, creating a friendly working environment for women. Enterprises must be encouraged to provide flexible working hours and locations for employees. Pregnant and nursing women should be allowed to work from home.

• Fourth, lifting restrictions on assisted reproductive technologies such as artificial insemination. For women, the optimal window for childbearing is before age 35. After that point, a woman who has not found a suitable partner may forever lose the chance to have a child — at least without access to certain technologies. Artificial insemination, human oocyte cryopreservation and other assisted reproductive technologies can help women older than 35 extend their windows of fertility. Of course, legal adjustment and standardization are also necessary.

The improvement of women’s status and gradual disappearance of patriarchal society are signs of progress toward complete gender equality. This is likely to lead to rapid declines in marriage and fertility rates. To relieve the ensuing population crisis, China needs to change its concept on the gendered division of labor and influence public opinion on partner selection. Even more importantly, it must enact welfare measures to assist women and families in raising children. Scandinavian countries have improved women’s status and social welfare while avoiding a low fertility rate. China would do well to learn from their experience.

Liang Jianzhang is the chairman and co-founder of online travel giant Ctrip. He is also a professor of economics at Peking University’s Guanghua School of Management.